4th Edition D&D is, like all editions of D&D, very much invested in the physical stuff your character carries around. I’ve talked about this in the past,where D&D finds it easier to use material objects to give you preposterous abilities, even though it’s ostensibly a game about wizards with preposterous abilities. In 4th edition, there was a formal, searchable databse for equipment that meant if you were the kind of player who wanted to find a specific, passive, always-on effect to put on your character, you could always find something to get your hands on – or in this case, in. 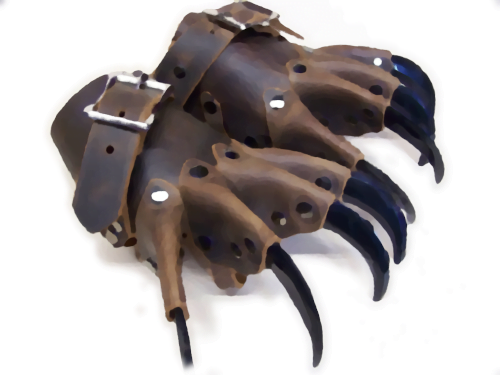 There’s a bunch of items that are designed to be Heroic tier prizes, items that are pretty cheap and have a really nice effect, but don’t scale up at all, usually in a slot that is either hotly competitive (arms) or tends not to matter much (boots). These items in Heroic tier are really nice – often things like Rushing Cleats or Badge of the Berserker will serve you really well and help you shape your character as you level up.

Claw Gloves are designed for druids, which is why they reference a specific keyword that druids get, ‘beast form.’ If you have claw gloves on, and you’re in beast form, and you have combat advantage against an enemy, your melee attacks are improved by 1d10. Combat advantage, something you already want, becomes extremely desireable when you’re dealing chunks of extra damage, and this is a passive property, meaning it’s not a sometimes food. Any time you can make those things happen, you have the extra damage.

Thing is, Druids aren’t the only ones who can get access to Beast Form, and thanks to the Werebear, Wererat and Werewolf themes, every other class can have a ‘beast form’ mode to their melee attacks. Once you get out of Heroic, into Paragon, the lycanthropes can just ‘always’ be in beast form, meaning there’s no reason to drop out of it, allowing for full time furry character interpretation (and it lets you define yourself how that looks). This means that suddenly, Claw gloves work just fine for Fighters, Rogues, Rangers and Battleminds. Anyone who does melee attacks and multiattacks gets a lot scarier when this one very cheap item in an underused slot is pumping extra d10s into their attacks.

What’s more, once you commit to going ‘well, claw gloves look cool, can I use them?’ you wind up at beast form, and then all those beast form feats stack up, and you’re suddenly presented with, say, a Werebear Grappling Fighter who tucks enemies under her arms as she wades across the battlefield, and when they try to escape she crushes them then throws them across the battlefield.

Claw Gloves are great, numerically, but the thing is that they serve as a thread you can search through for building your character, and that’s exciting. What’s more, if you don’t want to do that nonsense, you can just get handed the item, go ‘oh, that’s not for me’ and move on.

In conclusion, fear the furries.

The original art for the claw gloves I used is from a store called Stronghold Leather that appears to have since shut down and the only remnants of their work remains as pinterest boards.