In How To Be we’re going to look at a variety of characters from Not D&D and conceptualise how you might go about making a version of that character in the form of D&D that matters on this blog, D&D 4th Edition. Our guidelines for this kind of project are as follows:

This time, we’re going to try and capture the feeling of gender-flipping Martial Arts Death Machine Ranma Saotome from Ranma 1/2. 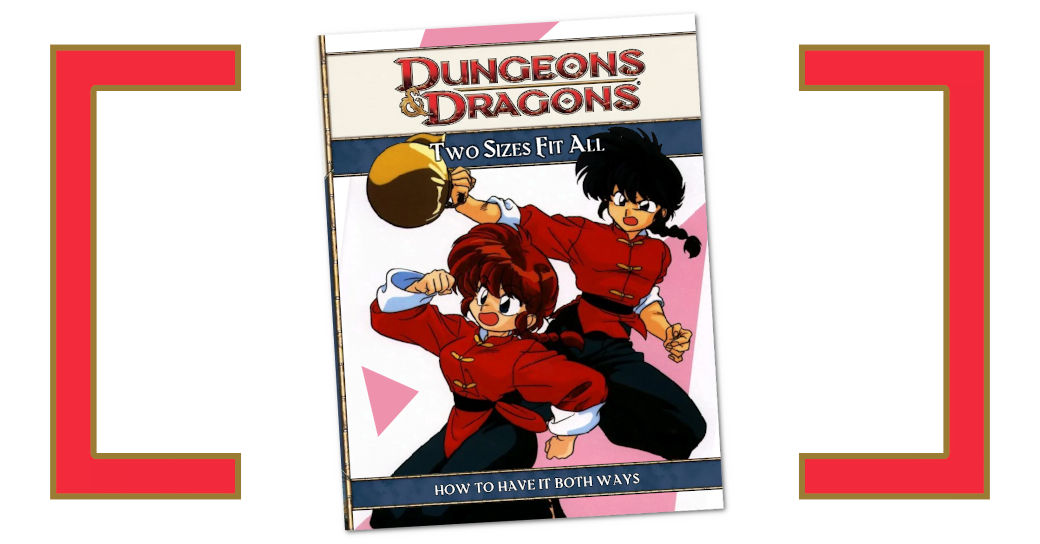 Oh hey, this isn’t going to fly well, but hey, uh, trans girl audience! I apologise ahead of time for your headcanons but I’m going to spend my time in this article referring to Ranma as ‘he.’ You can absolutely take all the advice I’m giving here and just apply it to your version of Ranma (and trust me, we’re going to end up somewhere weird). We’re going to wind up decoupling from “Ranma As Is” pretty quickly, especially since I seem to have a micro Master’s degree in the manga of Ranma 1/2, but that’s meaningless considering how many people got into the series from fanon, fanfic and the anime (but I repeat myself).

Alright, what do we know about Ranma ahead of time that seems attainable in D&D?

Well, the gender thing is pretty much going to need addressing head on. I can see three basic takes on the gender change for your table, and you’ll need to talk to your DM about it.

Any of these options work under the rules, so you can pick the one you like the best. Now, with that in mind, I can see three basic options for making a Ranma, and one… kinda off the wall one.

Thanks to being a complete doofus, there isn’t a lot to Ranma as a person than his martial arts. An immature, bratty kid, you can bolt almost any other stuff you want to, mechanically, to the character as long as you keep the core of ‘gender heckery and martial arts.’ Skill-wise, we know he can dress himself up pretty (so disguise is good), he can’t cook, he can survive on his own in the wild for a bit and he’s pretty clueless about most modern conveniences. The Umi-sen ken training suggests he’s probably a skilled thief (but doesn’t have to be) and he’s otherwise mostly just athletic and acrobatic.

Ranma overwhelmingly fights unarmed, though he doesn’t have to, and … that’s our baseline. He’s a real cipher when it comes to ‘not fighty!’ 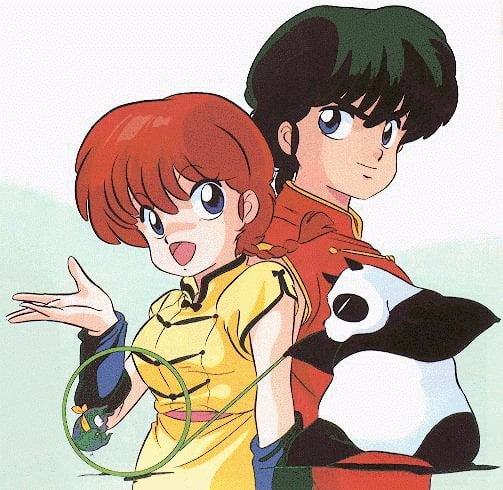 Well this was going to be obvious, wasn’t it? The monk benefits from Dexterity and Wisdom, letting you play a ‘fast, intuitive’ martial artist Ranma, or you could go Dex and Strength, and go for a ‘buff himbo’ Ranma. Monks move a lot, they punch a lot, they attack in melee and range. If you pick a Changeling, you do get an unnecessary Charisma bonus, but the Dexterity bonus will be handy for the Monk primary attack powers.

Monk Ranma lets you flurry people, it lets you do a whirlwind striking above and around you – this is a really good, basic option for someone who doesn’t want to have to manage complicated nonsense in a build, and where any power you like the look of is going to be good enough to take.

It’s quite reasonable to view Ranma as a meathead with a very disciplined body, meaning that the fighter can do most of what you need, letting you push stats into physical strength, con, and dexterity, and rely on the fact that Ranma is bad at convincing people of things and worse at remembering things to express your terrible mental stats.

There’s an option though for a fighter that feels more like a martial artist, from Martial Power, the Brawling fighter. Brawling fighters can hold a weapon in their main hand, then keep their offhand free, which gives you all the fighter tank goodness (you might have to aesthetic your heavier armour options away) along with the debuffing and control that comes with being a brawly fighter. You can pick up and put down weapons as you like them, as long as you keep one hand free.

The fighter’s really solid in general, so if you just want to get started, put some gauntlets on that are totally wraps and just pick general goodstuff, this build asks the least weird stuff of you and lets you control the area around you really well, which is one thing Ranma gets to do. Nice!

Fighter cons are that you do have to take armour, and Ranma tends to fight as well naked as he does clad and we see that, but lightly armoured fighters are an option, or you can flavour plate mail as a robe of dragonscale like Tarou wears.

Now here’s where things start to get weird. The Battlemind is a solid class, but it has some problems, not the least of which being it matures slower than most other classes. A level 2 or 3 Battlemind is not going to be as good at the Battlemind’s job (controlling damage) as a level 2 or 3 fighter. 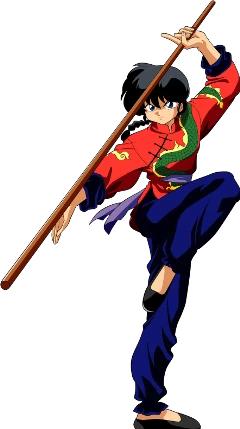 The Battlemind is built around Constitution, which is interesting and lets you play with how much of an indestructible meathead Ranma is, and it’s incredibly mobile with teleports that can be flavoured as ‘flash step’ style movement. It also knocks people down a lot, and it has the genuinely fantastic tank power Lightning Rush, which you can combine with a lot of different weapons including quarterstaffs, spears, glaives and so on to huck people onto the ground and throw them around the battlefield.

Now, the Battlemind’s unarmed options aren’t amazing – you do care about a good weapon that makes you better at hitting, and your best option to look brawly is to take gauntlets or spiked gauntlets. On the other hand, Ranma is definitely shown fighting with a staff, and you can easily flavour a special martial arts staff as a glaive or the like to get those synergies.

This is going to involve the druid.

Okay, so one thing Ranma has going on is that he’s been traumatised by cats; he’s very afraid of them, as part of his dad’s attempts to teach him a special martial art called the Neko-Ken (‘Cat Fist’). This is one of many ways in which Genma sucks ass.

But what if you wanted to play a catboy/catgirl/catenby martial artist? I have some good news for you.

First of all, you need to multiclass druid with the feat Initiate of the Old Faith. This lets you take on a beast form any time you want (which is also a minor action shift). Neat, but not fantastically exciting except for RP purposes. You could flavour your beast form as you ‘being catlike’ – maybe some kicat ears and a tail. Whatever.

This also opens up the extremely strong melee combat paragon path – I know, I know, the other builds don’t need paragon junk, bear with me here – Blood Moon Stalker.  This class gets to make more attacks, makes its attacks in beast form really scary and it’s all meant to make a druid’s beast form extremely strong.

Then for your theme you take one of Wererat, Werewolf, or Werebear. I recommend Werewolf. This lets all your attacks at level 10+ be done ‘in beast form’ even if they’re not druid beast form attacks. Grab some Claw Gloves.

All these things stack together, so now your monk runs around striking things with their hands doing a lot of damage, kicking people around when they do it, reroll bad combat rolls, and just able to turn into a feral cat form like Ranma does. 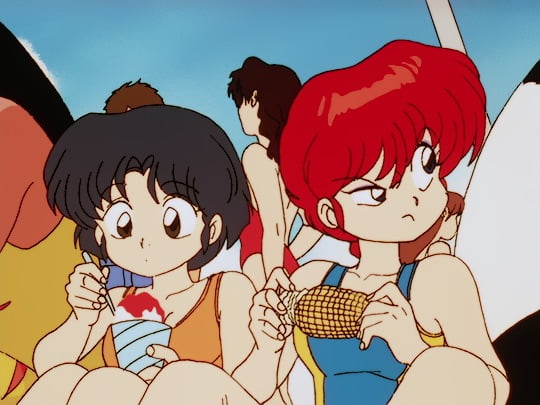 The Curse absolutely is something a character, in my opinion, can just have – at its absolute best, it translates to a +5 to disguise checks, and if your DM wants to be really twitchy about it, you could set up a special disadvantage where if splashed by your curse counter-agent (hot water in Ranma’s case) you now have a -5 to disguise checks.

If your DM’s a dinghole about letting your character hop around gender-wise, send them my way and I’ll call them a dinghole for you.