The identity of the people of Newfoundland is a super interesting, complicated one where you have what basically amounts to a cultural group from within a colonial power that are marginalised and mocked on an institutional level with the possible stealing of a national referendum to join Canada and there’s a lot of super interesting, super complex political stuff going on there that I am not qualified to talk about and most people know primarily, if they know anything at all as hey it’s about that place where the Canadians talk funny, b’y!

Yet, Newfoundland is also a place with a beautiful linguistic culture, an interesting history, an all-too-familiar colonial history, and, now, it is a place where people live, and grow, and have pasttimes and interests and hobbies, and play games, an example of which is Newfoundland Jam, a card game from, uh, Ontario, but made inspired by the creator’s Newfoundlander mother.

I was pretty cool on this game when I first saw it – I showed it to a Newfoundlander friend of mine, wondering about their reaction – and when he spent ten minutes reading up about the game, saying it sounded great, laughing about it, and sharing some slang, well, I pulled out my phone and ordered a copy of the game while I was in the car. 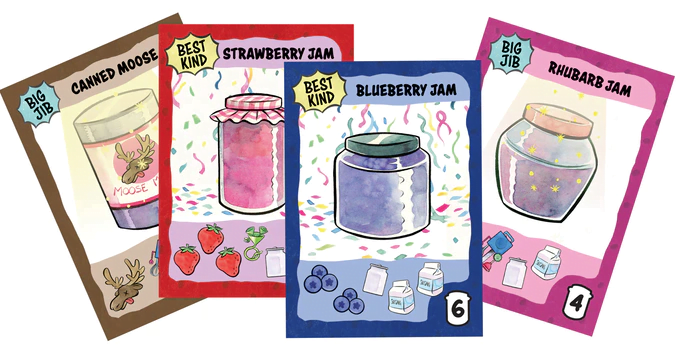 Newfoundland Jam is a card game about staying in while it’s cold outside, and making some jam! That’s it, that’s exactly what you get!

If you’ve ever played a set collection or even trick taker game, you’re going to quickly grok this game. You have cards in hand, there are cards on the table, you’re trying to hit a score by collecting sets of cards. All these mechanics are basic and even classic. Rummy and Gin both use the same basic mechanism, it’s just this is a lot more colourful and there’s a larger variety of interchangeable parts.

You have some goals on the table, and you’re drawing cards and cycling the yard and trying to strategically pick up the cards so you can get, you know, a set that works for you. Easy peasy. Thing is, often when getting games, it’s worth thinking about what versions of things you want. What’s this got to pull you to it?

If you have other set collection games, with other layers or systems of games on them, and you like that level of sophistication, you definitely won’t want Newfoundland Jam. It’s a simple game! That’s okay! But if you want a simpler game to play with kids (like I do), or if you just want a theme that’s less stressful, that’s also good. Finally, Newfoundland Jam is very charming and comes in a really nice box.

That’s not nothing! The box being so nice makes it easier to keep and easier still to take with you places. 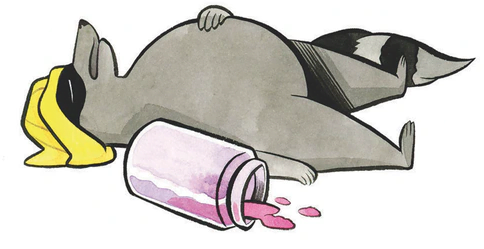 Hey, but this is a bit short, right? A few words on how fond I am of Newfoundland, a bit of a summary of ‘ey, it’s a bit alright,’ and that’s it? Well, because I play this game with kids, I want a cooperative mode. The game rules do not by default have it, this is my own addition.

To play Newfoundland Jam co-op, here’s what I do:

That’s it! This does make the game a lot simpler and a lot easier, but it also makes it so nobody needs to lose, which maybe is something you need in a shared puzzle game.