You know, last year we did a bunch of characters who could be seen as fitting the genre of a combative adventurer reasonably well, and maybe it’s time to try some stuff that’s a bit more weird. With that in mind, let us reach wide, with our tiny, tiny arms, and look at ME GRIMLOCK! 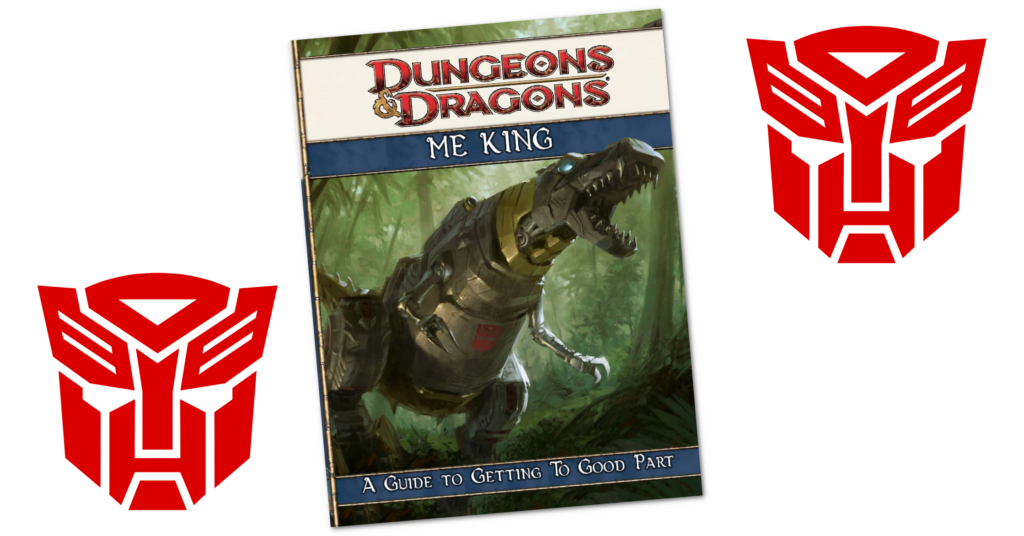 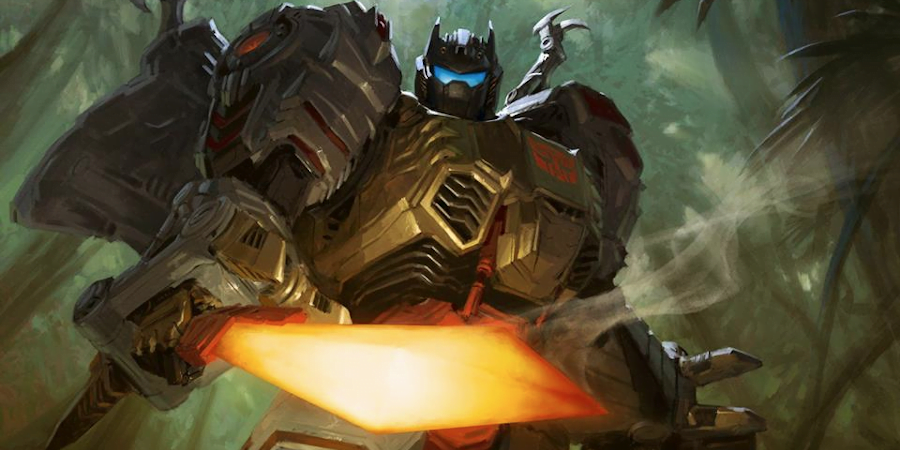 Grimlock is a character with an extensive history in a variety of canons, which you can chase down with a couple of good sources. There’s the Telatraan-1 Wiki, which is funny and comprehensive in ways that are both unhelpful, and Chris McFeely over on youtube has done a 13 minute explainer on the character called The Basics On Grimlock. What I’m going to present here is a sort of overview of my totemic idea of this character, which is based out of my favourite versions.

First, I really like Transformers Animated Grimlock; he was a big shovel-jawed dinosaur, he was much larger than other transformers needed to be because he was made to be an accurate model of the T-rex. Consider that of the Animated crew, you have an SUV, a motorbike, and a Peterbilt style truck, the tallest of which being the truck which is around 4 meters tall, while a T-rex is around 4 meters tall at the hip. Obviously, scale is always a problem in these shows – Optimus and Grimlock, transformed are shown to be about the same size, which is more of a reference to the notion that these characters are roughly equal in their footing and potential threat, their physicality expressed in other things like their fairly comparable body structure. Is this important? No, it’s not, but I bring this up because I care. That’s my primary thinking – Grimlock in Animated is big, and dumb, strong, and let’s be generous and say he’s defensive. In this incarnation, because he’s built around being a toy, he has a sword, which doesn’t get used much.

If we go to wider sources, if we look at him in Generation 1 Cartoon, we more or less get the same thing – he’s a big dumb idiot who hits things very hard and thinks he should be able to run the Autobots, because he’s big and strong. Sometimes he doesn’t look at ‘strength’ too clearly, because it’s an established point in lore that transformers like Devastator and Metroplex are materially stronger than he is, but well, like I said. Big dumb idiot. He also has a sword.

Finally if you look to Robots in Disguise, there, Grimlock is still pretty dumb, but he’s less ambitious and more a big, friendly brawler. He fights because he likes to fight, and more than most other incarnations, this version of Grimlock is most likely to be seen in his humanoid form, with his expressive face and hands. This form’s toy has a sword and shield, made of tail and back sections.

In each incarnation, he has flame breath.

Oh, and I guess, since I am kinda burying the lede here,

Alright then, let’s look at what we can find to unify this character.


Look, I think we’re going to be able to get anything here done, as long as we can address the question of how do we make him into a robot tyrannosaurus rex. 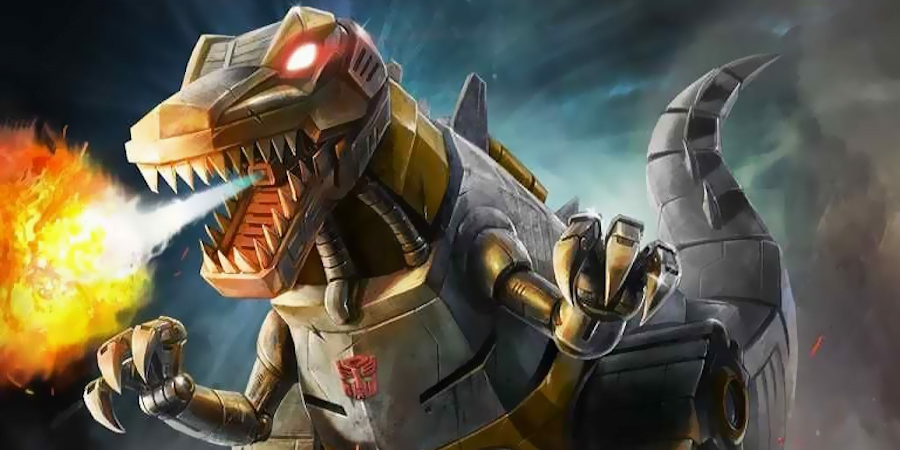 Now, we’ve done some stuff with claw gloves in the past, so you may know, already, where we’re headed – this is going to involve heading into the space of a beast form. The thing is, shapeshifting in 4e isn’t like it used to be back in 3rd edition. When you shapeshifted, back in the day, you didn’t actually default to looking like the thing you shapeshifted into – I know – but instead you got a bonus to disguise checks to look like the thing. That meant that, if that disguise check failed, people looking at you would know what you were.

4e doesn’t explicate that; shapeshifting is a lot more vague about things, and rather than specific rules setting things out, you are assumed to be identified as what you are. People looking at you can look at you and go ‘oh, that character is an Eladrin, or a Deva, or a Tiefling,’ and disguise is no longer handled by a single large skill with all these factors. On the one hand, that’s good, because disguise was bad and yielded some dumb effects where you could somehow tell the druid you were looking at who had wings and feathers and a beak was in fact, a gnome, as if there was a gnomishness that persists through even layers of form. That’s all weird.

4e takes a rule that descriptive text is just descriptive. There are some rules about taking on a disguise as an animal, but in a number of cases, the rule is that when you shapeshift into a form, the way that form looks is completely under your control. With the mainstays of claw gloves, the werewolf and werebear, they do specify that you turn into a bear or a wolf. In this case, you can definitely talk to your DM and say ‘hey, can I pick the visuals of a dinosaur instead?’ and you’ll be fine. We’ll get into that in the specific builds.

With that in mind, what we want to look for is a class that:

That’s pretty general! We’ll see a few possible choices here. We do have an important aesthetic: The Warforged. See, polymorphing a Warforged into a form that isn’t specifically going to look like something else means that the details of what you are – a warforged – is always clear. Therefore, if you’re a warforged who say, turns on a Guardian Form that channels the spirit of the wolverine, you’re going to look like the wolverine spirit but also like a warforged.

And that’s what we want.

Whatever the builds are going to do, they’re going to be Warforged, and we’re going to see how we can make the character transform into a T-rex.

Remembering that our builds need to be operational as soon as possible, nothing gets off the ground as quickly as the Warden. Pick your daily attack power and boom, your Warforged is absolutely primed to go ham on people; you transform into dinosaur form and immediately charge into people. The warden also has stats that line up well with the warforged – take constitution, take strength, and just go for it.

You can pick up powers later that represent the flame breath – I like Forge of Fire and Smoke and now you have a sometimes-food flame breath that also hits pretty hard!

There is a tiny bit of a bummer there, though: The Warden doesn’t really benefit from a sword, and there are some Warden builds that really like having a mace or axe.

Man, Fox hates when I suggest this. But, as far as out-of-the-box functionality goes, the kind of approaches that fit the postulates defined at the start, where you can start being this type of character with as few choices taken up and get on to playing quickly, well, the Knight is our best choice.

For the Knight, the choices you have to make are pretty simple: Take Werebear (asking your GM politely if you can look like a warforged/dinosaur hybrid, and therefore, a robot dinosaur), take Knight. Now, your character is predominantly going to be spending the first round of combat doing a minor action to transform, then going to town on people with your Werebear natural attacks, that mark everyone you hit. Knights don’t have a mark by default – they have a defender aura (which does still work while a bear).

Weirdly, a werebear knight can do lots of the same things they already do – they can even swap stances. They can’t Power Strike, and the werebear natural attack isn’t a weapon attack, so you lose that benefit.

This build slacks off a little  as you level up – you will eventually want weapon properties. You can get some ways to boost your tohit, but mostly, this build will be 1-2 points of tohit behind other characters from level 3 or so onward. There’s a sort-of-junk drawer option here, where the Pack Outcast gets you a melee bite attack at level 1, which can inherit the enhancements of your weapons.

The reason to go werebear, though is that the utilities are nice (and include things like ‘automatically save’ as a utility power), and at level 10, you can start getting the benefits of your sword and shield in beast form, and can pick up beast form abilities.

The druid’s biggest problem is that it’s not a build that relies on the strength stat. It’s wisdom and, for a Grimlocky style one, constitution – you want to go Swarm Druid. If you can let slide that you won’t necessarily be the strongest deadlifter of a grimlock, you can still get a build here that really emphasises the way Grimlock is a great big dumb tough goon of a dinosaur.

It is entirely possible – likely even – that you can build your druid so they live in beast form and transform into human form for complex tasks. This build does rely on wisdom, so it’s not quite the same feeling of immense dumbass, but you can make it a sort of ‘cunning predator’ Grimlock. Hunt and stalk your foes, use swarm form’s toughness increase to take hits, and use the Beast Form powers to move around, knock people down, and lock single opponents down. 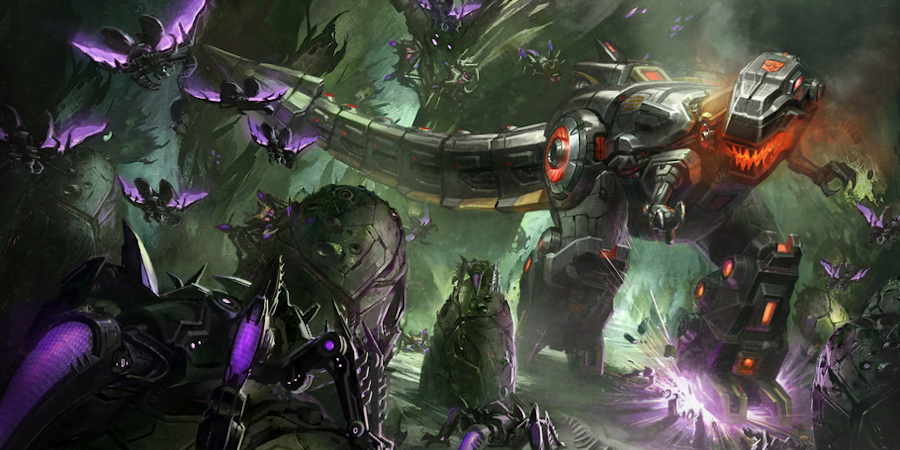 There are a lot of better options than the warden and knight, but they don’t really mature outisde of Paragon. If you can start as a level 10 werewolf or werebear, then you’re much better off taking a melee, unarmed character like a monk, vampire, or brawler fighter. There’s also the case that Grimlock treats his dinosaur form as a default and his humanoid form as a rare tool for use – and there’s no reason you couldn’t treat something so modestly as a simple ‘odd looking Warforged.’ 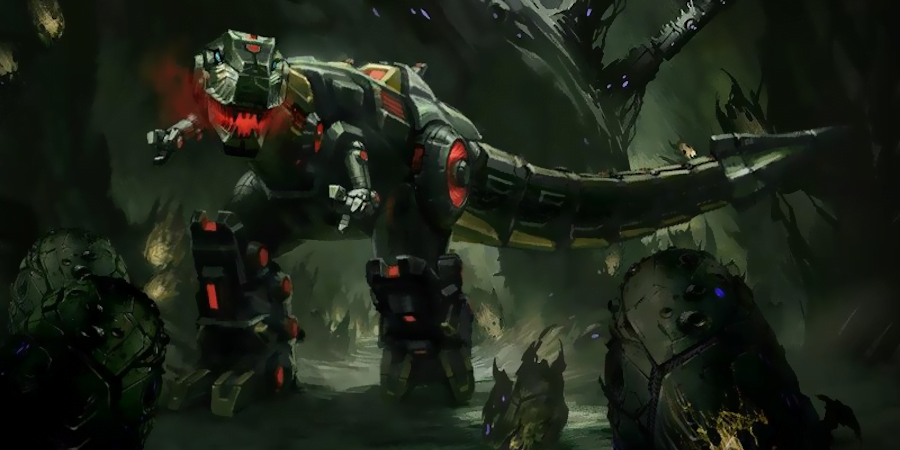 This build is one that’s about trying to find ways to get a visual aesthetic within the guidelines of the rules without making that aesthetic entirely arbitary. That means looking at the way these kinds of things appear in the game, then seeing what can be done to match it.

It also involved going over and double checking some fairly deep rules – after all, I thought at first it’d be easy, because by a dumb overlap of rules, a warforged that shapeshifted back in 3.5 would be obviously a warforged if their disguise skill was poor enough. That meant that there was a notion of tanking your charisma to keep your Bluff low, but – as we now know, that’s not how things work.