You know what let’s trot out a silly personal fan theory based on a tiny window of time. In this TED talk, I will explain to you that the Generation 1 Transformers known as the ‘Stunticons’ are four trans girls dealing with an abusive father figure who wants to keep them closeted.

Content warning, I’m going to talk in a general way about how much Motormaster sucks and about some queer stereotypes, but everything is done in the name of fun and I’m not trying to get you to consider Something Very Serious.

The four non-leader members of the Stunticons represent four major archetypes of queer trans girls, each one closeted and handling that closet in different ways. These members are Drag Strip, Dead End, Wildrider and Breakdown. They all turn into cars, and unlike most of the Decepticons, they were created as vehicles on earth, then imbued with life from Cybertron.

They are also all trans girls. 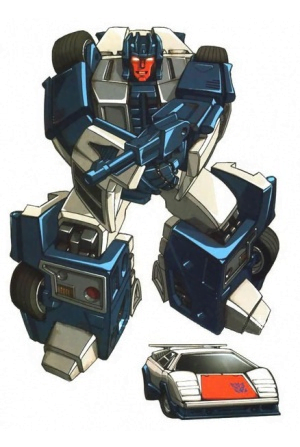 Breakdown is paranoid. In the original guidebook, she’s described as terrified that everything around her is looking at her, worrying about whether or not she fits in or is a believable car (‘passing’ as a car). What’s more, her paranoia results in intense anxiety – she breaks down under the strain of maintaining her facade regularly. In fact, she vibrates at a frequency that means cars around her break down too!

Breakdown has the tone of a girl with a private twitter where she is able to be ‘she’ and everything she’s doing in her day to day life is layers of protection ensuring that that identity gets to remain safe and hidden. She thinks there’s nothing weird about being a girl on the internet and why, everyone does it, I mean, it was the first thing she thought of doing, wouldn’t everyone, why are you asking questions like that? 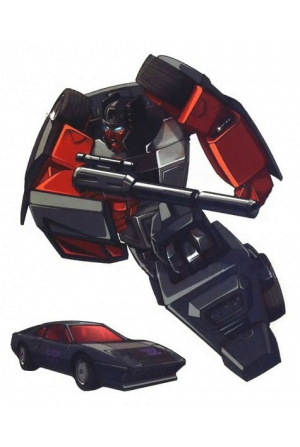 Wildrider is a complete goon, a violent thug who throws herself into everything as a form of reckless self-endagerment. She’s good at what she does – amazingly so – but part of what lets her do that is a complete indifference to the way what she’s doing hurts her. Without any reason to love her body and what it represents, Wildrider acts not only without concern for her safety but with a desire to weaponise her self-destructiveness. Come break me, she shouts at the world.

Interestingly, Wildrider is also one of the characters to have a potential deadname – she’s also gone by Brake-neck, but that name doesn’t appear in the G1 stories that I draw from with this interpretation. 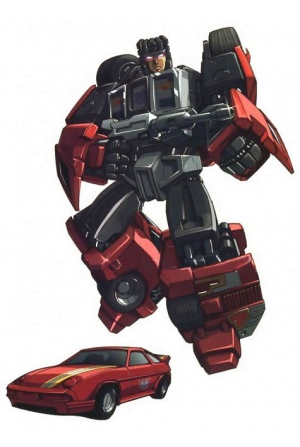 Dead End is melancholy but also extremely focused on looking good. Endlessly caring for her carapace and shell gives her something to focus on, and she wants to live – when she’s put in a fight for her life, she even perks up. Dead End is aware of how attractive she is, and the stock others put in her beautiful car mode. But despite her time spent trying to not die and look good, she has taken refuge in a personal narrative of the pointlessness of all things. 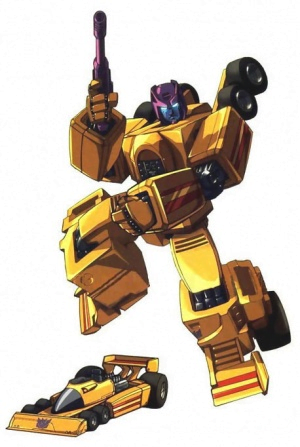 Finally, there’s Drag Strip, who is a preening self-important diva. It’s not enough that Drag Strip is good at her job of going fast, she wants to be the best. Whatever it is she can be faster than, she will do it; she’s obssessed with drag, of course, which isn’t what the creators of the character meant, but well, that’s the life we’re in now and this is how it is.

Still, Drag Strip is amazing at her job, she’s really hot, and she is overjoyed whenever she can be obnoxiously exceptional at something. There’s a drive in Drag Strip to do something well, a lot of energy directed at becoming legitimate in some way.

These four Stunticons are under the control of Motormaster, their boss, who sucks, and who explicitly manipulates them using their various mental problems; he preys on Dead End’s depression, ensures Drag Strip feels inadequate, insults Wildrider’s performance and even periodically spies on Breakdown.

Based on these findings I would like to suggest that all four of these characters are, in fact, trans girls who need to get given the opportunity in story to murder Motormaster (as he is a Bad Dad) and flee to be free on their own, and happy, away from the war of Megatron’s wanting.

Let! The! Stunticons! Be! Pretty!

In the end, all I’m really saying is ‘parents that don’t support their queer kids are going to mess them up, and that messup is going to express itself in a lot of different, messed up ways.’ Please don’t think I’m saying that all the trans girls I know are some mix of paranoid, overachievers, depressed or reckless. Trans people are multitudes and every one of them has their own lovely, beautiful story.

This little exercise here mine and mostly because I think that these characters in G1 are kind of one-note except for being mentally unwell, and it’s incredibly easy to find queer readings in almost any media you like, if you bring that knowledge with you.