In How To Be we’re going to look at a variety of characters from Not D&D and conceptualise how you might go about making a version of that character in the form of D&D that matters on this blog, D&D 4th Edition.

When building characters in 4th Edition it’s worth remembering that there are a lot of different ways to do the same basic thing. This isn’t going to be comprehensive, or even particularly fleshed out, and instead give you some places to start when you want to make something, to give you a place to start.

Another thing to remember is that 4e characters tend to be more about collected interactions of groups of things – it’s less that you get a build with specific rules about what you have to take, and when, and why, like you’re lockpicking your way through a design in the hopes of getting an overlap eventually. Character building is about packages, not programs, and we’ll talk about some packages and reference them going forwards.

So for our first excursion into this idea, we’re going to start with Hil-Da, Hil-Da from Fire Emblem 3 Houses. 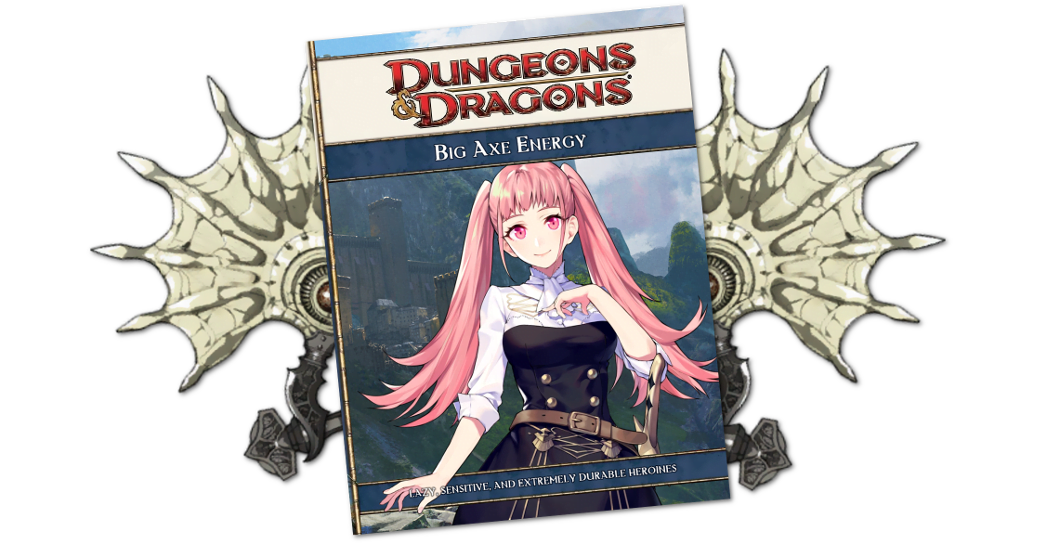 I picked her because she’s both algorithm-relevant, and because a character with a couple of different versions works out well for character building in D&D 4e. Fire Emblem characters need to be seen in light of not just what they kinda project, their vibe as it were, but also the choices that players can make in building them.  I may look at Edelgard and see a featherweight damage spike, but that doesn’t mean she didn’t tank hits for you in your play through.

When I started this, I had no idea about this character. I don’t know her, I haven’t played this game, and I am not interested in getting around to play this game. Fire Emblem games taken from the outside look like murder picross, where it’s hard to know how to make them work properly, but you can be absolutely certain that some math genius out there knows a perfect route through what you just struggled through.

Still, Hilda is one of two characters from Fire Emblem 3 Heroes who stands out to me when my friends talk about the game, and there’s some clear expression of her personality out there that I can work with. There’s a good wiki source to start from and there’s tons of fanart showing a fairly consistant tone even if it’s interpreted differently from player to player.

What I can tell you about Hilda from a wiki dive:

These are the things that I can work with mechanically. Some elements like her being cute, vain, spoiled, short, hard to motivate, charming or fond of tea, those are all elements that can be folded into how you flavour existing mechanical choices. 4e is pleasantly solid like that.

With that in mind, here are three different ways you can be Hilda in 4e D&D

Option 0 – Stuff For Everyone

One part of all these packages you’re going to see is the weapon execution axe. This is a 1d12 weapon with Brutal 2 and High Crit, and it requires the feat Superior Weapon Proficiency. This is one of the best axes for feeling like you’re doing big, meaty two-handed hits in the game, and for all three of our options, it’s going to show up.

For those three builds, we’re going to always want this weapon. There are also some standard things you want when you build a 4e character – an Expertise feat will help you with your chances to hit, and there are a few that buff the Execution Axe. Axe Expertise is a bit of a waste (since it only rerolls 1s, which a brutal weapon never uses), but Two-Handed Weapon Expertise makes you better at charging. These are good feats for most every character of this kind, with some corner cases.

Another thing is that while I don’t feel it’s meaningfully different to give her pointy ears and say she’s a half-elf or elf or eladrin depending on the game you’re going to play her in, Hilda definitely has a very humanlike aesthetic. The race is a free roll here – you can pick whatever gives you toys and tools you like. Tanky Hildas probably want to go for races like the Mul and Goliath, and it’s up to you to visualise how you want to treat that. 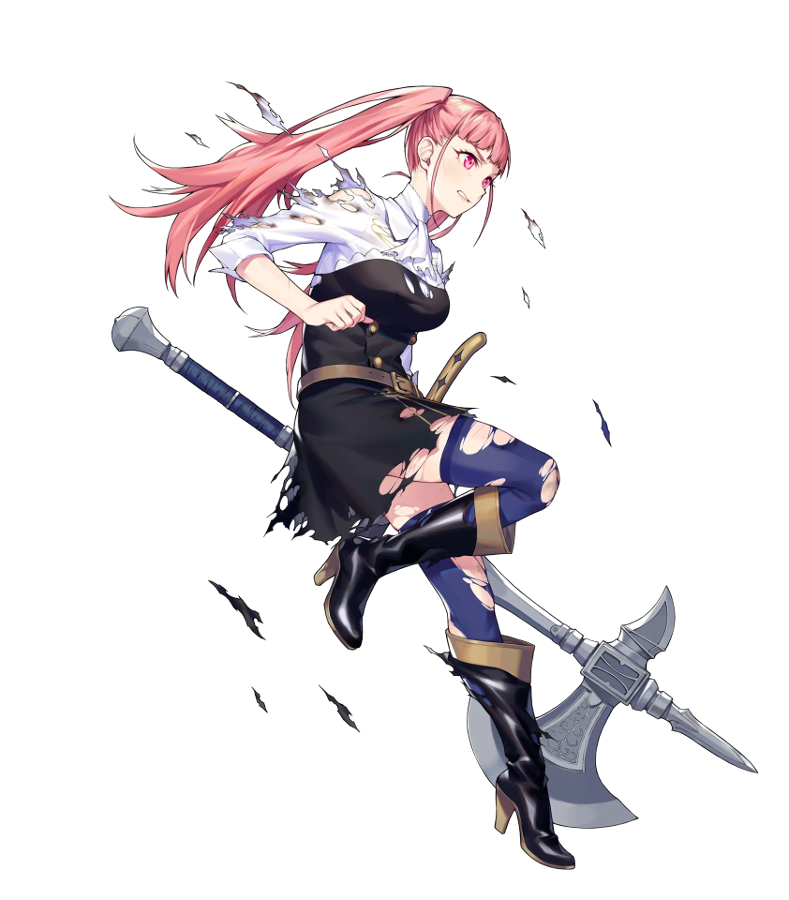 Option 1 – Blood Of the Smitey

If you’re wielding a big weapon, big hits are your best friend. Attacks that do more than one or two weapons of damage per hit are going to be great as you level up, and nobody does it better than the OG Paladin straight out of the box. Paladins have access to the absolute backbreaker attack Blood Of The Mighty, which at level 1 with stacking all your options at once, can result in one shot killing the hardest enemies at your level and above, once a day. It does damage to you (which may be a bit more of an Edelgard thing).

If you go this route, Hilda becomes someone who spends a lot of the combat taking hits, positioning herself around her allies, then picking an opponent and punching the living pickhandles out of them. The base Paladin has powers like Divine Challenge, where an enemy gets hurt for free if they don’t engage you, and you want to keep chasing them. There’s also the power of your Divine Sanction, which you can leverage against an opponent.

A Paladin build for Hilda also gives you access to the eyewatering Righteous Wrath of Tempus, a power that lets you lick your fingertip and say this is going to crit, which when combined with those above multi-weapon attacks means that Hilda can pick an enemy in the midgame and just make them explode, but only a few times. Most of her time she’s just not bothered – focusing on keeping herself healthy and taking hits.

Paladins tend to want heavy armour, so you’ll want to invest in some armour that’s very pretty. They do get to focus on Strength and Charisma, but they also want some Wisdom, which seems something you might see Hilda as lacking. Depends on how you interpret her ability to convince people to do what she needs done. Also, no matter how much you file the numbers off, Paladins are divinely empowered – they have powers that come from an outside source. That may not work for how you feel Hilda should work.

Though the idea that Hilda is the Paladin of a small god who is also super lazy is kinda fun.

In Fire Emblem 3 Houses one point the story makes is that Hilda is really good at getting people to do things she wanted done, even without telling them to do it. She’s also known for chanting at herself for her succeses – Hil-Da, Hil-Da, Hil-Da! – and for hitting things like a truck sometimes.

This pulls me towards suggesting the Warlord, which has a build traditionally known as a Lazy Build. The Warlord can be built so that they literally never have to make their own attacks, where they stand around wielding a weapon, make attacks of opportunity when opponents move past you, and otherwise the rest of your time on the battlefield is spent positioning enemies, chanting to make people healthier, and opening up opportunities for your allies to crush someone.

This Hilda still wields the big axe, and probably still wants to pick up one or two solid personal attacks. Particularly good is Brave Warriors, which is a big meaty charge (and that takes advantage of our aforementioned expertise) but also makes everyone else better at charging as well. The Warlord also gets to build for high strength and high charisma.

Also if you want a great power for feeling like everyone is falling over themselves to help out the battle baby, may I suggest Lamb to the Slaughter, where you drag an enemy into a position and then three other party members get to charge them?

Now this one is a bit off the wall by comparison, but trust me a little here. See, Hilda in the game is actually really charming and she can make a great Dancer. Ostensibly, I could suggest a Lazy Bard build and be done with it, but we spent that feat on having a huge axe and look at her, she sure knows how to handle getting bloody.

Bards have access to four different major builds; there’s a ranged weapon one, a lazy one, an implement one, and a melee one. The first three get lots and lots of support; the fourth one doesn’t get much because it was already perfect. The melee weapon bard, known as the valorous bard, generates temporary hit points (think like a health buffer) every time it hits enemies. There’s also the White Lotus feats that work well for this kind of bard; particularly, White Lotus Riposte, where you hit an enemy, and if they hit you back, you hit them back and at paragon you hit them back again.

This path relies on the bard getting up in people’s faces, and they’re tough enough to take some hits, without them necessarily being an actual armoured powerhouse themselves. You can take hits while you’re high on the fun of having just punched an enemy in the face. It’s a way of getting that capsule of Am Baby Energy, while still having a character who rocks an enormous head splitter of an axe.

The Valorous bard also gets to build for the War Chanter, a paragon path that turns enemies into fountains of hit points when they hit and even get to tell a party member, ‘hey you, hit this baddy the way I’m hitting them.’ It’s really strong!

Now that’s not to say this build is perfect. It is after all, a build that focuses on Charisma and Constitution. The idea that our Hilda can’t carry large loads seems odd to me, because her high speed and strength normally make it seem to me that the axe she hefts doesn’t actually slow her down much.

There are some other ideas I threw around for this but eventually opted against because they sort of require pushing the character in a lot of different directions. If you wanted to focus on her having a light armour and moving fast, chasing people down, there’s a lot you can do with the Avenger, especially with the ability to try and score critical hits to exploit your big honking axe. If you like the sound of optimising for ridiculous charges, there’s also builds that the Knight favours, but they eventually start to incorporate abilities like teleporting that don’t necessarily feel very Hilda. The Paladin may not quite work for you but you could build sideways and take up the Cavalier, which gets to focus on Strength and Charisma, and can even run around with a magical horse mount if you want. And finally, if the Bard sounded like it was a bit too much work, you could investigate the Skald, which is pretty similar, but more prone to making basic attacks (which with your axe, are going to be big and chunky) while making your allies spend their actions to heal.

This was fun! I hope it was interesting to read. Feedback is as always, welcome. 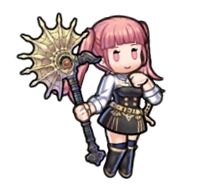