I don’t actually buy a lot of games.

Given that my job involves a lot of game literacy, that I’m constantly consuming games media on youtube and reading about it in books and articles and it’s just generally part of the media space that passes through me as I pass through it, it surprises me to track through a year and recognise just how few games I actually buy. My steam backlog for example is enormous but it’s also almost 50% complete, and that’s with my very rarely buying anything to add to it.

The fact is that the Game Pile is a sort of actual thing; for a time there, a friend of mine, who I now recognise struggled with anxiety, would buy me a game from my wishlist pretty often. If we had an argument, another game. If a sale happened, another game. My birthday? A few games. I didn’t really notice this pattern until I had a few hundred games stocked up in a library that once upon a time I hadn’t even considered something I’d keep running on my computer regularly.

What’s more, as an MMO player at various times, these purchases weren’t getting played. Some people talk about their game backlogs guiltily as if the person who they’re faulting is themselves, and I feel I should remind you that, no, in fact, that’s bullshit. You get to enjoy the experience of buying and owning the game and any time you treat the process as a sin that you have to exorcise by completing the game, you’re kind of doing the corporation’s job for you of putting control over things you bought in their hands. Buying a thing and having your interest change in it isn’t a sign you’re bad, it’s a sign that you enjoyed getting something.

In my case, however, the games I was being bought was by someone who loved me (and loves me!) very much and who was struggling with ways to show it. When I play my Game Pile games, it is in part to recognise that spirit in which the games were given, and in many cases, that’s led to me being more willing to consider a game for its best ideas rather than just lay into them for being bad.

(Not that I haven’t done that.)

Still, there are some games I bought this year explicitly looking forward to play them and I haven’t yet, not in a whole year, and that’s got me thinking as the end of the year draws up. Since the theme for this month seems to be games I didn’t actually play, let’s do a quick rundown of some stuff that I own, that is in my house and isn’t being played right now and what kind of reasons I have for that.

This is also something of a goal and a personal accountancy issue. After all, Christmas season is time to hang with family and maybe, just maybe get to play some of these boxes of cardboard I’ve bought. You might have seen me buy these, you may have seen me talk about how excited I was to play them, so consider this a followup.

I’m going to limit myself on this to stuff I purchased in the two big opening parts of the year: January’s Cancon and stuff I bought myself for my birthday. I bought Lanterns last month because it was cheap second hand, for example, and I’m not going to give myself guff for not playing that since it’s been a few weeks and I’ve played it before (just not my own copy).

I bought this game because I was at the time working on a presentation for DiGRAA about orientalism in board games and oh boy howdy did this game suggest it was going to be in that space. It was also however a big-box Days of Wonder hard euro with great production values and really pretty pieces, so I figured at least there’d be a solid enough game worth digging into there. 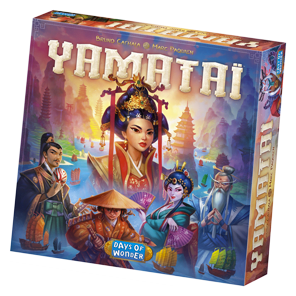 But when am I going to get a competitive hard euro to the table?

That presentation went off well in February, but I also went from having two people by my side on the project to doing it on my own (not complaining), which suddenly meant it just wasn’t as important, and that meant I just did not find the time to come in to the uni to play this.

I mean, I’m not going to feel bad if I never play it, I just would rather it be in the house of someone else who can appreciate this near-mint copy of a $60 game.

I bought this at the same time as I bought Yamatai, for the same reason. This is a game about a – for lack of a better term – oriental theme with developers with actual cultural grounding in that space. That’s really cool.

Plus, I’m a big mark for Korra, believing it to be one of the many post-Avatar franchises that I like a lot more than I liked Avatar. This game should be an absolute breeze to get onto the table, right? 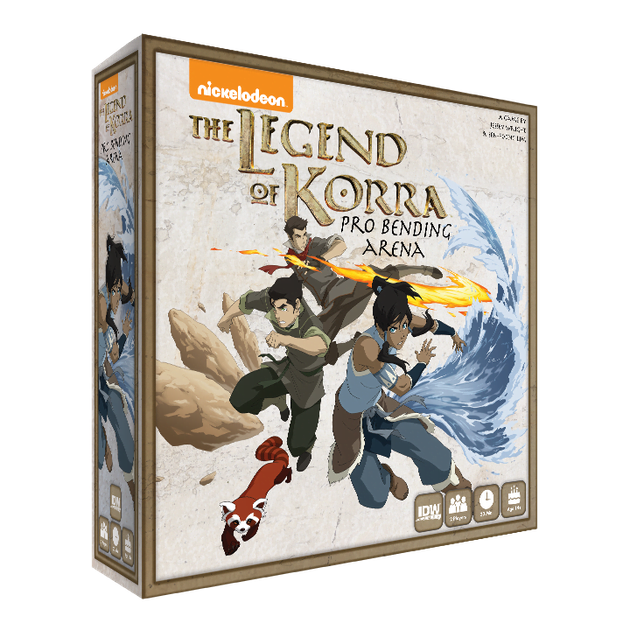 Well, again, the fallthrough on the paper meant that didn’t happen and this game is sadly a straight-up head-to-head one-versus-one sports game. My single most likely opponent for 2 player games is Fox, and we have something of a rule that it’s best not to play any head-to-head stuff outside of playtesting our games, just because neither of us handle losing all that well.

Now, sometimes I sit down at the table with other friends who are more for that kind of direct competition but that’s when I have three or more friends around and suddenly a 1v1 game means a bunch of people sit out. That’s a bummer.

This is a game I got for Christmas last year, and I was so excited to get it. It’s a game I already knew I wanted, because it was basically a second edition version of a game I already liked called Star Realms. That game had a fast deckbuilding experience but lacked in individualisation in the base game, where both players started as tabula rasa and the resulting game that followed was all based on who picked what.

Hero Realms instead gave you character classes so your starting decks were different and you’d look at purchaseable cards differently. That’s great, I like that. And I was wonderfully gifted an amazing game that I know I like (I’ve goldfished it) and even gotten to play once, and then… nothing. 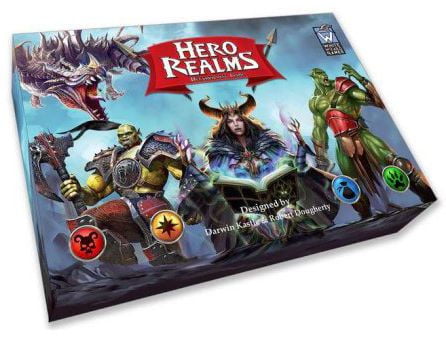 That’s because Hero Realms is again, a head-to-head builder. Fox and I don’t play a lot of games in competition with one another, like I said. But, I knew, there was a co-op expansion for Hero Realms, which meant we could sit down and play this game together.

Which I haven’t yet played, and I don’t quite know why. I’ve definitely had the urge, and it even handles larger groups? But the stars haven’t aligned yet for me to sit down with some friends and make decks as we fight an evil sorcerer trying to animate an undead dragon.

It’s a bummer. I’m hoping that my niblings will be able to handle this game soon because hey, it’s fully cooperative and that means we can help each other, but who knows how that’s going to go. I mean it’s a deck builder, I’m asking kids to shuffle a lot of cards.

This game, ostensibly, was my birthday present from my parents, who gave me about the right amount of money that I then turned into a card game I knew I was really excited to play. Bloodborne has kind of haunted my 2019, a game that I couldn’t finish, informed one of my major creative projects in Hunter’s Dream and yes, sits on my shelf, wondering just why I haven’t gotten around to playing it. 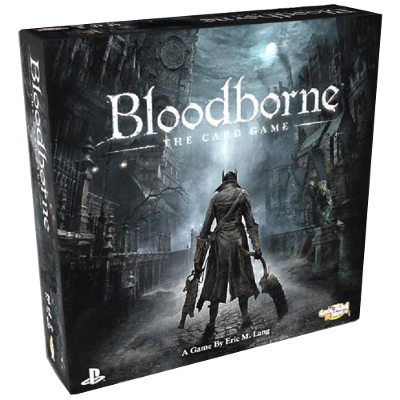 It’s a co-op game! It’s about fighting monsters! It looks really cool! What’s stopping this one from getting to the table?

Yeah, the minimum player count is three. I don’t tend to have three players. I usually have four (in which case we’re playing D&D) or I have two (me and Fox). And while Fox and I playing Bloodborne would be absolutely great fun, we are still ultimately two people, not three.

It’s a minor logistical thing, but it does mean I have to plan for who I’m going to play this game with.

Before There Were Stars

This is a game that got bought on its pure aesthetics. Fox liked how it looked and she grabbed it. This game is in that rare category of creative storytelling games that wants to be self-contained. Rather than a number of free improv games, though, this one builds itself around a number of really beautiful props made to set the tone of the game. 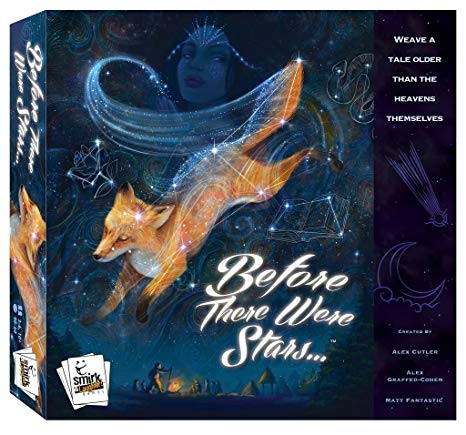 It’s not gotten to the table because… well, our main people who might want to play a storytelling game about mythologies are a little young to grapple with the idea of improvising a story on the spot with the idea of symbolism in cards.

This one I don’t feel too bad about being on the backfoot. It’s not my normal kind of game but I really want to play it with people who might want to enjoy sitting around in a circle telling stories, but not a story they already had in mind, nor a story that’s about getting a laugh.

It’s a little mystical, and I do love game experiences that take me to places I rarely go on my own.

I did an unboxing thread for this, so you may remember it. The basic idea is that this – well okay no the basic idea is you’re all nature druids trying to heal the land and build powerful connections to sites of sacred importance, but the way you do that is by getting points and prizes. It is a game where the cards are made up of transparent plastic with a few things on them, in sleeves, and when you buy powers, you add them to one of your cards, meaning that your deck never gets bigger but the cards in it still change over time to match your changing position in the game. Technologically speaking it’s a deck builder that never changes the size of your deck and it has all sorts of other cute mechanics, like a catch-up mechanic for the player who can’t buy anything. 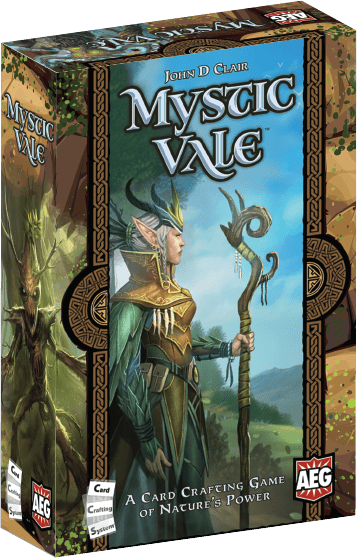 Never got it to the table.

I don’t know why. It might just be that it’s the kind of crunchy builder game that currently only appeals to me. I know I love deck builders a lot, and my go-to builder game at the moment for new players is my beloved copy of Century: Golem, meaning that the more ornate, more complicated Mystic Vale has to wait.

It’s a beautiful game, I even got a replacement card from AEG when I pointed out there was a slight mangling of one, and I really do like what this game promises, but right now? I just can’t find anyone to play it with in my friend circle. It’s always going to be competing with other games, which makes me a bit sad.

That means it joins the other games in this part of the list where I’m going to make a concentrated effort to play them with other people going forwards. Trying to prioritise these suckers!