First up, a link! This is a bit of a different Story Pile than normal, because the work in question is available free on the web. Normally, I break up my writing on a series or movie with screencaps, which I happily do under the idea of fair use (for commentary purpose). In this case, though it feels a little more close to the wire; that work is Patreon sponsored, after all, and it’s – it’s just there. It’s there, you can go read it, it’s free.

I could just approach Fawnduu to ask her permission to use her pictures for this blog review, but that would necessarily draw her attention to it, which is bad, and brings with it the hypothetical conception that she should care about what I have to say about her comic, which is also bad.

With that in mind, I’m not going to use pictures from the work to break up this review, beyond this one isolated screencap of Danni’s doofy dragon grin. This work is extremely low stakes (so far?) and therefore I might spoil some stuff in order to talk about it, but don’t worry. This isn’t a series about dramatic twists, so far.

This is a series about lesbians, and dragons, and lesbian dragons.

My Dragon Girlfriend is a webcomic by someone I only know as Fawnduu, who I know entirely as the maker of this webcomic, and apparently is friends with some very cool people on Twitter. The plot follows the adventures of Danni and Christy, a pair of girls who meet one night when Christy was having an awful date, and Danni intervened.

Turning into a dragon is involved.

From there, Christy learns about cryptid life and the many different things that having a dragon girlfriend can give you. She meets other cryptids, goes on dates with Danni, and meets her friend, as all told through the medium of extremely low stakes, extremely positive queer relationships. Friends are met in terms of their relationships, and most people are introduced to react to or provide background texture to this relationship. This is a story that really is about its central couple, and their central coupling.

It’s also a work that’s decidedly more racy than the stuff I normally talk about anywhere public. That’s not to say this comic is porny, but you’re going to see some boobs if you read it, even if they’re that particular variety of nipple-free boob that I normally associate more with kids’ media and comedy than I do with grown adults smooching.

The series is pretty short as of this writing – under two hundred four-panel pages, which puts it at the same overall volume as (for example) two typical issues of a western comic. It’s a mid-afternoon snack of a read, and it’s not going to stress you out if you have to interrupt the reading. Most of the tension in the story comes from whether or not characters can get to a date or remember to take a note or the same.

That’s something about this series that I think is worth recognising, if you want to make media of this ilk: Its inverted structure.

The most conventional form of long-form smooch media, and one of the most popular is the soap. Soap opera, soap drama, daytime soaps, whatever you want to call them, a soap is a story with a deliberately long-form narrative, mostly focused on people and their emotions. They’re sometimes quite ridiculous, and they often have low production values, but that’s not important for now. What’s most common in the story of the soap is the way the stories are structured.

The defining story moment of the Soap is constant cliffhangers. Every story wants to introduce a new spike in tension, a new reason for you to tune in next time. It can’t really raise the stakes per se because the stakes are generally around the same level, but it means that your typical soap plot goes through an arc of tension, in any given episode like this: 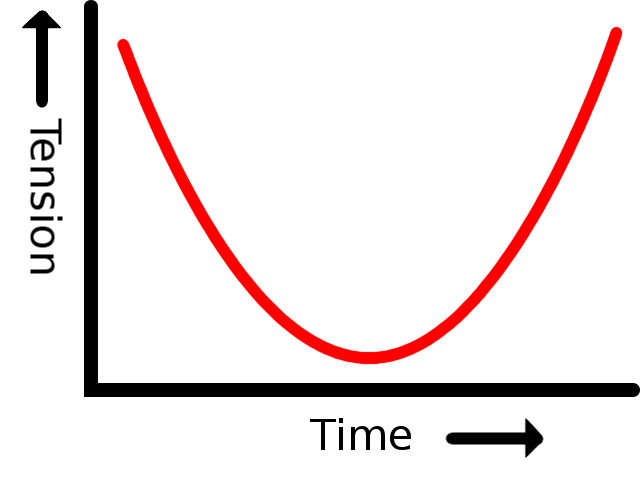 Each episode picks up where the last episode left off (a cliffhanger), and durdles around for a bit, reducing the tension by some means (a distraction, a delay, or a dismissal, usually), only to, right at the end, send the tension right up through the roof again because it wants you to tune in next time.

This is also a model that serial comics often use. When a comic isn’t about delivering a punchy joke each issue, they’ll usually work by this same model of repeated, tune in tomorrow cycling. Some comics like Sluggy Freelance kept this model going for literally years.

Dragon Girlfriend doesn’t do that. 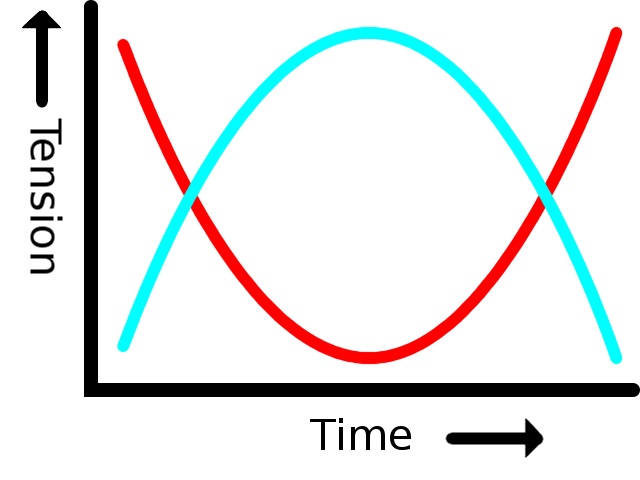 Instead, most comics are about introducing and resolving the same source of tension within that comic. I’ve been told that Fanwduu has a background in storyboarding animation, and I think that shows here – comics are not being treated as excerpts of a bigger work, nor are they being treated as hooks to keep you going; rather, each one is trying to be a self-contained moment. Even the longer plots tend to resolve themselves quickly.

Like, the central tension of most smooch stories tends to be hey, how will these characters wind up together. In Dragon Girlfriend that’s pretty much sorted by panel twelve. This isn’t a story that wants to spend its time getting to the smooches, it wants to be about making you happy with the smooch time that ensues. It is a story about the point most stories go well now what?

There’s not a lot of media like that. And this one is free, and it’s got lesbians in it, and really

that could be all you need to have fun reading it.

Check it out, it might be your favourite new thing, and if it’s not, it doesn’t matter, because you didn’t have to give up anything to experience it.

That said, there is one kind-of-content warning. If you’re a guy of any variety, and if you feel uncomfortable in lesbian spaces or reading lesbian media, there isn’t really anything here for you. It isn’t a urban fantasy variety show with adventure and drama. This is a story about lesbians who know lesbians who lesbian lesbianly, with lots of lesbian-specific story moments and experiences. You might still like it, by all means give it a shot! There’s nothing wrong with liking lesbian media, after all! Just it is very much that.