Now, look, odds are good listening to this music – if you have been – you may have found you like a few Jimmy songs. You might think that one or two of them are good, maybe the best songs on an album are worth sitting through. That’s fine. I don’t know why I respond to these songs the way I do. If you listen to this album and think ‘eh,’ that’s fine, but you should know that I play a game with this album with people where you take an album and ask how many songs you have to remove before the album’s not worth picking up.

On this ten song album, I think that you have to ditch nine of the songs for me to think it’s not worth getting, and the tenth song that remains is literally his most successful song. 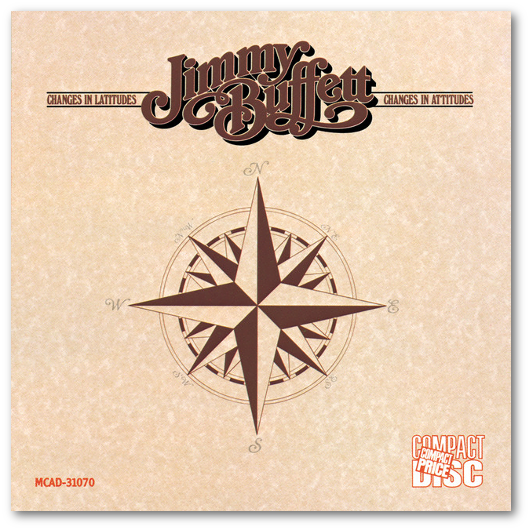 This is the album that catapulted Jimmy briefly into the position of being an FM radio indie kinda guy that had fans but no presence to being what some people would later refer to as a one hit wonder in the country scene. And it’s kind of understandable – Margaritaville is an absolutely titanic hit compared to his normal songs. The song had cross-board appeal, getting to #8 on Billboard, and #13 on Country, which while not unheard of was certainly impressive. This song is not just a classic of the genre but it’s one that kind of became a cultural touchstone for people who went on to become country stars themselves – lots of people reference Margaritaville either by name or by using key phrases, and it’s a song that’s been covered a lot.

There are a few ‘canon’ versions of Margaritaville too, a radio play that’s slightly faster and structured differently, live versions that add different specific references, a kids version Jimmy recorded so his kid could sing along (she’s forty now, mind you). It’s also parodied a lot, with the most well known probably being ‘Marijuanaville,’ a song that is about as clever or subtle as you may think based on the name.

The song’s remarkable to the Jimmy Buffett fandom in that the song is actually a really sad, miserable reflection on how this guy is sad over a breakup and is just drinking himself unconscious repeatedly, whiling away empty days, and at the very end of the song, comes face to face with the fact his situation is his to own and he’s why it sucks. It is sung upbeat and happy and people sing along with it at concerts, and it gives the name to Jimmy’s restaurant chain, suggesting that he’s advertising a great place to go when you’ve destroyed your relationship and end the night being mopped into a bucket.

I don’t know if this is the Jimmy Buffett hipster equivalent of complaining about overplay, but Margaritaville is to my mind the worst song on this whole album!

This album definitely has more of your 1970s Gulf-And-Western style; songs about being in Mexico or coastal towns, songs about reflection in these spaces where nothing is making demands of you. Where Margaritaville is about a dude wasting his life, Biloxi is a haunting, sunsoaked meditation on a beautiful place, of innocent actions, of the swelling feeling of being in a place that does not hurt. Where Margaritaville is the gentle easygoing rhythm of getting hammered on endless sunsoaked afternoons that don’t matter, Lovely Cruise sings about that with an actual admission of joy, not sadness.

Then there’s In the Shelter, which is already excellent and I kinda covered already, and Landfall.

Now, look, Landfall is a stompy, piano-and-harmonica dance-hall country song that wants to be shouted as much as it wants to be song. It’s got some weird, time-lost joke references (Lucille Ball? Really? Okay, Jimmy), but what sticks with me, the phrase that I realise has been informing my mind for a long time, is where he talks about how being cooped up in a truck doesn’t bother him, being in confined spaces doesn’t bother him, but having to deal with people for prolonged periods bothers him. Running away to the ocean and ignoring people isn’t by any means a thing that scares him, it’s release.

I love this album. I’m not sure it’s ‘the best’ Jimmy Album – I put lots of value on West Nashville Grand Ballroom Gown, and Landfall doesn’t have the same potency.

And Margaritaville isn’t that good.