This isn’t because it’s a bad ship or nothing. It’s —

You know what, let’s be really quick here for the normals that might wind up reading this. Shipping, which started with the Starsky and Hutch fandom in the 1970s, is the idea of members of a fandom pairing two characters together in a (usually sexual) relationship. This usually, but not always, serves as the basis for some kind of creative media outside the series or book or story that explore or express that.

So you know, if you watch say, Power Rangers and hope that the pink ranger winds up with the blue ranger instead of with the green ranger (and ho boy do I have some news for you on that front) you are, in that time, ‘shipping’ those characters in your mind. If you want to talk about that pairing, you’d refer to that pairing as a ship; ‘the pink ranger/blue ranger ship.’

This is pretty normal and you’ll find lots of people do this even if they don’t necessarily think of it as an activity with a name. You could look at the long-term predictions about relationships people made about Game of Thrones as a sort of massive mainstream shipping incident. 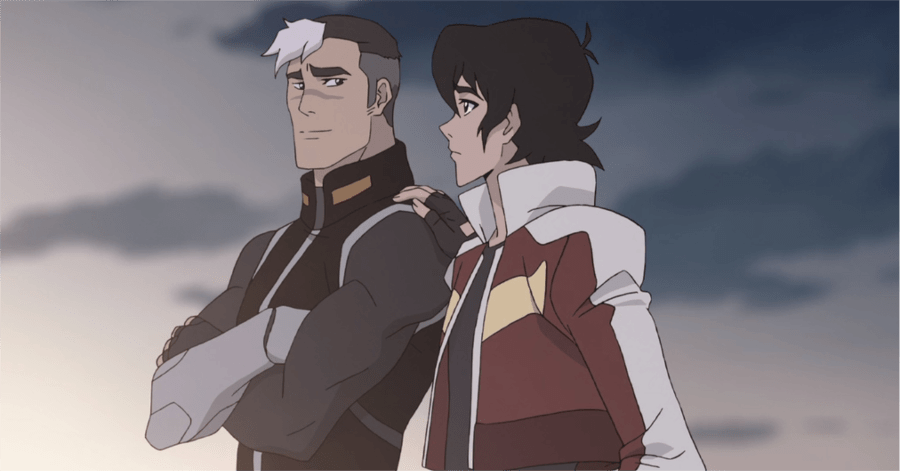 Shipping tends to be, but is not always, pretty queer. There are a lot of theories and explanations as to why, but for now, just accept that in general, shipping works tend to be a lot more likely to include some variety of queerness in their canon, whether it be in a pairing or a gender.

In this case, ‘Sheith’ refers to imagining a relationship (shipping) between Keith and Shiro, from Voltron: Legendary Defenders. This was a popular idea amongst fans, and some fans have concocted some pretty weird conspiracy theories about how it was ‘really’ what was ‘meant’ to happen. I think that’s goofy, but it’s not that important to this conversation.

— pretty funny how, when we talk about shipping, we do so with the implication that these matters of taste have to be wrought into issues of right and wrong.

What’s more, these rageful arguments about what is or isn’t a good ship often replicate familiar structures, where marginalised people often feel more social impact from disagreeing with convention. Not to say there aren’t queer people being huge jerks about Sheith, just that I’m probably going to receive very little pushback over this opinion whereas the same idea expressed pretty much with the same level of sympathy or nuance could get a woman on tumblr yelled at pretty hard.


Then there’s this really extra-weird thing where fans of ships try to justify their ship on like, things that aren’t or can’t be in the medium in question, or don’t actually matter to the text? Like some people think that there are ‘missing’ lines or ‘ad-libbed’ lines that change the meaning of some characters’ relationships to one another, ideas about rogue animators or lies in convention interviews. Now, I think that stuff can be interesting when you look at the process of media being made, that’s cool, but it doesn’t change the story we have, the text that came out. 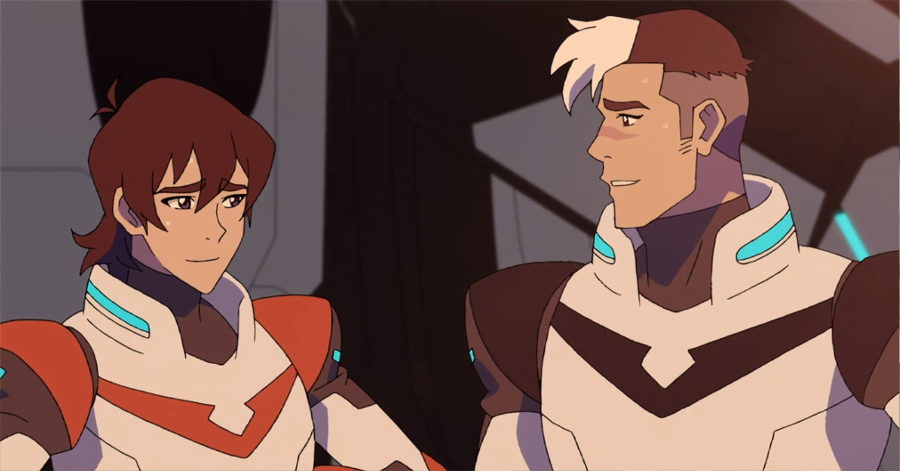 Anyway, the point is that Sheith, as a ship, doesn’t really do much for me, personally. I’ve already written about the way that the characters in Voltron are kind of half-empty vessels, and that means for anyone else who wants to interpret the characters differently to me, I don’t exactly see any reason to fight over what does or doesn’t work for others. I don’t like Hunk, for example, but if you do, that’s cool! I think Pidge is great, but you may really resent her, and that’s okay too!

The detail that works for me the best to explain how I see these characters is the flashback in Season 7, Episode 1. In this, we see Keith and Shiro, before Keith joined the academy, and Shiro as an accomplished pilot being sent out to recruit for the Garrison. Prior to this point I didn’t really have a strong opinion either way on Shiro and Keith as a couple, because most of what people seemed to think of as ‘romantic’ I saw as ‘being friends’ —

— and it wasn’t until this episode that I really clicked the way I saw their relationship. Specifically, in this episode, Shiro, who is Graduated, and Out Of School, is there to promote Garrison recruitment. This class largely act like, well, little kids, and they’re excited and excitable and they’re kinda eager. They’re also pretty short, but whatever. Shiro here also looks a lot like he does in the later episodes – his hair hasn’t gone white yet, but otherwise he’s mostly the same way as he is the rest of the time. That kinda makes me think he’s ‘adult,’ that he’s fully grown. Keith by the same standard is short, and depicted as very young.


Now you might be thinking I’m about to veer into some kind of argument about how the two characters being interested in one another despite this age gap is, like, grooming or pedophilia and to that I must say, please calm down, and also, stop. I’m talking about ways to regard characters in a fictional work here. 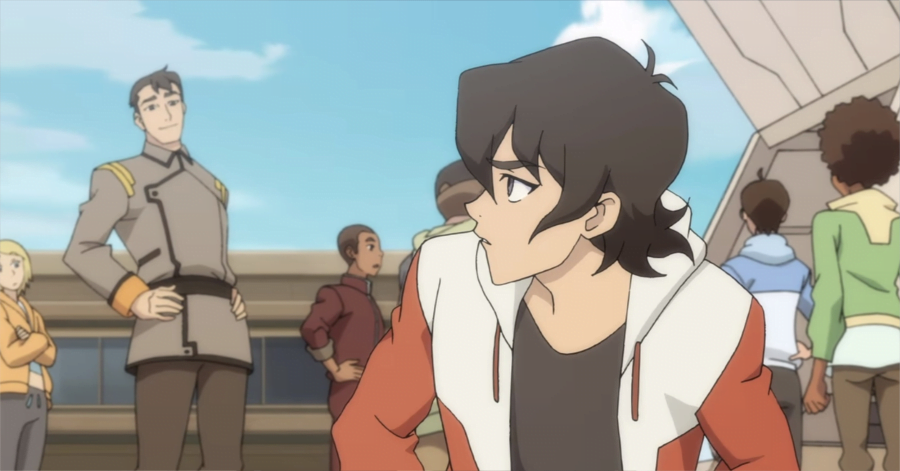 I haven’t given hard numbers here – it’s sometimes suggested the age gap is 18 to 25, but that’s not by any kind of source you ‘have’ to respect. This isn’t about the age gap as being creepy, it’s about the way these characters perceive one another.

Shiro was an adult, and Keith kinda not, then Shiro oversaw his development and helped him grow up and gave him advice along the way. I know some people I met when I was in my twenties and they were in that age range and it’s become very hard to regard them as adults at all even though they’re definitely adults now. I still see them in terms of the way they were when they were still before that threshold. I —

This episode, by the way, also included a side story about the rest of the pilots being shrunk down into tiny little smurf-sized heroes that then have to have a Honey-I-Shrunk-The-Kids adventure on an alien planet, because this show rules so hard.

— don’t feel like Keith needs a boyfriend, in the story we saw. Keith’s birth father died when he was very young, running into a burning building, so Keith’s dad was basically a fire fighter, one of the few civic servants that get pretty unquestioning positive respect these days. Having a dad that went missing because he was too tremendous is pretty rough on a kid. Shiro is an astronaut, a record holding astronaut, which is kinda one of the same classicaly macho archetypes of a particular window of time. If they had a cowboy in the series to go for, Keith would have had the whole set.

I said a while back that “Shiro isn’t Keith’s boyfriend, he’s Keith’s gay dad,” and I do stand by it. To me, the dynamic feels better if Shiro and Keith are still close, they still love each other, they’re still each other’s emotional support, without it necessarily being a sexual or romantic relationship. Notice that word – feel! I’m not trying to prove this to you, I’m just explaining what I like about it. And I do like these two having a very intense relationship, just not the sexual or romantic one that typically gets brought up as a ship.

That’s what I like! I like the idea of Shiro as a Team Dad and Keith is the Eldest Son who takes it seriously and understands what that means to the group. The frustrating thing for me is that while I would love for Keith to have a boyfriend (or girlfriend, or I mean, ideally both), I don’t like Keith with any of the pilots his own age in the group, which leads to having to imagine elaborate dating scenarios which get better when you imagine Keith is covertly bringing these people he’s kinda interested in for a pass by his Gay Dad who may not be THAT aware that Keith is doing this. I like that! That’s some good old fashioned romantic antics that don’t break up the flow of rad space combat and robot lions!

Doesn’t mean you have to agree, though.

Y’know, this is mostly reminding me just how cool Voltron is. Isn’t it neat that there’s so many different parts of this story? Different ways to see the same characters, different ways to create? And this whole story ended with Voltron literally saving the fanfiction universe, so every different take has a place where it’s true. That’s really cool.

Still not a fan of Sheith. But I don’t mind if you like it, and I hope it makes you happy.

I promised myself I’d write this  even though this is just one of a number of articles I eventually scrapped because I thought the title ‘shipping manifest’ would make a funny segment for the blog.