Up front: I’m not going to talk about Love Live or its actual stories. Sorry. I tried. I really did. But I kept getting caught up on what I can’t help but think of as Love Live’s Boypocalypse.

This one’s not going to be a happy chat about lesbians.

There’s this kind of media that’s really popular amongst queer spaces which is kind of queer because it’s full of girls who mostly have relationships and friendships with other girls, and there’s no overt sign of heterosexuality in the same space. And it does this by avoiding having any boys. Or showing any boys. Or implying boys even exist in the whole dang universe.

Now, for me, I see a lineage in this kind of media from the 90s harem anime; where there would be anime about one pointlessly tedious schlub of a human male, usually a dude who had some completely forgettable, tedious skill that made him nonetheless important to the group and then you’d get to see those girls all interacting with the boy (who’s just like you). It’s not a complex issue of appeal, and it wasn’t even like it was subtle. Venerable aged child of the harem genre, Love Hina, went so far as to make the subtext (these are girls you can get with) into text by the author marrying a woman who looked like one of the major love interests and dressing up as the main characters at his wedding.

But that, that’s old tech. That includes a boy. That boy is occupying a slot in the story space that could be being given to another girl! A hot girl! And girls flirting with girls, especially in a deniable, not-actually-saying-it way, that appeals to boy audiences just as much (and coincidentally gets the allure of lesbians, which I don’t imagine was a particularly important consideration).

Note that the inverse happens all the time; there are plenty of stories about nothing but men, and those men don’t even have to have sexual chemistry or flirting! Remember that the overall media landscape we have is patriarchal, where men can have complex and engaging emotional relationships (especially those that reinforce patriarchy and the importance of men). A world of women isn’t the same thing as a world of men, especially when talking about work made by and for men. 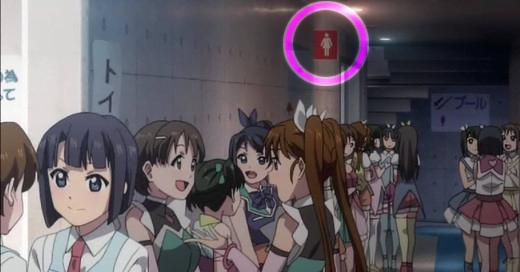 And what’s more, my personal space being so overwhelmed with women meant that it was kinda easy for me to mistakenly believe that these things were super queer and therefore it was worth looking into them for queerness in media month… and the result was finding a lot of games and media were kinda disappointing.

I junked a lot of media I was kind of excited or interesting to talk about just because a lot of it failed my basic test of ‘are a gay couple in it and are they okay and matter.’  Now one of the worst offenders for this is Love Live. It’s a rhythm game and anime and idol franchise and it’s got all the things that attach to that to make Big Piles of Money. I did some research into it to look into if it’d be a good thing to talk about this month, and I mean no disrespect to the many extremely gay women I know who like it, but man.

Okay, finally, yes, this is now about Love Live.

Love Live has this really weird kind of caution about even acknowledging that men exist. For a series with such a vast amount of everything, there’s a stunningly small number of appearance of men, or even mentioning them. The above screenshot from an episode is a almost perfect replication of a real location in the real world, and the highlighted toilet sign should have another toilet sign next to it showing a typical men’s toilet sign.

Now the thing is, Love Live isn’t a universe that actually lacks men. Some characters mention male parents, and if you check out the Love Live Wiki there is a dozen or so pictures of men in group shots, background to major scenes, or mentioned by characters. Men exist, but the show doesn’t want to remind you they’re there.

I wondered why. And maybe it’s because the creators of this series are all enlightened super-beings of Yuri Purity. Maybe that’s it. But it seems to an extent there’s a degree of a relationship with the Japanese fandom of Love Live which can be politely called ‘lively’ and can more bluntly be called ‘terrifyingly toxic.’ Love Live fandom is seen as a red flag on dating websites. Stores sequester Love Live merchandise to make sure the fans don’t have reason to interact with the rest of their customers. The official Love Live websites includes warnings about the behaviour of fans and when a movie launched, the makers pleaded with the fans to not be weird to the voice actresses. When Granblue held a crossover event where Love Live characters could talk to boys in Granblue, a fan sent credible actionable threats to the makers of the show about defiling their product.

And that makes me look at these boypocalypse settings again. These works where there’s no boys, just girl upon marketable girl.

I’ve said that I don’t like settings where I feel like there’s nothing for me, or where people like me don’t belong. Love Live and stuff like it doesn’t make me feel quite the same way.

Instead, Love Live seems like a game made for someone like me to ogle. And not just me, but the most ridiculously fragile version of me.

And that feels gross.