In February 2006, Magic: The Gathering released the set Guildpact, and with it the first four-colour magic cards that had ever been printed. With no prior precedent to work from, these four cards were exciting and they had the intriuging and hitherto unused title Nephilim. They were the Yore-Tiller Nephilim, Glint-Eye Nephilim, Dune-Brood Nephilim, Ink-Treader Nephilim, and Witch-Maw Nephilim.

Nephilim are a reference to a sort of – you know, I’m going to pull the bandaid off and just say that Nephilim are one of those pre-Bible Bible stories that gets trotted out and recycled by various people building RPG Sourcebooks ore Religious texts (but I repeat myself). There’s a chance your actual religion actually respects them as actual things that actually exist, but that’s sure not what they’re being used for these days.

Also, if you read the lore you’d know that these Nephilim aren’t the real Nephilim, they’re just magically crafted Nephilimmy things, and they’re sort of pre-god gods of Ravnica, creatures that are so transcendentally powerful and important, that they don’t even need worshippers or sacrifices – their cult calls upon them to be seen not because of their actions, but because of their existence being so fundamentally powerful and dangerous that their presence humbles people. 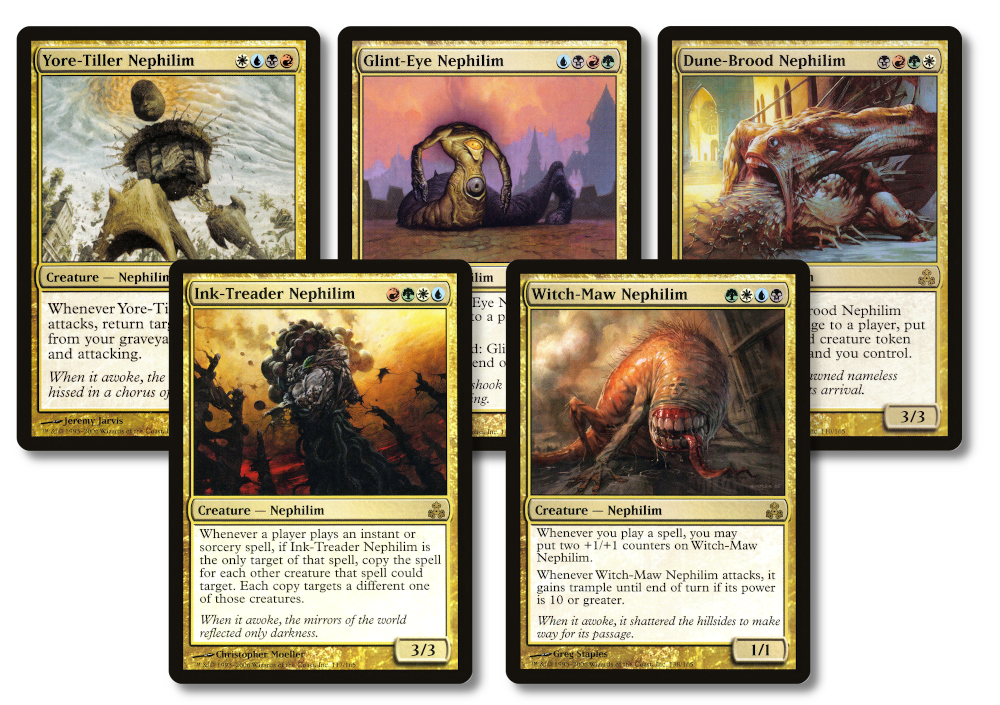 I was one of the few people pushing for these cards in standard when they were playing – I’ve been told that my Witchetty GWUB article that made a deck for the Witch-Maw Nephilim as a sort of weak FNM-Fun style Gro Deck had over a hundred thousand hits, a number that to this day, blows my mind and, ironically, helps to keep me humble about everything I’ve done since. Don’t go looking for it, I probably say ‘r*tarded’ like it’s funny.

Anyway, these are the giants that stride the old bones of a world before gods, which explains why of them, three of them die on the spot to Shock, and all of them die to Ravnica Limited Common Removal Spell, Last Gasp (and casuals, Last Gasp is really good). These dreadful monsters who made the world shake by their presence are tiny, weak, expensive, inconvenient to cast and extremely bad.

Okay, so a bad cycle of cards got made, no big deal. That can happen. But now, we have the turbonerds over in Mark Rosewater’s Inbox demanding – demanding! – That Wizards errata these cards to be legendary so that they can use them as Commanders.

First things first, if you want to play Nephilim as your commander, talk to your group about it. Any reasonable group will look at these very weak cards and probably say ‘sure, why not?’ For any given four colour combination, there’s a more broken version of these cards – even stuff like Thrasios, Triton Hero and Bruse Tarl, Boorish Herder. A reasonable playgroup should be able to recognise this, and Commander is at its root a casual format designed to let people play with cards they find fun. Talk to people. Just-

The thing that bothers me is that these cards are stunningly weak, even by the standards of the day. In the period these cards were made, a 3/3 for 4 was not unreasonable to get for a mana cost like 2CD, and if one of those colours was green, you could probably even get a 4/4. There isn’t really any reason for these cards to be so weak just on the base of their body. Nowadays we get all that and a box of candy, so I understand them looking weak now, but even at the time, they were all outmuscled by a Burning-Tree Shaman and trade with a Watchwolf – not an impressive start, especially in a time when almost every colour combination had a two drop with 3 power that could stand in the path of your awful Nephilimything.

I figured then the solution is to make my own. 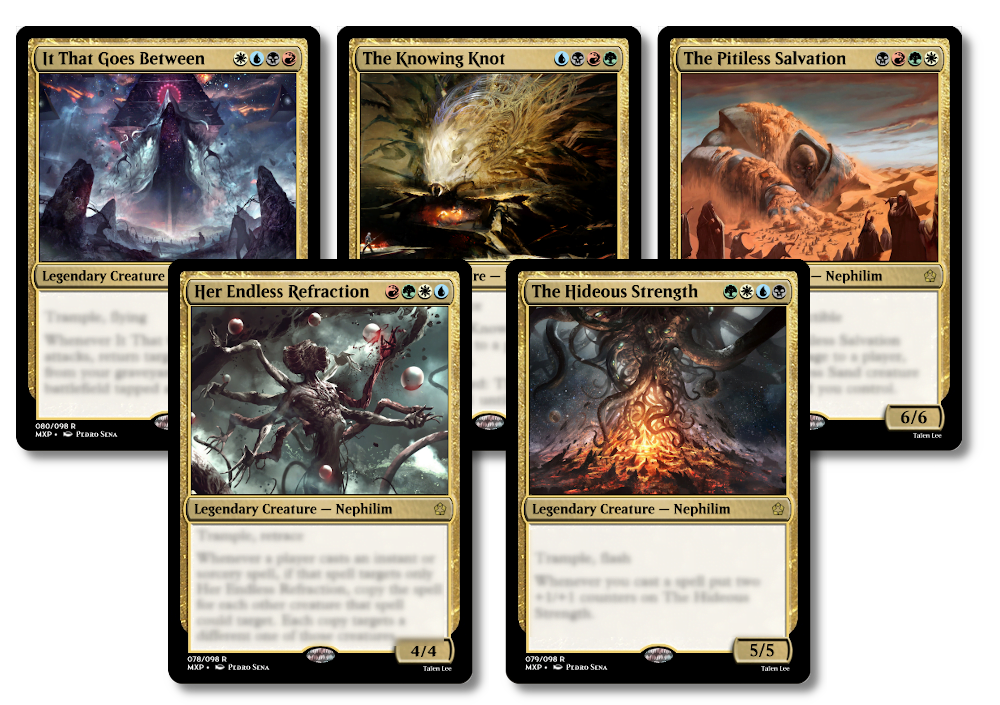 I find myself more interested in the question of what to do with the Nephilim. How to make something that merits the title, the cost, and the tone of these dreadful, strange, misshapen gods before gods. They’re not Eldrazi – they’re something more primal than that, something that has some connection to reality, something that connects to colour (though if later on Wizards decides to declare back-filling that, I called it). Also, Eldrazi are kind of boring and lack in meaningful personality, while the Nephilim are meant to be things that scare you by being materially real.

Now, something else I want to throw in is just some general combat abilities to help with reinforcing a colour pie factor. I personally feel that when cycles have linked keywords, it creates an interesting expression of interrelationship.

Now, there are a bunch of ways to do that. A simple one is to give each colour a keyword, say:

Then pile them together into a big pile pile; so that a WUBR creature gets Vigilance, Flying, Deathtouch and Haste. Easy. This has problems, though – flying and reach are basically redunant, for example. Deathtouch is pretty weak too, by comparison to the others.  What’s more when you give a card four keywords, it can create a keyword soup space – which doesn’t look nice for formatting.

Yeah, sure (and don’t use that list). It’s a bad list that I belted out for demonstration purposes. Also it might look a little less clear which colour brings things to bear, which can be tricky.

We do have the added wrinkle on this that one of the existing Nephilim has a keyword: Trample. Oh, sure, Witch-Maw Nephilim has trample kinda, but what if we make that a given? Should all the green ones have trample? That means all of them but one get trample. That doesn’t feel like an exception per se.

What if we go Green-and-a-pair in the Witch-Maw colours? White and Black aren’t big trample colours – but strangely, blue does get trample on a number of its big dumb idiots. White does get a little bit of trample, too – but almost never gets it on its own, with multicolour cards like Kenrith and Firehoof Cavalry occupying the word in white.

The point is, we need some combination that give Witch-Maw Nephilim trample. The colour that gets Trample the most is green, then red secondary, then black, then blue. And with all that thinking, realising I can’t line these things up well…

You know what would work well? Simply?

What if they all had trample?

Trample is a keyword that shows up in every colour, after all, every creature can have it when it’s big. It’s not pushing or breaking the colour pie because every creature that isn’t green is red. Then we can look at what remains and how much space we have; after all, while ‘not-green’ is definitely a flying colour set, is there anything so clear for ‘not-red’? Hard to say.

In the end I settled for Trample-And for everyone rather than the complex web, because when I came down to it, every one of these creatures should be a 4/4 or bigger in my mind, because they’re all meant to be dragon-scale threats, and so that’s our base body. With that in mind, let’s look at how all those parts fit together: 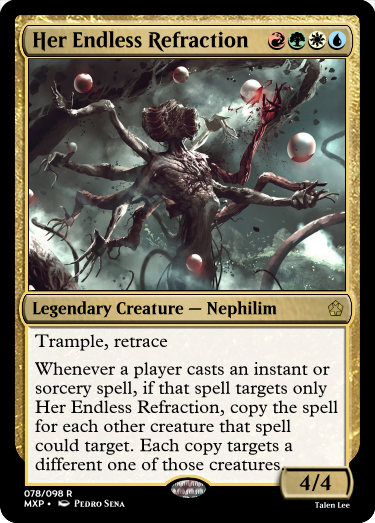 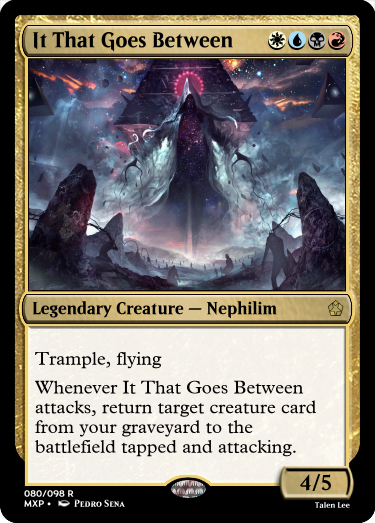 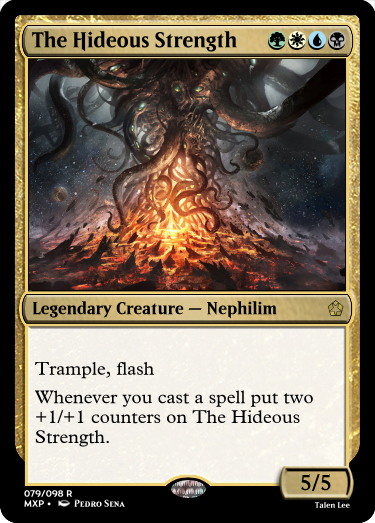 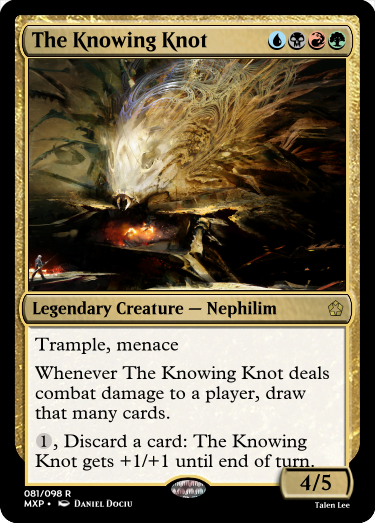 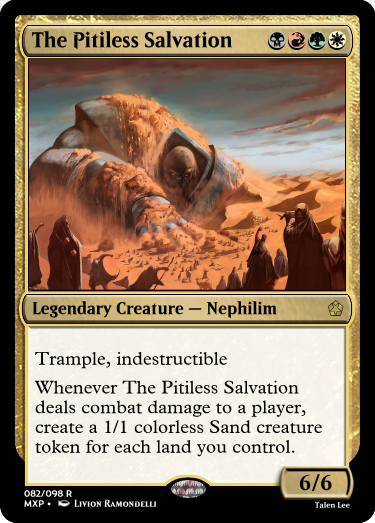 That hits Nephilim colours, Nephilim creature type, and the core mechanics of each nephilim, now presented on a creature you can build a deck around. They’re not designed to necessarily project pure lore per se, but to give an idea, a framing, that maybe a good or talented flavour text writer could impose. The idea is that these Nephilim are things that are somehow constructed or drawn into existence by old civilisations, and in the process, ruin something.

I imagine that these things were one part created and one part discovered – that they represent strange, misshapen visions of godhood, perfect and pure and extremely hard to deal with, and the result was something twisted and broken and strange.

Anyway, have a go, see if they’re interesting to you!