I time to time do flag threads on twitter, which are great for the format of twitter, which is fantastic for the framing of ‘here is a picture, now I will be mean to that picture, and as you scroll, I will do it again.’ Blog posts about flags tend to be a bit more laborious, because I feel the need to provide contextual explanation, which, you know, that’s not a bad thing, but it does change the tone.

If you’ve paid attention to me talk about flags, yeah, a bunch of this is going to sound familiar, but I feel the need to make a primer.

When you start to talk about a problem in a group, it’s very easy to start making concessions for that group. In the context of the US State Flags, there are fifty of these suckers, and fifty of anything means it’s just naturally, intuitively easy to think ‘oh hey, surely this isn’t better or worse than that.’ The problem that arises is that when it comes to flag design principles, there are three very simple rules that you can follow.

And for Americans, we can add a new extra rule:

Now, is South Carolina’s floppy mop better than Washington’s woodcut? yeah, probably, but it’s still a fine detailed flag. Having fewer mistakes than the other doesn’t mean it doesn’t have mistakes. And these mistakes are the kind of mistakes that simply gets a design a failure. Go back, start again.

A lot of these flags weren’t designed with these things in mind – in fact if you dig into the history of a lot of them they weren’t designed by people who make flags at all, mostly being the result of state lawmakers who wanted to try and leave a mark on the state, or graduate some existing element of the state’s iconography into the big leagues. Very few of them have been seriously reviewed and a number of them are influenced more by Chamber of Commerce members in the state than anything else, which if you don’t know them, they’re kind of like social clubs for local corporations. Not great.

If you take this list of sins, and remove every single flag that breaks one of the rules, this is what you get:

Out of 50 state flags, there are seven that don’t break one of those major rules, by featuring either confederate imagery, text, fine detail or a too-deep colour palette.

This is a problem that gets worse. When I did my flag thread by city flags in America, I had to invent a new category for flags that weren’t just bad because they broke one of those rules, but because in addition to the rule breaking, they broke those rules to create something awful. There were a whole category of flags in the US like Belen’s old flag: 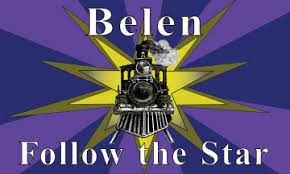 This thing looks like it was made in Corel Draw. It’s not just fine detail but it’s fine detail you need a clipart library to replicate.

This is what I mean when I talk about American state and city flags being bad: So many of them are so bad they need multiple categorical levels of types of failure to make sure I can convey that I’m not just being randomly mean to things that don’t meet my personal aesthetics, but that they are doing things that push them into the realm of inventing new mistakes.

Meanwhile if you’re curious, hey, Belen updated their flag, to this: 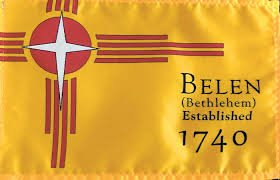 This flag is better, but it still breaks the rules.