Sushi Go is a Gamewright card game defined by a charming visual aesthetic of cartoon sushi pieces going around the table as a sushi train. Each turn, you take a piece from the sushi in front of you (your hand), and pass the rest of your cards to the next player, representing a rolling line of sushi that you can pick and choose from to cultivate a plate of complementary flavours. There’ll be some things you don’t quite want as much, some things you enjoy, and in the end, the stakes for winning or losing are all very low.

It’s a famous enough card game at this point, you might almost expect the praise you’ll hear for it, how the game is simple, how it’s charming, how the aesthetic holds together well, how the colour palette is bright, and how the theme works with the mechanics and it all fits nicely into its tight little tin. These are all reasonably true things about this well-regarded little draft game, and I would not for a moment try to refute any of them.

It’s perhaps obvious to say that ‘good game’ is basically a meaningless phrase. I use it mostly as a reassurance – there’s a certain ‘gameness’ that a game can reach and part of it is if the game functions and I can find it engaging and something like fun. It’s not really a meaningful thing, it’s almost a platitude and it’s a preposterous thing to do, but I do it because I feel if I don’t make it clear that these games are good, I’m somehow doing a disservice, committing a cruelty. It’s the preposterous way where I can feel like I’m somehow being mean to people by being mean to things they like when a more reasonable response is ‘deal with other people not liking your favourite things.’ I can’t hurt Final Fantasy X’s feelings. 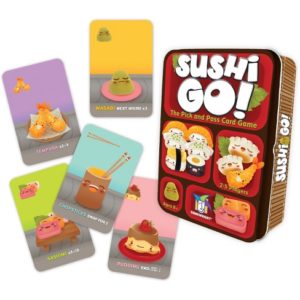 Thing is, Sushi Go is a game that I’ve played quite a bit of lately, and which I will absolutely keep in my collection and will almost always throw in the bag when I’m getting ready to go somewhere and will even recommend to students to take apart and critically examine – but it’s a game that I will move on from every time.

This is not about a right or wrong way to do things, but a choice. In Sushi Go, you don’t know what sushi will be in each particular hand, which means you can’t plan a strategy when you know the game in advance. In Sushi Go, cards become less valuable as the game goes on, meaning that you can be handed two or three hands where there’s nothing worth taking. There’s almost no mastery involved – once you’re familiar with how the pieces interact, you’re not going to have an advantage over newer players beyond being able to track your cards and theirs.

The game is extremely unsurprising once you get the basics down and the points range for winners and losers can be wildly out of whack just because one player took a shot at Sashimi in a hand where there are only two of them available. This isn’t to say there’s no strategy in the game – there are ways the game can go wrong for you, and the ability to memorise your hand that’s going to loop back around is a meaningful one – but the strategy’s impact is always going to be hampered by the degree to which the initial picks and initial draw all work out together.

Then there’s the fact that each individual draft choice is boring. Nothing happens. You draft draft draft, then at the end you do some math. This reminds me of the question of when Scrabble Ends, where no matter how active your behaviour was in the draft portion, the ending is a bunch of math homework. This is where your mastery kicks in, where players can do the math quickly if they’re familiar, but if anyone isn’t, then everyone has to wait while the slowest player manages.

These are all choices. They present problems, and changing the game to address them would involve changing what the game is. I was thinking about this as I compared the game in action to LFG, a game Fox and I made, where every drafted card is a little event and you’re chaining a sequence of actions together to make your little team. LFG there’s a lot of chaos (especially in big groups) but every choice makes something happen. That means each draft creates a question of whether you’re advancing yourself or retaliating against your opponents. It’s a choice that lingers in my mind because LFG is directly in competition with Sushi Go in my mind, with similar price points and play times.

Now, none of these comparisons are to say that Sushi Go is bad and LFG is good. If nothing else, LFG is more complex, and there is real value to be had in dealing with mastery. There are choices there, choices I made about when I want the game to be exciting and interesting, and the choices made in Sushi Go are different. Not better, not worse, just different.

Sushi Go is a great game to have in your collection and it’s a great game for getting people into board games. It’s an on-ramp game. You can play a hand of it, maybe two or three, and it gets people drafting, and it teaches the basics of a mechanic you will see in a lot of more complex games if the players are looking for ways to advance. In the same way Forbidden Island won’t be your favourite game, Sushi Go is probably only going to be an opener and a learning tool. Quite good, but the choices it makes don’t satisfy in the long run.

Also, the card backs just showing ‘Gamewright’ and a vague pattern is dreadful.