When it comes to D&D books, you’re talking about what amounts to academic reference material. That’s not a slam on the game, of course – I’m not objecting to the games or the playability of the game, as if they’re now these dusty tomes that are only meaningful in a sort of hypothetical framework. It’s more that the books are literally designed to be reference material for a specialty field. These books are dense. That can present a challenge in giving someone who isn’t already versed in the game a way to understand that book. Do we talk about specific chapters? A point by point analysis? Do we look at just an excerpt?

I think in this case, at least for now, what we want to talk about here is an overview of the Dungeons & Dragons 3rd Edition Epic Level Handbook.

This book is a punchline.

In base 3rd Edition D&D, characters are presented as levelling up 20 times; each base class went from level 1 to level 20. There were rules about getting new stats and feats at levels divisible by 4 and 3 respectively, and charts that showed how much XP you needed to gain levels all the way up to level 20. It wasn’t dictated by a formula (not totally). When you hit level 20, the game was built kind of around the idea that you’d stop playing those characters, or that advancement maybe stopped mattering for you.

This isn’t to say the rules totally gave up here, because there were some monsters with a challenge rating (the level of adventurers they expected to face) above 20, and when those pesky Forgotten Realms books came out, well, those books with their established Best Wizards Ever all got little writeups that mentiond their characters as being well over level 20, showing that it wasn’t impossible to go over level 20.

Now, here’s a tidbit of trivia for you: the levelling chart was text they claimed as copyright, not part of the ogl. If it could be easily and perfectly extracted with a rule (which it almost can), it would be a ‘rule’ and they couldn’t claim it under the same regulations (because you can’t ‘own’ rules, just the text of their explanation).

The upshot of this is that the rules officially cap at 20, and they don’t perfectly scale above that point, which they shouldn’t have to. But the Epic level handbook isn’t about bolting on another ten levels no no – it’s about making sure you can scale up infinitely.

Directly, this means that the Epic Level Handbook is about welding infinite scaling onto a system where every step of progresion from 1-20 was fine tuned. They weren’t balanced – god, it was so easy to make a crap character in 3rd edition – but the gulf between mistakes in the first 20 levels and the next infinity levels gets wider at a rate that’s even more preposterous than you think based on that jokey description.

The book had new feats and applications for skills for everyone who wasn’t a spellcaster. This was garbage, and bad, and inadequate. I’m serious, I mean it’s things like ‘you can walk on walls with a DC 80 climb check,’ which means your climb check compares now to a spell effect the wizard has had since level 1.

It also had Epic Spellcasting. 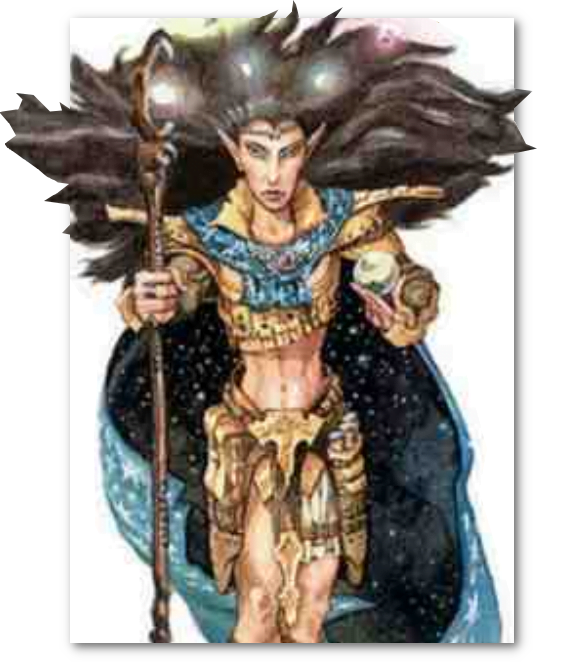 Epic Spellcasting is kind of hard to convey to people who haven’t wasted their life trying to make a point-based system do dumb things. If you’ve ever played with a game system like GURPS, and then gone ‘oh wait, this can do something really silly,’ then yeah, that’s what the Epic Spellcasting system was like.

Part of the crux of Epic Spellcasting is it wanted to be able to represent big, elaborate rituals involving henges and duck eggs and all that kind of stuff ‘important’ mages did to shake the world, which meant you could make spells tha would, for example, turn every single person who might endanger you into a sentient but harmless piece of silverware, and the thing that stopped you doing this was how ‘hard’ it was to cast. But you could trade time spent casting the spell to make it easier and easier to cast, and that meant your first month as an Epic level character could be spent researching the spell, the second month casting the spell and thereafter the campaign was over, because every dungeon you ever entered immediately became full of silverware.

As a min-maxer none of this really mattered to us, because the books, even full of broken nonsense, didn’t produce interesting threats that could be interestingly challenging. Oh, the monsters in the Epic Level Handbook had a lot of really high numbers and you could make interesting challenges of fighting things if you treated them as meaty challenges to punch in the face. The problem is, this was the level of the game where your ability to chew through large piles of hitpoints was irrelevant, because… again, silverware dungeons. Monsters were given abilities of such overwhelming unfairness if they got to do them the only option was to ramp up the arms race of wiping things out before they ever got to take a turn, which, back in 3.0, you could absolutely do.

In the Epic Level Handbook there were some ‘epic’ threats that were absolutely things you could just melee down as a level 15-18 character, and everything else you had to deal with in the same basic way you dealt with everything late game: With broken magic nonsense. So typical was the broken magic nonsense, by the way, that there’s a sidebar in the book that explains two common forms of late-game wizard nonsense (time stop and ‘scry and die’ tactics) and says that you – yes you, the DM! – need to come up with an excuse to stop them working.

That’s profoundly, embarrassingly weak, by the way. The Epic Level Handbook addressed this problem in a sidebar going ‘well I mean… you should come up with something.‘ 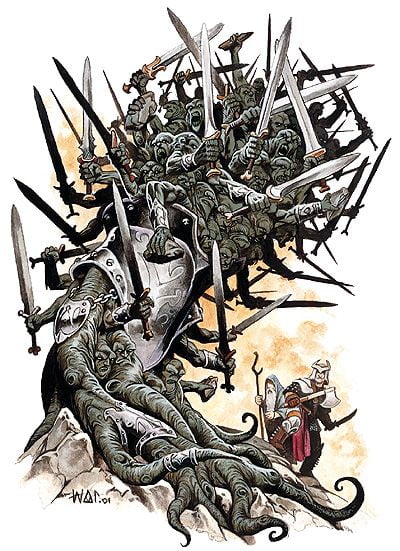 Supposedly, there’s ‘controversy’ around the Epic Level Handbook where it was the first D&D 3rd edition book to get leaked from its playtesting group, resulting in a widespread distribution of incomplete versions of the rules online. That’s super weird to read about, because I was there and I don’t remember this at all!

The framing that the current DMs Guild site uses to describe the ELH is that criticism was levelled at the book in an incomplete state, unfairly, and uses that to describe the complaints about the bad rules and the failure to express ‘epicness.’ Epic – the story idea, not the game term – is such a vague, ambiguous blandness in the context of D&D that that doesn’t seem to me to be a valid excuse.

In this book, by the way, for its example of ‘epic’ included a passage that made me spit. It opens the idea of a passage about the makeups of Epic characters with the list: Baba Yaga. Conan the Barbarian. Cu Chulainn. Elminster of Shadowdale. Elric of Melnibone. Fafrhd and the Gray Mouser. Gandalf. Gilgamesh. Hiawatha. Odysseus.

This is meant to give you the feeling of these important, epic-level characters whose powers and presence drive a whole story. This list includes Elminster (who Wizards own), Conan (who was just a very strong bullet-headed swordsman who was still threatened by things like pirates), and also, some folk heroes and fairy story characters, a literal god angel and Hiawatha, who in case you weren’t aware, was a real person who existed.

Now I don’t want to be insulted on behalf of the Iroquois Confederacy, but I think finding ‘our important historical figure is being treated as a character on level with Elminster‘ would sure as hell seem insulting, especially since in the same list is The Russian Boogeyman. 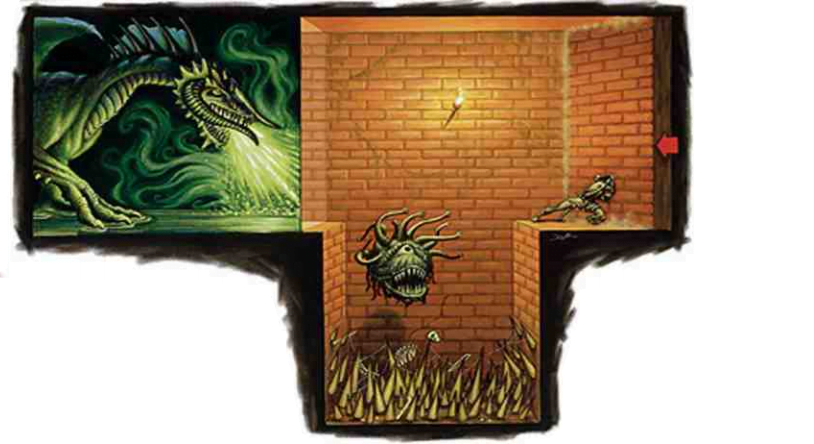 In the end, this book is a categorical failure. It was never going to work, because D&D 3e was a game which didn’t have a handle on its balance, and everything about that failure was going to get worse over time. Even the attempts to make things scale don’t work here when it come to gear and monsters, because even these extremely powerful, templated super-weapons are all still all being made without scaling, and the monsters get scaled up by just adding more numbers.

There’s some great fodder for creepy monsters, and I’ve used the idea of abominations as a great idea for world-shaking scary things. The book is a good draft for the 3.5 book Elder Evils (which is great), and you can pick over it for ideas.

Still, every single drop of mechanic in this book is absolute piss and should be thrown out, wholesale.

Why did I go over this book I consider so worthless?