I have kind of bought Hyrule Warriors twice now, and never played it. It’s a game for Fox, a game that blends together her beloved Legend of Zelda universe – a series normally renowned for kind of tight, expertly designed small-scale adventure problems – and the indulgent, wide-open reckless ridiculousness of a Dynasty Warriors game, known as the genre of Musou. I say it’s a genre because even if nobody else was making Dynasty Warriors-like games, there are enough of them to be a genre.

Content Warning: Will contain spoilers for the plot of Hyrule Warriors. 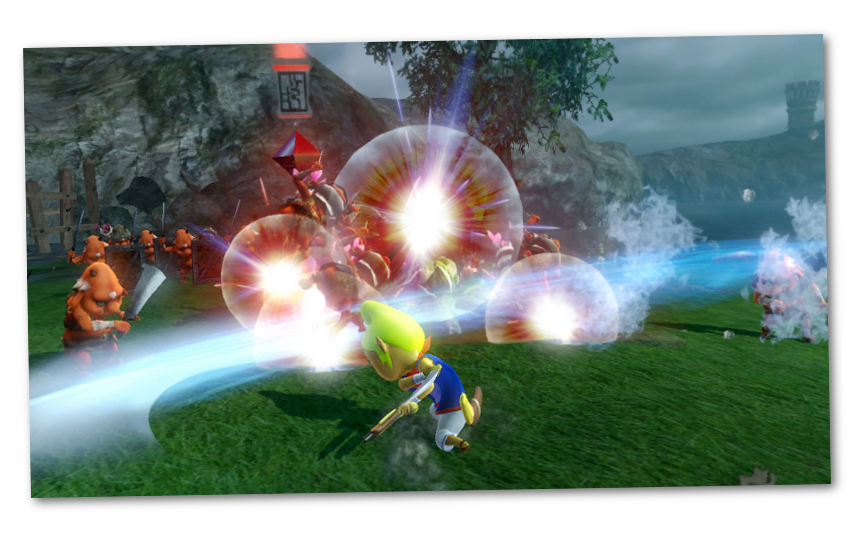 While I haven’t played the game, it becomes a presence in the home immediately, and there are certain sound stings that mean you get a feel for the flow and ebb of the game as it’s played. It’s kind of comforting, and also kind of annoying, but not enough so that I’d do anything to change it. This means that as Fox has merrily fought her way through things on the Switch in our den, I have hung around and dropped in and learned how the game plays through observation alone.


Does it have fast, responsive controls? I don’t know, it doesn’t seem it. This doesn’t seem to be the kind of game that cares about precision placement, though. It’s more reminiscent of old-school big-group FPS games, like late-development Doom 2 and Painkiller, where mobs of enemies want to @ you very hard and you spend your time circling around them, forming them into clumps and finding good, solid opportunities to charge into their midst and hit as many of them as possible as explosively as possible. It’s almost like a rhythm game in that regard.

There’s an upgrade tree and there’s a bunch of alternates for everything, like pixellated swords and different combat equipment and you can wield a horse or you can wield a jar that turns you into a tiny fairy while a lady with an enormous bottom flies around spanking enemies for you and there are something like a million levels of the game.

What’s really bananas, though, is the story. 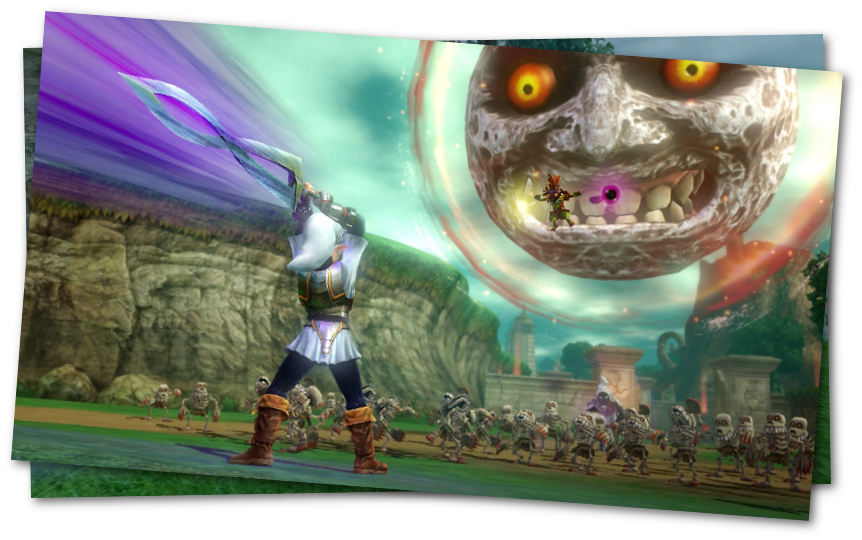 The plot of Hyrule Warriors is pretty bonkers and it very much sounds like something you were told breathlessly on a school bus by a friend who had A Great Idea Last Night after completing Majora’s Mask the nth time. It tells the story of the many different plots of different Legend of Zelda games coming together in order to deal with the actual, proper, no-really-this-person-exists overseer of the Triforce, who has been split into two different forms – an evil, sexy, bewitching sorceress obssessed with Link, and a beautiful, pure pureness maiden who is also very obssessed with Link.

Ganondorf gets this overseer of the Triforce to do a thing to resurrect him, which involves opening some gates and going to all the worlds, but crucially, this is all across all time in the Legend of Zelda universe, and that means that the forces and heroes and the tools they all have come from all bands of possible time and space for the characters.

Which is to say, this is a story where in diegesis, Midna and Tetra and Fi all hang out, and the story tells you that all the stories from those stories happen in the same place, just across different times, and that yes, the fan theories about multiple time streams and splitting time from Ocarina of Time is necessarily true, confirmed by some kind of official source (though I know, it’s not Nintendo, so whatever).

And you know, this kinda sucks! 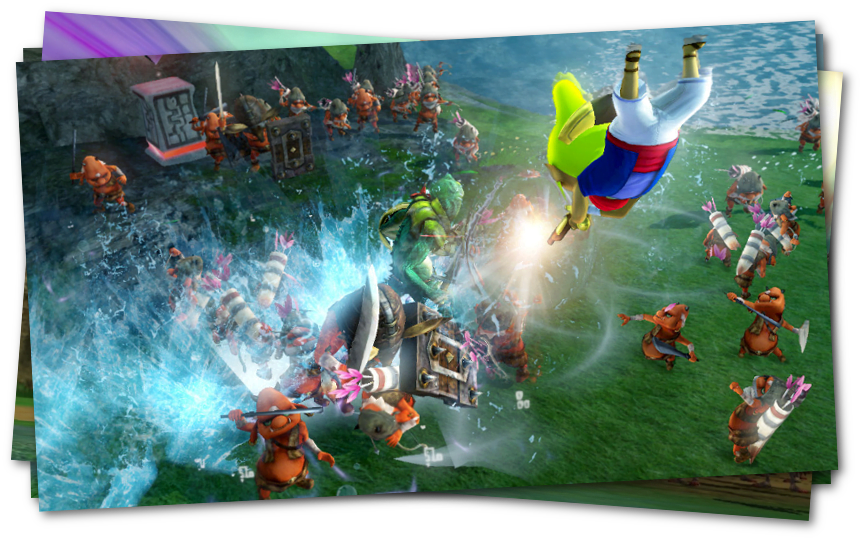 I’m not trying to say people who like to play around with the storylines and timelines of the existing Legend of Zelda games are bad. They’re really not. This game, this wonderfully goofy, indulgent, dive-in-and-soak game, is a beautiful example of ways you can use the interconnected nature of texts to create wonderfully interesting, diverse stuff. The problem arises when a version of the text has to be right.

Big word, so let’s break it down in stages.

Text. a work, a creative thing. A story is a text, a song is a text, a movie is a text. Yes, that’s confusing, but we don’t have a good word for it that doesn’t imply it’s about words. One of the pitfalls of English, I’m afraid.

Inter-text-uality. Okay, so this is a term devised by our old friend Gerard Geanette, describing the you can use whole texts as tools to examine other texts. One of the easiest ways to do this is to look at a movie and ask if it’s a retelling of a Bible story. The Matrix, for example, or you could use Star Wars as a lens to examine The Legend of Zelda: A Link To The Past.

Hyper– is a prefix referring to the idea of doing something a lot, or rather, beyond a reasonable boundary. Hypersensitive means being sensitive to the point where it’s a harm. Hyperspeed means speed beyond reasonable boundaries. Hyperventilate means to breathe and gasp too much in a way that makes it hard to actually breathe.

Hyperintertextuality is therefore a term that, as far as I know, I’m the first to use when complaining about silly videogame stories. It’s the idea of treating a videogame – the text – as related to as many other texts as possible, to find the boundaries of that text, to assume that all components of the text are part of a singular, absolute point. In the context of The Legend of Zelda, this hyperintertextuality expresses in the need to be able to present all the stories, all these different texts, as secretly and absolutely part of the same big text. 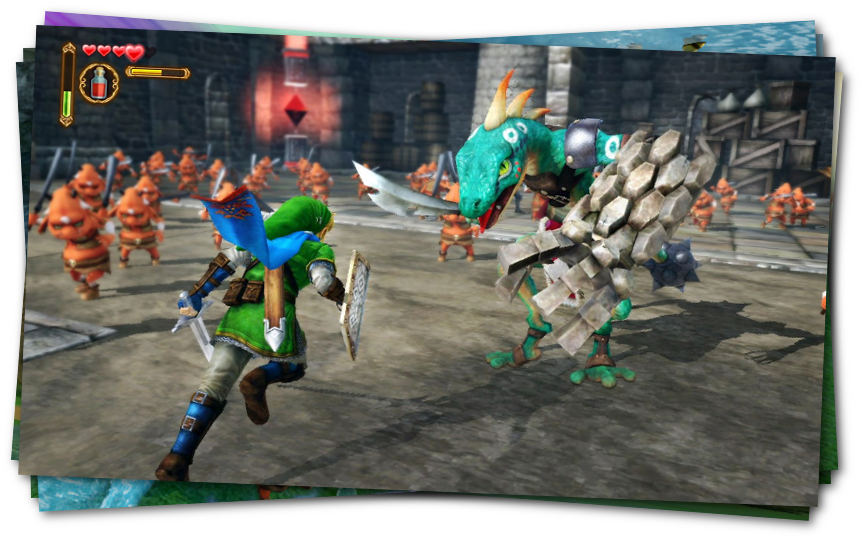 You might have seen me talk about hyperintertextuality last year. At that time, I was talking about Night in the Woods, to an extent, and to a lesser extent, Dark Souls. The issue was not ‘a need to play with story pieces,’ or a desire to see similarities or possibility space in the world of The Legend of Zelda.

The issue was needing it to be right.

I think that putting all the Legend of Zelda stories in a single universe is honestly pretty bad? It speaks of the idea that Ganondorf can not ever be redeemed, that the world is always one man’s actions away from vast peril, that the universe as we understand it is always only ever worth visiting and examining when it is at risk of dissolving away into nothing.

Does this story get better if you know that Ganondorf keeps happening, that the Triforce of power constantly creates dangerous, corrupt despots until it is dispossessed, that this world, the same world, is always and constantly being cast into the cycle where an eternal hero returns, and it’s always the same guy? Is this story better if this is a world that always needs the one person who can fix it to fix it?

I don’t think it is. I think making these stories part of a single, actually-connected narrative makes them all a lot worse. It makes Hyrule a much nastier place of destiny and ruin.

But so what? That doesn’t mean you can’t enjoy it. It doesn’t mean enjoying it is a bad thing. Playing with these storylines or seeing a world of interconnected texts is fine.

Now, I haven’t played this game. It looks like it’s fun, but not the kind of fun I want to play around with. It has multiplayer and Linkle. Maybe that’s your thing. Either way, I’ve paid for it twice for someone who loves it, and it’s made her happy – so I see that as a very worthwhile purchase.