Get your keys and keep up.

Full Throttle doesn’t merit a plot synopsis, because you know what you need to know in that you’re playing a biker wrongfully accused for a crime he didn’t commit in a strange maybe future, who’s out to clear your name as it’s been tainted by the foul evil villain as voiced by Mark Hammil at his most scenery-hungry.

Full Throttle Remastered is one of those things I never thought anyone would bother to do but is so perfectly suited to an archival remastery, because it was a time capsule of the last days of the golden age of the point-and-click adventure game. It’s a game which was at the late part of that time before we became focused on the potential of the first person shooter, before the great and exalted rise of the 3D graphics card and the games it could enable. For the purpose of this conversation I will describe Remastered and Full Throttle as functionally the same thing for this purpose, because the remaster is almost perfect. 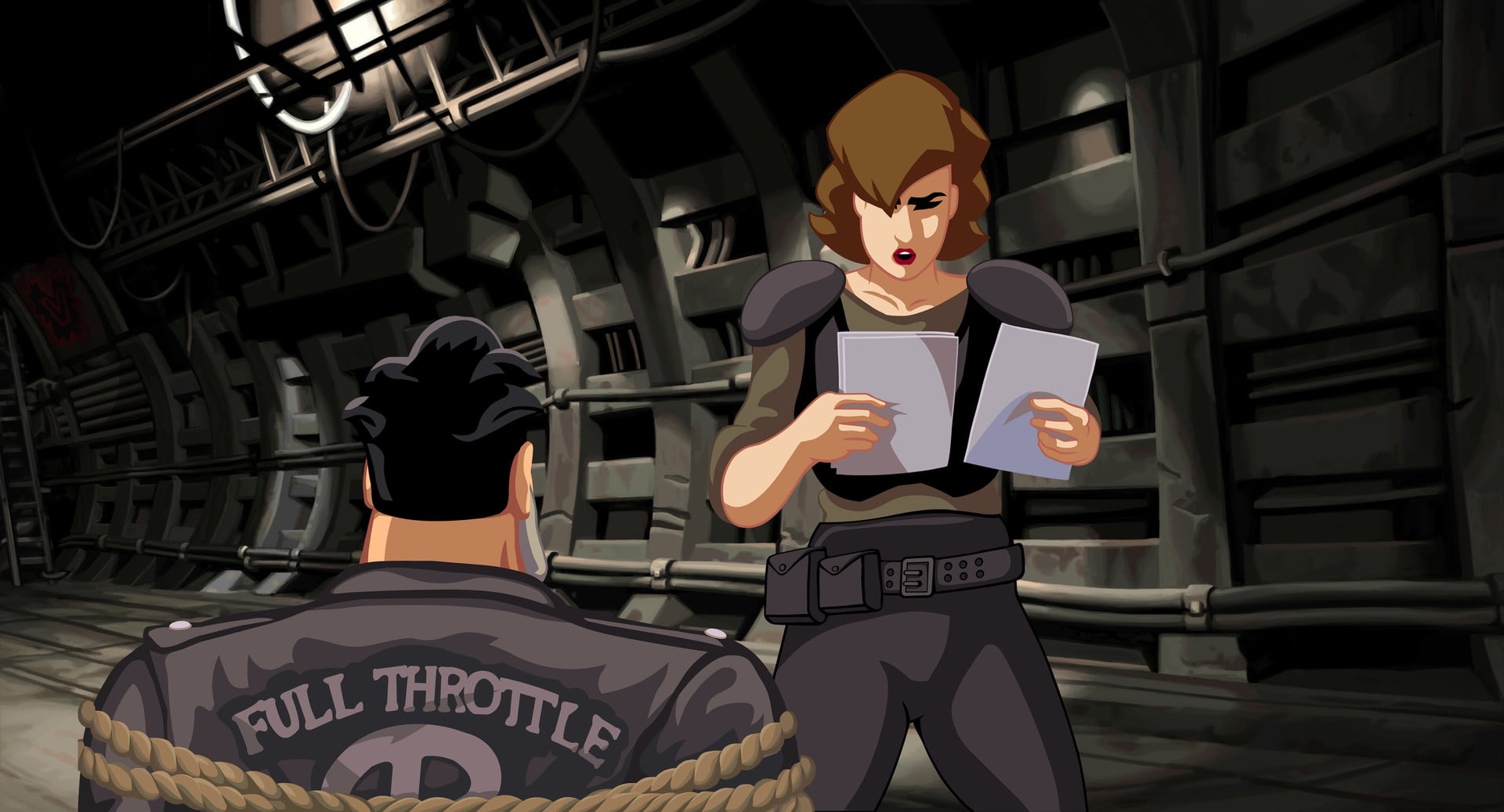 When I describe Point-and-click adventures as being about trying to find the things that trigger proper – or improper – reactions, Full Throttle plays this to its hilt. The interface is minimal, but unlike Discworld, the minimalism isn’t made at the expense of information: You can still look at things, and try a variety of ways to interact with them, but that interaction is pretty general without being completely obtuse. You spend your time finding things you can do that will make Ben do something other than his rudimentary move-to-it animation.

It’s a gloriously animated, endlessly stylish heavy-metal road trip of a game, plowing on in one direction without any reason to care about looking back while the soundtrack pounds on. It’s a three-act structure which truncates its downs and gives you room to breathe find the right people to punch. It’s a game where your typical collect-three-item puzzles don’t ever throw you for a loop. It is a pure point-and-click game.  It is a point-and-click game with almost all of its excessive time-wasting cooked off.

There’s this thing where the game is remarkably small and fast, and thanks to the way the game is structured it doesn’t feel at all like a problem? You can finish Full Throttle in an afternoon if you’ve never tried it before, and the experience is much less like a meandering wander as in most of these games, and more like a grungy post-apocalyptic road-warrior style movie.

The story is about a series of bridges collapsing behind him, keeping each story chunk from being about finding something back in the past you lost or missed. I honestly really like this: If it wasn’t for the sheer extravagence of the game’s budget, it would have been a perfect model for the way smaller indie games should be represented. It’s a lesson learned well and internalised by other games like the Blackwell series. 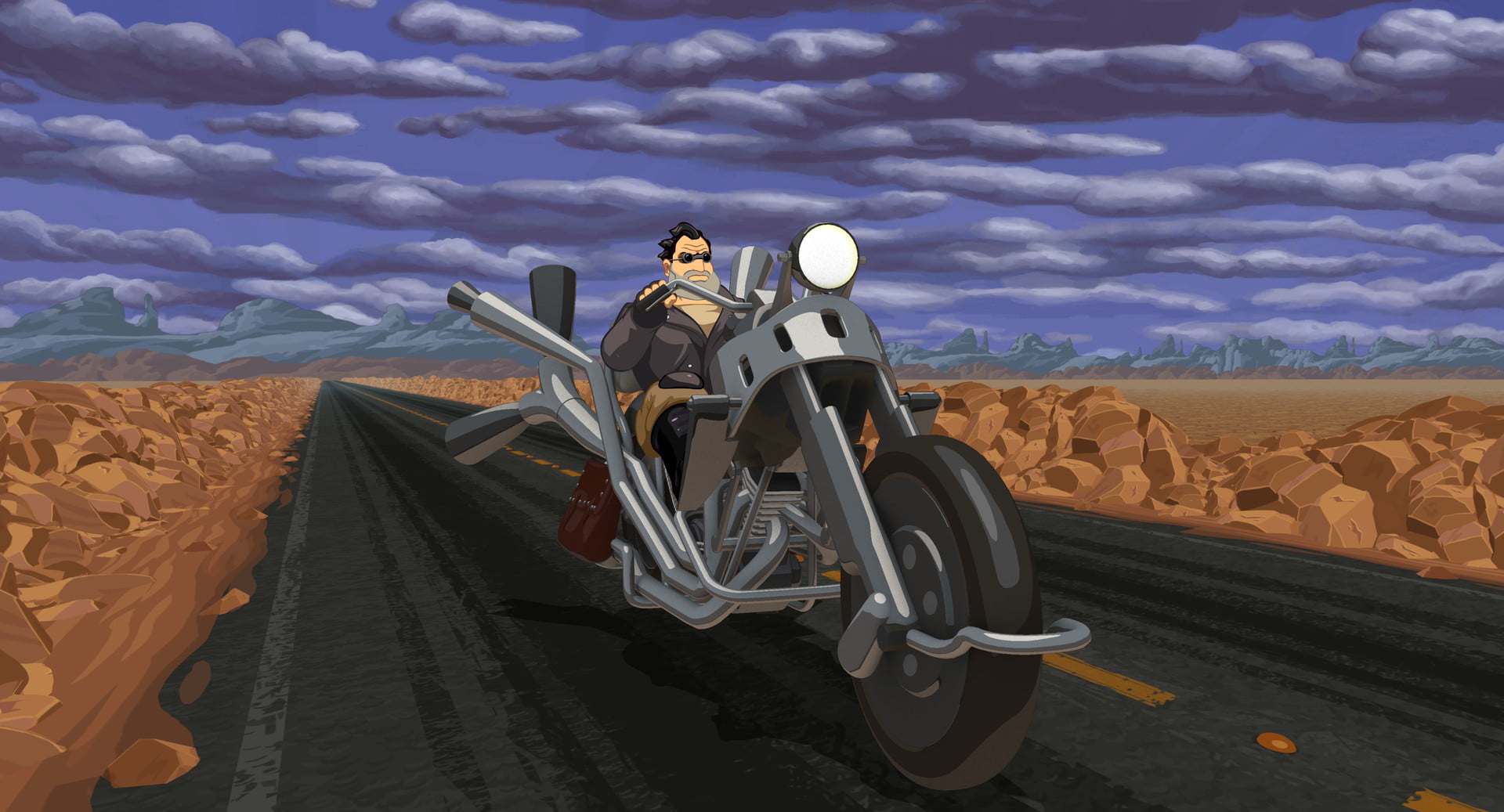 The limited range of options doesn’t hurt the game; the limited range of sets don’t. Instead, it lets the game focus on making its smaller number of interactions more interesting, where you can get a clear description of most things, and the game even makes Ben’s low, gravelly ‘Hm, no.’ fast.

The other thing is the genre of puzzles are mostly all simple: Ben solves his problems in a very limited range of ways, and that means most problems sort of explain themselves reasonably quickly, too. There are a few ‘breather’ puzzle areas, where you’re left with a little space to look around and try a lot of things, but in those spaces, you’re not presented with many tools, meaning you can, if you try, brute-force a lot of puzzles.

At the same time, though, a lot of the puzzles are sort of impossible to brute force! And when you solve those ones, you feel like a dang genius! The game already tells you: We only have these few ways to interact with things, you have to use them.

Ultimately, Full Throttle is a game where all the other high-quality moments are built around the game’s excellent conveyance. Inherently, Ben is not a character who carries around a lot of heavy weight, he’s not a person who will pick up every minor detail around him – so instead, the game burns bridges behind you and starts you on new paths regularly, making sure you’re not left with the nagging fear you’re not using the right things.

Here’s the screen you’re presented with: 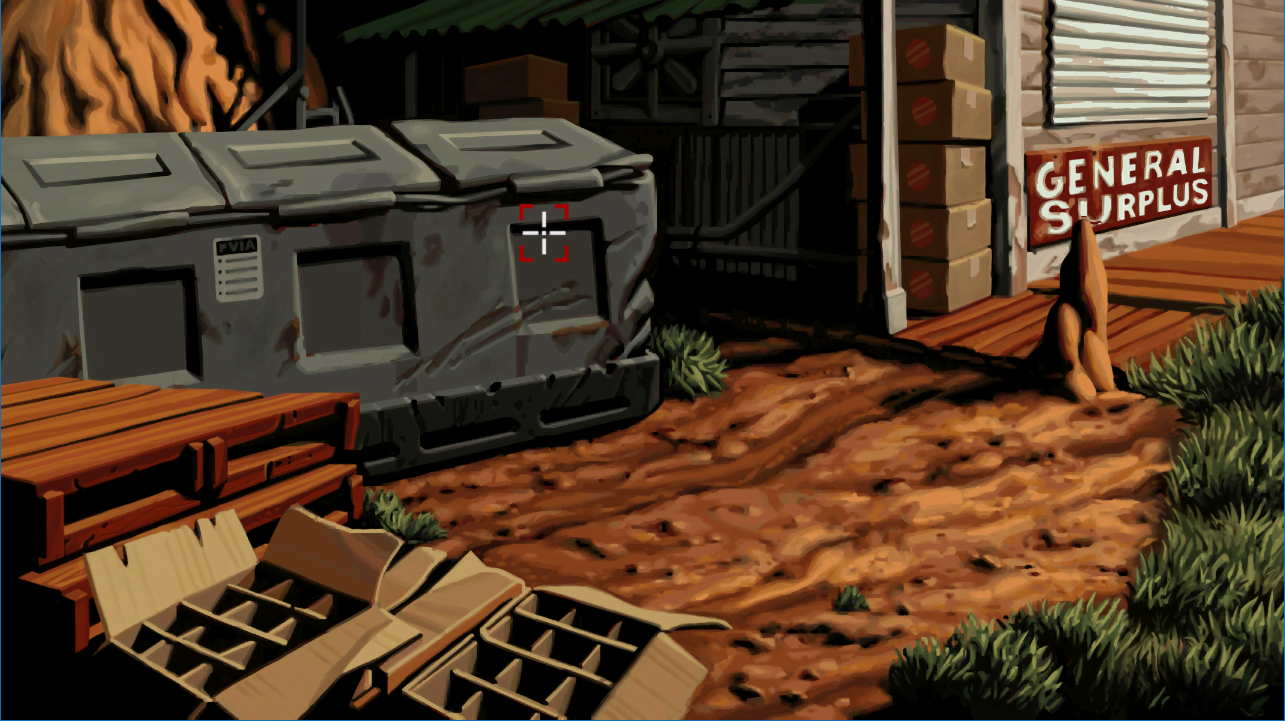 You can do nothing. No interface. No inventory. The only thing you can do is click – and the only thing that lights up as clickable is the side or top of dumpster. If you click the side, you get round bubbles showing up distorting the metal. If you click the top – off goes the lid of the dumpster, and Ben gets out, hoists himself to standing and now, go! Time to solve puzzles!

I think you can tell a lot about how you’re meant to play this game based on just that first impression. It isn’t just a really funny moment, it shows you that this is a game where you can solve problems with your fists.

I think part of the art of a remaster – that separates it from a remake or a sequel – is you’re not trying to make something that looks like it used to look, and you’re not trying to make something with the same starting points but the opportunity to make meaningful changes. Rather, a remaster is like a translation, where you strive to make a new product as if the original product had been made with these tools within these new boundaries. 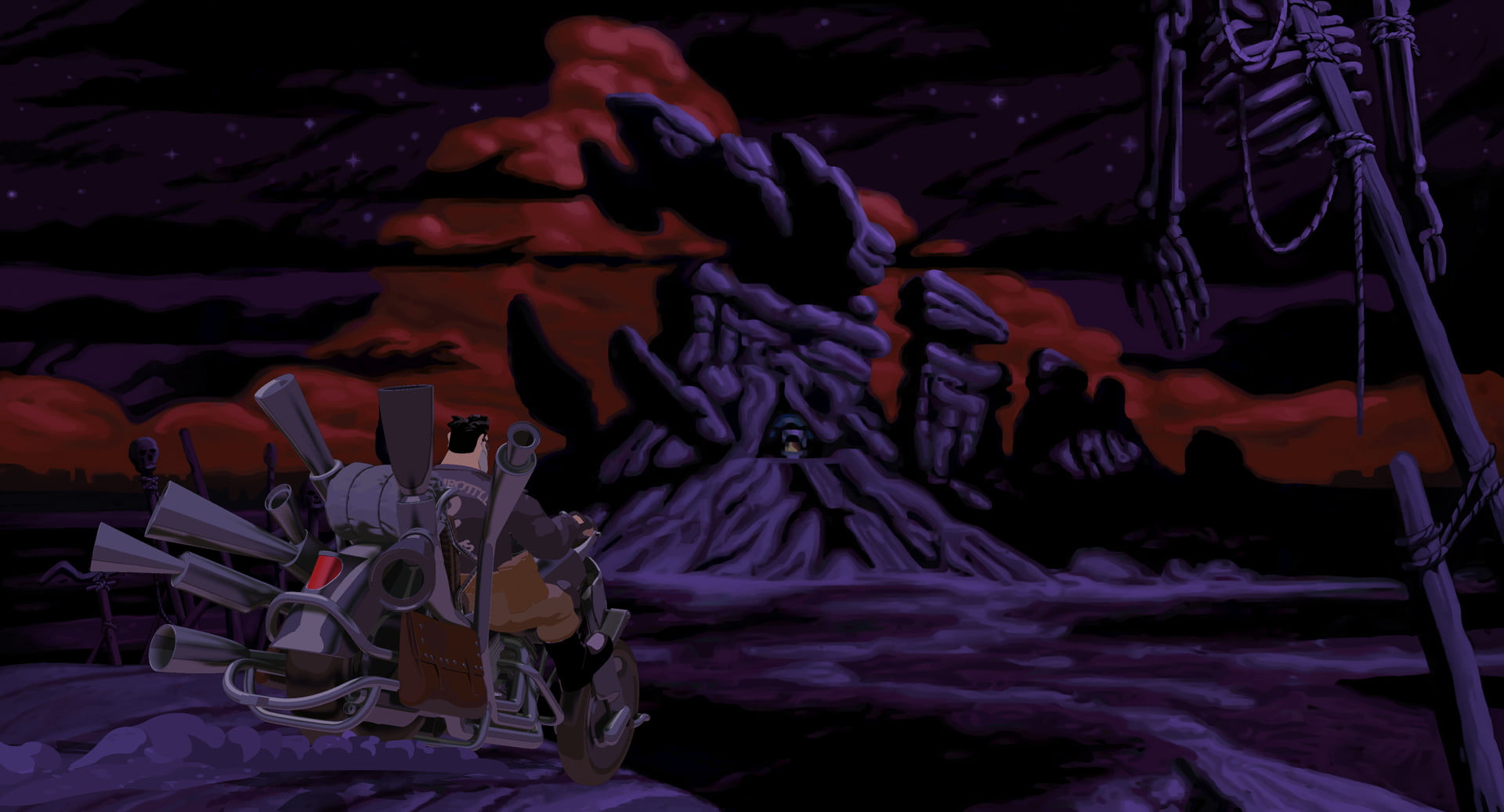 Full Throttle Remastered is a really, really excellent remaster particularly because I was temporarily confused as to what had changed: After settling in, after the initial impression it was easy to lose track of the fact this game wasn’t just the way the earlier game looked, but so good at looking like a better version that it was starting to replace my memories.

That’s not to say that the remaster is a totally perfect exercise. The game stilly only has its own basic controls, which means the combat system, for all that it’s something of a fun idea, just kind of sucks. Like, the idea of it is cool! You can move your mouse side to side, and it moves the bike side to side; touch the sides, you lose your bike, and you can select a variety of weapons, then make timing-based attacks on enemies.

Problem is, it’s unresponsive, and that’s annoying. Also the puzzle is somewhat simplistic – the clues for that puzzle aren’t really very readable either! 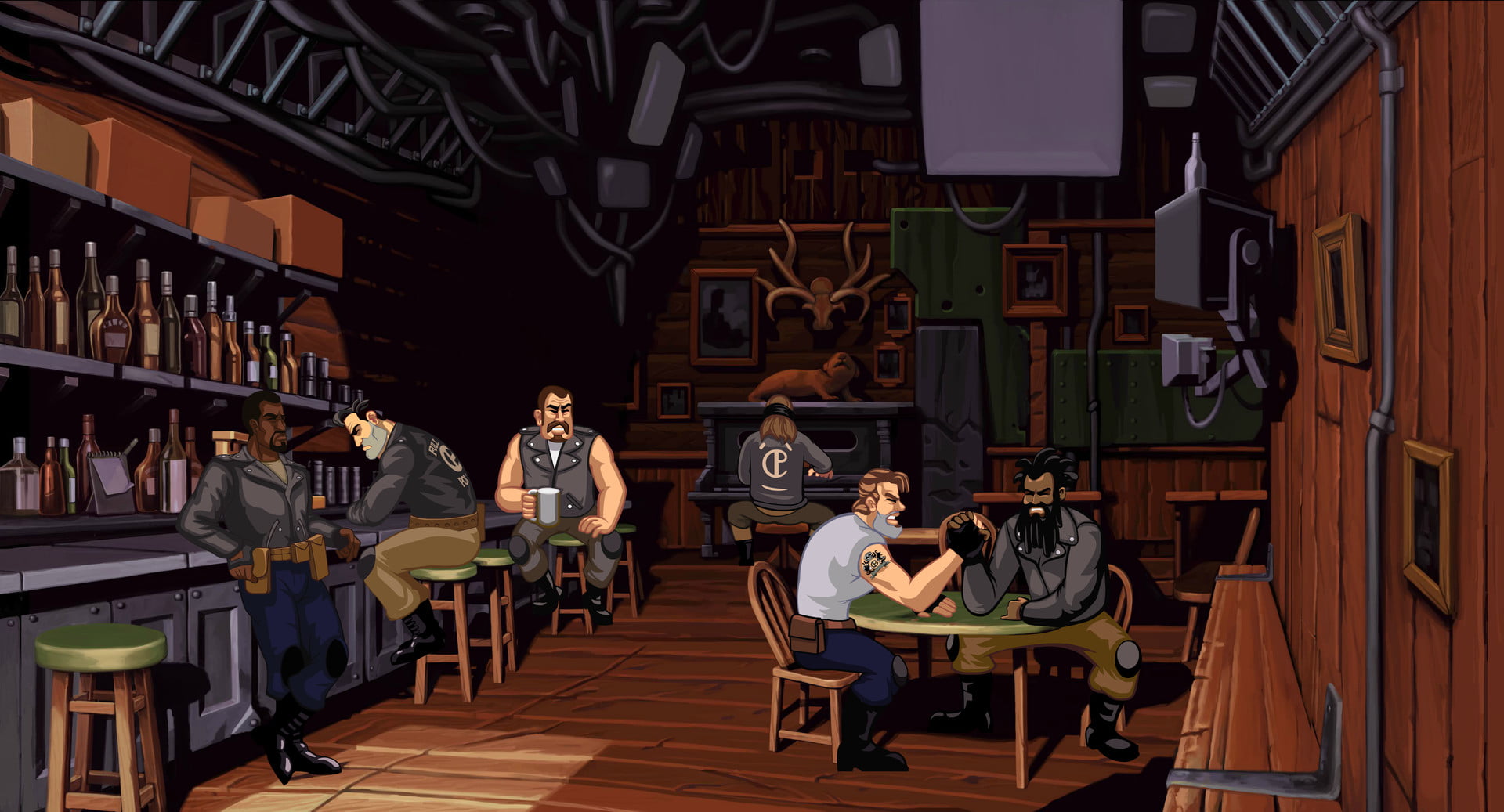 Also, it would be amiss to mention that I didn’t find some way to brick the game – but, the game was kind enough to have an autosave that I was able to flick back to. See, developers, good autosave systems make other problems less of a problem.

The music is fine, or rather, the music is completely perfect as to how it was. The sound is great, it even makes the more awkward 3d-rendered objects more robust, more real feeling in the world. Basically we’ve gotten better at integrating cel-shaded 3D objects than the original Full Throttle managed.

The final issue is that Full Throttle: Remastered will last about as much time as it takes to download. This is a game that compares in time best to a pizza. It hasn’t got a lot of replay value unless you’re a hardcore fan of director commentary, for example, and the achievement hunters amongst you aren’t likely to see thousands of options. On the other hand, it’s fifteen dollars, it feels great and if you’re looking for something to knock off a list, it won’t take a lot of your life to enjoy.

You can get Full Throttle: Remastered at Humble, Good Old Games, and Steam.