While, yes indeed, we are going to Game Pile about a game, we’re going to talk about 1995’s Discworld, a point and click adventure game originally developed by Teeny Weeny Games for Psygnosis, based on the fantasy novel universe of Sir Terry Pratchett’s Discworld. This isn’t a game you can buy – but it is a game you can just have, if you’re the kind of person who doesn’t mind setting up a copy of Dosbox and maybe throwing a few dollars to Abandonia in thanks for their time and effort archiving videogames.

At this point in games’ history, the CD Rom is new, voice acting is just becoming widespread, and the point-and-click is in something of a golden era, because the interfaces are getting better, resolutions larger, and storage space for background graphics are even more diverse, allowing for absolutely sprawling games with an enormous variety of locations and a chance to show some truly wonderful splendour off.

Basically, this game existed at an intersection; it was an era of hand-drawn background art, voice acting on the rise, and before 3d technology pushed us into the new uncanny valley of box-kite people yammering at people, and the delightful tech-orientation of people like Sir Terry Pratchett and his friend Douglas Adams meant that the idea of making a Discworld point-and-click adventure game could happen at all.

If you’ve ever played Beneath A Steel Sky, Gog’s perennial free-to-play game, this game controls much like that. The interface is extremely minimal, with the entire viewing area of the screen showing the game area, in its whopping 640×400 area. 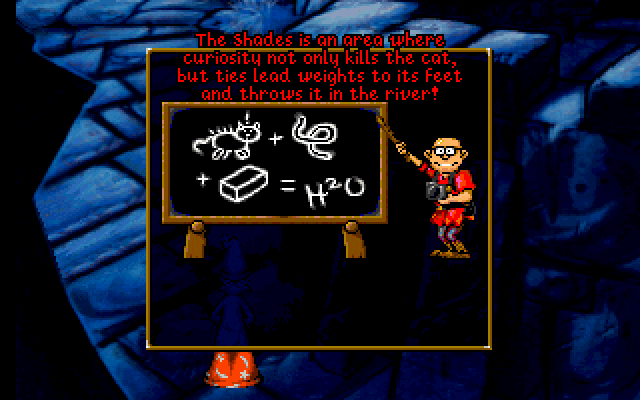 This is a typical form of the Point-And-Click Adventure: You’re trying to find the right combination of icons in your pockets and on the screen. You can’t rearrange things or turn them around or, in this case, use even specific words on them, the way that some games in the Monkey Island or Quest trends could and did.

There weren’t even vocabulary puzzles, either. Instead, the basics of Discworld were that you found a variety of confusing pieces and spent time muddling around trying to connect them to one another somehow. Now you might imagine that this sort of structure gives you a very limited range of puzzles; most of them are about just attaching item A to item B and maybe item C. Right?

Naturally, this means puzzles are kind of limited in what they can do which means, in the classic vein of such things, you’re left trying to latch onto the thread of what exactly the game wants you to do. There’s nothing indicating where items belong, or if items are in the right family of effect, there’s no signalling that some items might or might not be used in this puzzle, or if it’s something else, something weirder.

And of course, as is the tradition, this game has one genuinely completely incomprehensible puzzle, the kind of thing whose objective is utterly unrelated to the method you use to fix it. Bonus, this one has some hilarious bestiality and sexual assault, which – goodness, the 90s were a very different time.

What I’d say is wrong with this game, in one word, is conveyance. The game takes you from one small area of puzzles, where you have a fairly simple sequence of possible locations and parts you can fool around with, and then opens up the gateway to not only a huge number of options, but also does it without any signposting at all. It’s dizzying!

It’s very reasonable for you to hit a wall just after the Unseen University, presented with an enormous possibility space. You might be like me, and simply never notice the livery stables, which holds up a surprising amount of the game. The interface is minimal, which gives the sprites a lot of room to show off, but the sprites aren’t actually super well separated from the really lush, lovely backgrounds, and in some cases they’re items that are a few pixels big and are moving, which is just… gah! 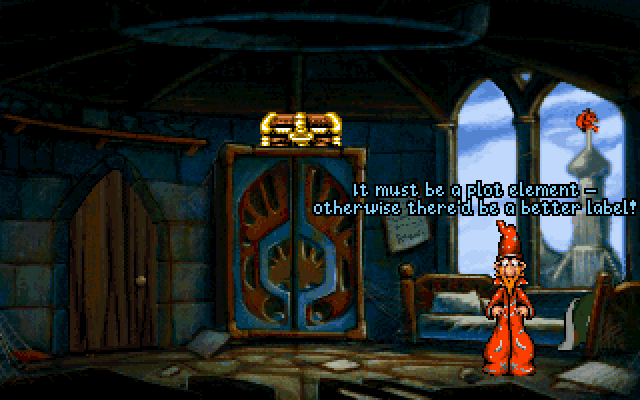 Yet, I do clearly still like this game, even for all its faults, and let me tell you, it definitely has faults. And I think the reason for that, beyond nostalgia for its game’s type, and beyond the fact the game is just so funny, there is still something here. It isn’t even just the setting, a place I spent a lot of my childhood learning about as if the Discworld was a good first fantasy novel series.

I think the thing that keeps Discworld from being just a fairly standard example of a point-and-click adventure game is something of the game’s widespread sense of mischief.

Up To No Good

There’s this thing with the point-and-click games that seemed to come almost exclusively from Britain in that most of them had a protagonist who was very likely to behave, in the context of the universe, like someone dicking around.

American point-and-clicker games tended towards protagonists like Bernard Bernoulli or Willy Beamish – characters who were inherently timid, who could be opposed by things like a modestly locked door or a jam jar. In a lot of cases, when they were asked to do a thing, would often try to do things that were inherently dangerous, and then blame you for dying. Quest games also favoured the protagonist who was deliberately obtuse.

Some of these characters would act on things you couldn’t know. Sonny Bonds of Police Quest was a really good example of this – you’d do a walkaround of your car to see if it was good to drive, nothing would happen, then you got in your car and drove off. But if you did drive off without the walkaround, the car would fail, guaranteed, every time. You’d often Use Item on Things without really being sure what your character would do with them because your character was someone you were, yourself, blindly piloting. The infamous mustache puzzle in Gabriel Knight springs to mind. 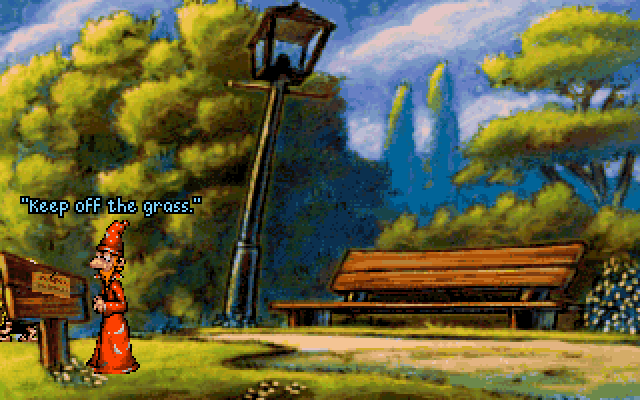 The thing with Discworld – and to a lesser extent Simon the Sorcerer – is the protagonist isn’t sure what he’s doing either. Numerous times there are interactions that lead to items or lead to NPCs being available or whatever that are purely done for just, well, the heck of it. Heck, Rincewind has an animation for being shift and grinning to himself as he sets up something silly. There are numerous times in this game where you’ll do something, find it interacts, then go ‘oh I see,’ and not until much later find out how you can use that interaction to solve a puzzle. Yet despite that lack of connection, your character being a relentless goofus, you will still try it, exposing components of the machinery of the game.

None of this really saves the game from being hideously obtuse, but, and I hope these screenshots show it, the game makes up for it by being both large and vibrant. Sprites in this game are very large – rather than try to cram a lot of detail in a small space with a tiny resolution, the game uses tall sprites to take up large portions of the screen, and instead make things live on wide, large areas, with gorgeous backgrounds.

The Discworld game is currently Abandonware, available at Abandonia, and requires Dosbox. It costs you nothing, but if you have some change to throw around, consider chucking some money their way to help with server costs.