You know if this had been what the Quake wars were about I’d have actually have had a lot more fun. 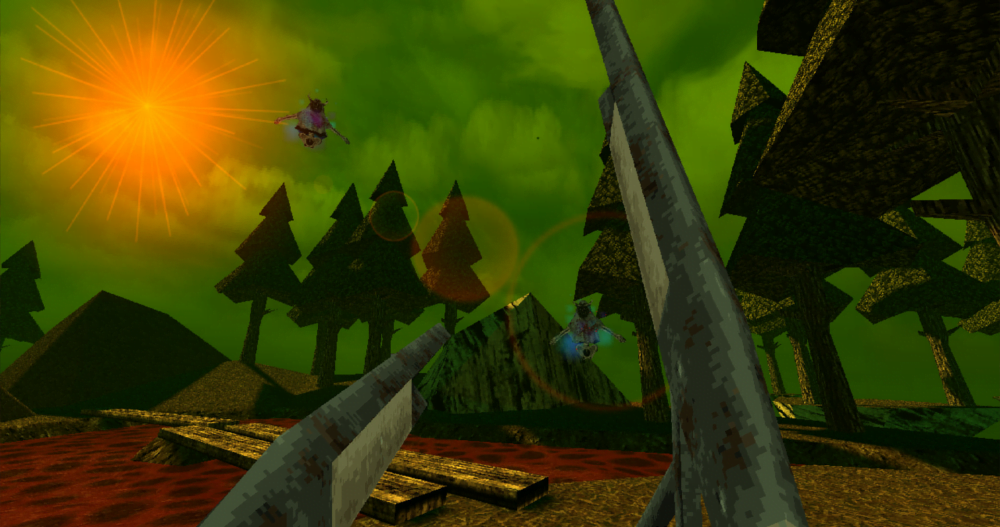 If you’re not familiar with the Quake Wars period of gaming history, there was this period of time when id Software were busy kicking open everyone’s doors with a sequence of PC Games under the shareware model. They had a few early oddballs under Softdisk that I’ve mentioned before, but there were four really important ones: Commander Keen, Wolfenstein 3D, Doom and then Quake. When id showed a thing could be done, there were a wealth of copycats trying to match them, often from people using the same engines licensed from id.

Now, it wasn’t just that these games were free to play and distribute (and you could pay money to get more of them once you were engaged), they were also really good games. Free games were everywhere, just like now, and those free games were often stunningly mediocre – the shareware label may have given us Wolfenstein 3D but it also gave us Hocus Pocus.

No dunk on Hocus Pocus but it’s not good.

During this time people made a lot of games that were trying to be Quake, But. Engines that weren’t quite as good, or engines that tried to keep up with the technical gameplay that Quake had while adding cinematic elements or ‘realism’ or ‘exciting alternatives’ in some form or another. Quake, but Cops. Quake, but Steel. Quake, but Wizards.

DUSK is ‘Quake, but Children of the Corn meets Lovecraft,’ twenty-five years later. 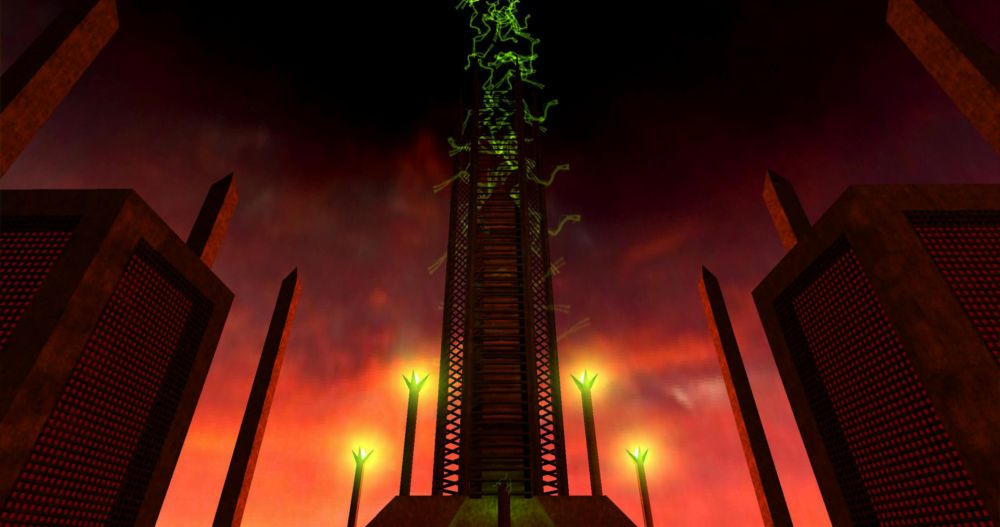 DUSK is a 2018 retro-styled first-person shooter developed by David Szymanski, and in part produced by the people who made Rise of the Triad 2013, another rollicking fun bit of nonsense that I played for a bit then forgot about forever. That game, at the time, I described saying that it was so interested in not saying anything that it does a pretty good job of it, which holds for DUSK as well. The most notable thing about Rise of the Triad was that it somehow managed to be a piece of Gamer Culture that didn’t earn its bonafides by immersing itself in ironic racism or misogyny, and instead made do by being as aggressively brainless as it could be while still needing the bulk of a math degree to be able to get it made.

DUSK on the other hand doesn’t feel like Rise of the Triad in that it’s not polished to the same degree, not as elegantly overmade and riddled with Videogame Nonsense that that game was. DUSK was not the product of a single developer – there’s voice actors, dev support, level design and all that stuff, but while Rise of the Triad feels brainless-by-committee, where everyone took whatever stuff they could make from the original game and smoothed it out so everyone could like it, DUSK feels like brainlessness by auteur.

I’ve talked about how challenging it is to make commentary on the artistic quality of big art before, about how games like Metal Gear Solid V just defy engagement in a conventional critical model, because for every smart, thoughtful bit of cinematics there’s also the sixteen hours you sit next to a woman in her underpants trying to act serious watching horses run soldiers over because their AI is glitching out. There’s an accepted permission to avoid talking about the Game Bits that aren’t congruent with an artistic commentary, and that’s how we deal with a game being really big. 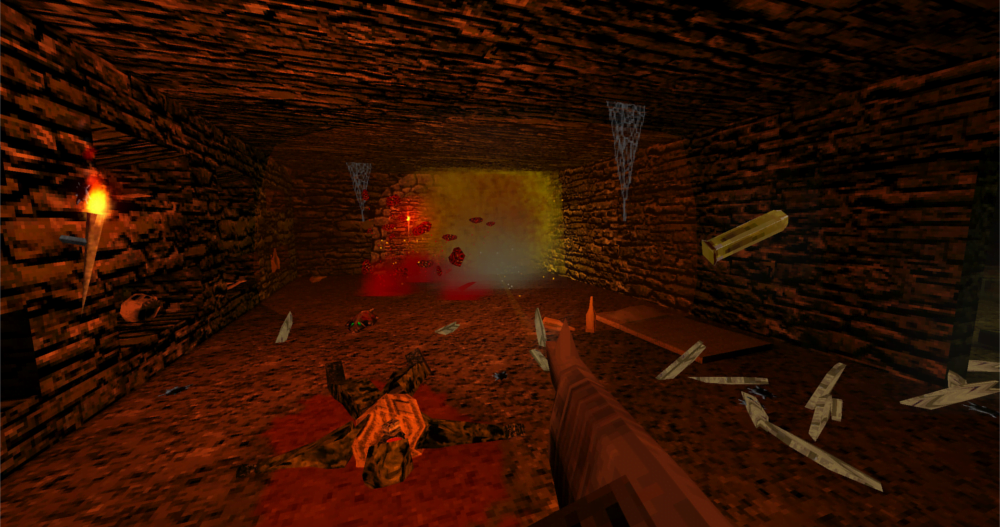 DUSK starts with you in a basement being attacked by three goons with chainsaws, and equips you with a pair of sickles to kill your way through them. What ensues is a narrative that can be best described as an inordinately long run; you grab weapons and you move away from where you started non-stop until such time as you successfully get to the end of the game, where everything stops. It’s not a game with a lot of choices in narrative or subtle exposition, or even exploration-based hints or puzzles – it’s a roller coaster of a game, really.

The speed isn’t just in the narrative, though, where your character seems to cover a few dozen miles at a dead run killing a few hundred people in one long, extremely gory night; it’s also in the world you’re in where your character rockets along like a greased ferret on cocaine, low to the ground and violently reacting to every movement and bright light. This fast movement is reflected in the level design, a world that’s built out of big holes and easy doorways and deep trenches because it wants you to know pretty clearly what a dead end looks like and what you’re meant to be able to jump and what you’re not meant to be able to get to. It’s fun, really, the way this level really uses its level design in a very pre-Half-Life way.

It used to be that games like this rarely used invisible walls (or ceilings, which DUSK does use) because the way you stopped anyone from getting through a space was you just put an actual wall there, and created levels out of boxes. Half-Life tried to fight this, with natural-seeming external locations (that were still mysteriously just boxes) and Half-Life 2 pushed further against it by presenting a world full of seemingly natural spaces, with inconvenient barriers that you could hypothetically havok-engine your way up and around as if the game was about Rube Goldberg balance beams and not shooting colonising alien bulbs.

(The idea of being overly interested in its own technical cleverness and discarding a righteous quest to shoot alien cops in the face is a nearly perfect representation of what Valve have become, by the way.)

DUSK puts you in boxes, presenting walls that are forest-textured and when you ask why you can’t slip between the trees, heartily answers with ‘SHUT UP’ and ‘HERE’S A MOONSHINE VOMITING DEMON POSSESSED CROCODILE,’ and you ask ‘Holy shit, is that the final boss?’ and it says ‘THIS IS THE FIRST BOSS, KEEP UP, HERE’S A DEMON CYBORG HORSE FAMILY,’ and then it ramps up. 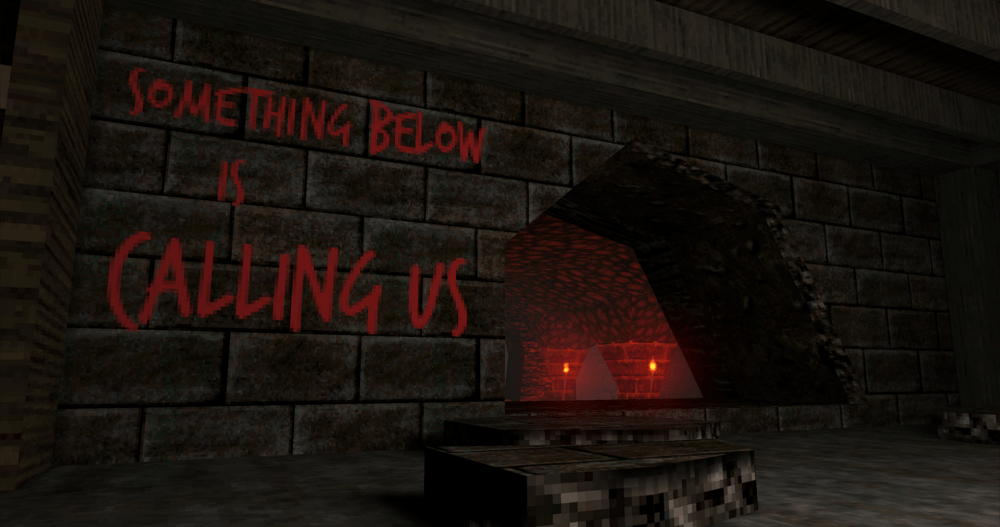 The thing is, while Dusk is pretty brainless, it’s not actually thoughtless. There’s a ton of stuff in this game with a deliberately inquisitive, even mendacious perspective on player behaviour, mostly reflected when you run low on resources and start doing things to make what you’ve got last. When you have to melee opponents to save ammunition, you suddenly value open space an enormous amount because it’s the only way to keep yourself moving away from counterattack. When you need to dig around for health pickups, you start looking at every space around you for nooks and crannies and there’s almost always something there when you get to it.

Secret puzzles are almost all two-step; it’s not just finding an odd bit of wall, you have to find the thing that makes the odd bit of wall move, or the weapon that lets you damage the odd bit of wall. There’s a lot of hunting and checking, and the levels are designed with a lovely sense of flow – sometimes, you’ll find a locked door that you think is your goal, only when you find the key to realise you’re on the other side of that door and now you need to loop back around to find the next step.

There’s also a lot of use of vertical space and claustrophobia. The original Quake engine games were ultimately built out of the id mindset, and that meant more playing with light and dark than interplay of space; Adrian Hall infamously disliked making a doorway too tight because it made the player aware of how oddly sized their character was. 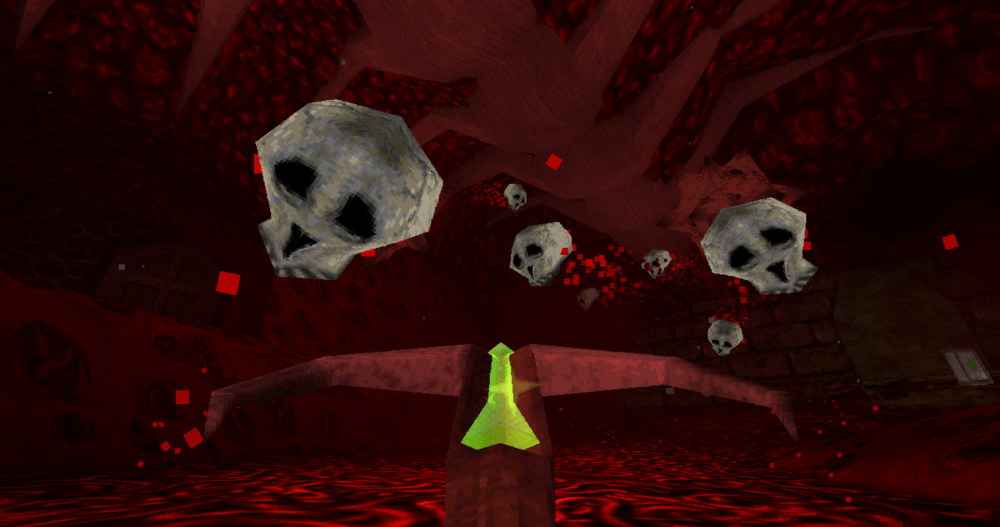 I know I bring up Doom a lot in these kind of conversations but DUSK is a game that learned its lesson from Doom – the weapons are well handled and distinct in how they work. The game does make you struggle for types of ammunition, but you’re seldom reduced to scrabbling with blades unless you royally mess up. Enemies all take a really heavy kicking, too, which means a single miss doesn’t feel too debilitating, which given how fast you’re moving is probably for the best.

The whole thing has a feel not so much of a Quake clone as much as it does a Quake total conversion, and a really good one at that. Rather than spending time and effort on narrative storytelling, the game is instead focused on using its environments and weapons to give you a space, and then using that space to both build your confidence then sharply pull it out from underneath you.

I say DUSK is brainless, but it’s not quite right. It’s not that it’s not a game for thinking as much as it is a game that cares about what you’re feeling.

This is a game that’s aiming for the guts.