As a gamer who went through the bulk of the period known as the golden era of the FPS and the rise of the console to the impoverishment of the PC in the cultural cachet of gamer culture, I have childhood memories of plumbing my way through the games media of the time that wasn’t focused on control sticks and how great the Playstation or Nintendo were, and that means that when people talk about ‘hey remember when’ I almost always have a bunch of ridiculous examples that nobody else, largely remembers. I’m that annoying guy who bothered to memorise the lineage of film history that leads from Hitchcock to Tarantino and wants to take any opportunity to tell you about it, only for PC shareware videogames, a field that could not matter any less but still has a direct line in it from Marcus Fenix back to furry porn then back further to sticking a fish in a door.

For the majority of you, this isn’t the case, so let’s talk about Rise of the Triad.

The game you can get on Steam, Rise of the Triad isn’t a great game. It’s a good game, it’s a fun little popcorn affair but it’s largely so interested in not saying anything that it does a pretty good job of it. Normally games that so avowedly want to avoid commentary come across as mawkish both-sidesishness, but they avert this in Rise of the Triad by just having the game say almost nothing.

Sure, you can dig down into the game’s base assumptions and the first-level ordinance of what the story and storytelling devices are, but getting down underneath the line of EXPLOSIONS ARE AWESOME is Rise of the Triad isn’t a great game. I’m sure there are people who love it, but it’s much more like a sort of generic filler content shooter. In a lot of ways, as a content game, it’s much more about riding a sort of ghost train and laughing at whatever weird or silly thing the game presents you, which it’s pretty good about doing. 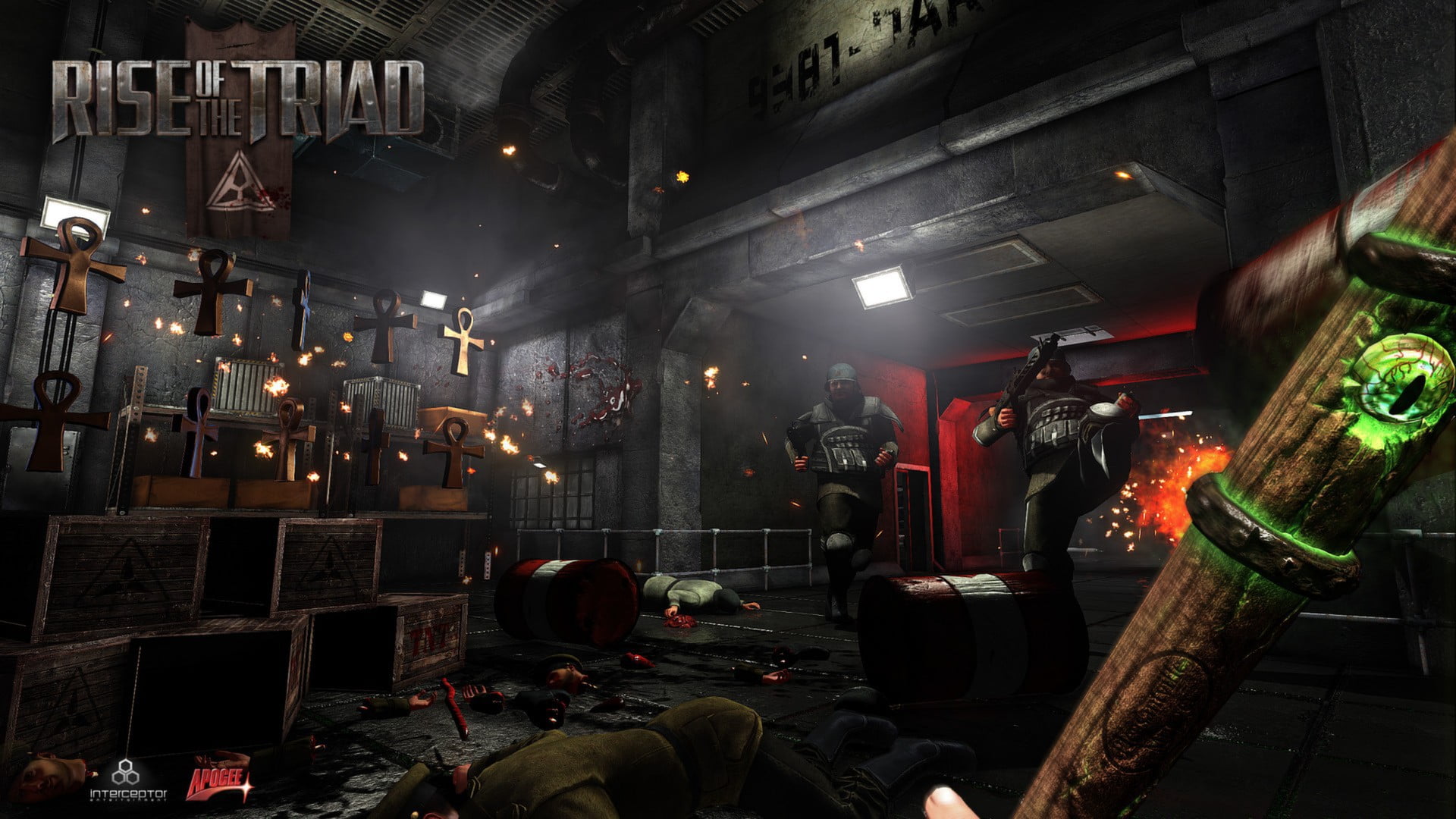 It’s a game with setpieces – which is pretty standard these days, as setpieces became easier to generate than purely complex ludic spaces, and feel more like ‘stuff’ to do, but there’s a certain mindset that puts tiny setpieces throughout the levels. Objects are commonly arranged in neat arcs so you can – with modest skill – pick up everything in it in one run, for example, or you’re given a weapon shortly before a situation where it’d be perfect, if you know how to use it.

Now, this is just basic critique of the game itself, and it’s true, but to me it resonates particularly because, as a remaster or return to the original game’s form, the original wasn’t actually very good? I was kind of stuck there for a while wondering what to say about this Perfectly Good But Ordinary shooter, because for a time there in my mind I’d thought of the original as a Pretty Good Forgotten Gem, only to return to it and realise it was… fine?

A thing you’ll find if you go back to older videogames is their approach to content. Sometimes, you’d get a game that promised you ‘a hundred levels’ and that was, despite what you thought, a trap, because unless the game was Chip’s Challenge, 80 of those levels were kind of just treading water. Rise of the Triad boasted 32 levels, and thinking back on them – after having played the original – I can’t honestly tell you a single interesting thing any of them did. There wasn’t anything like the Doom sense of play cinema. 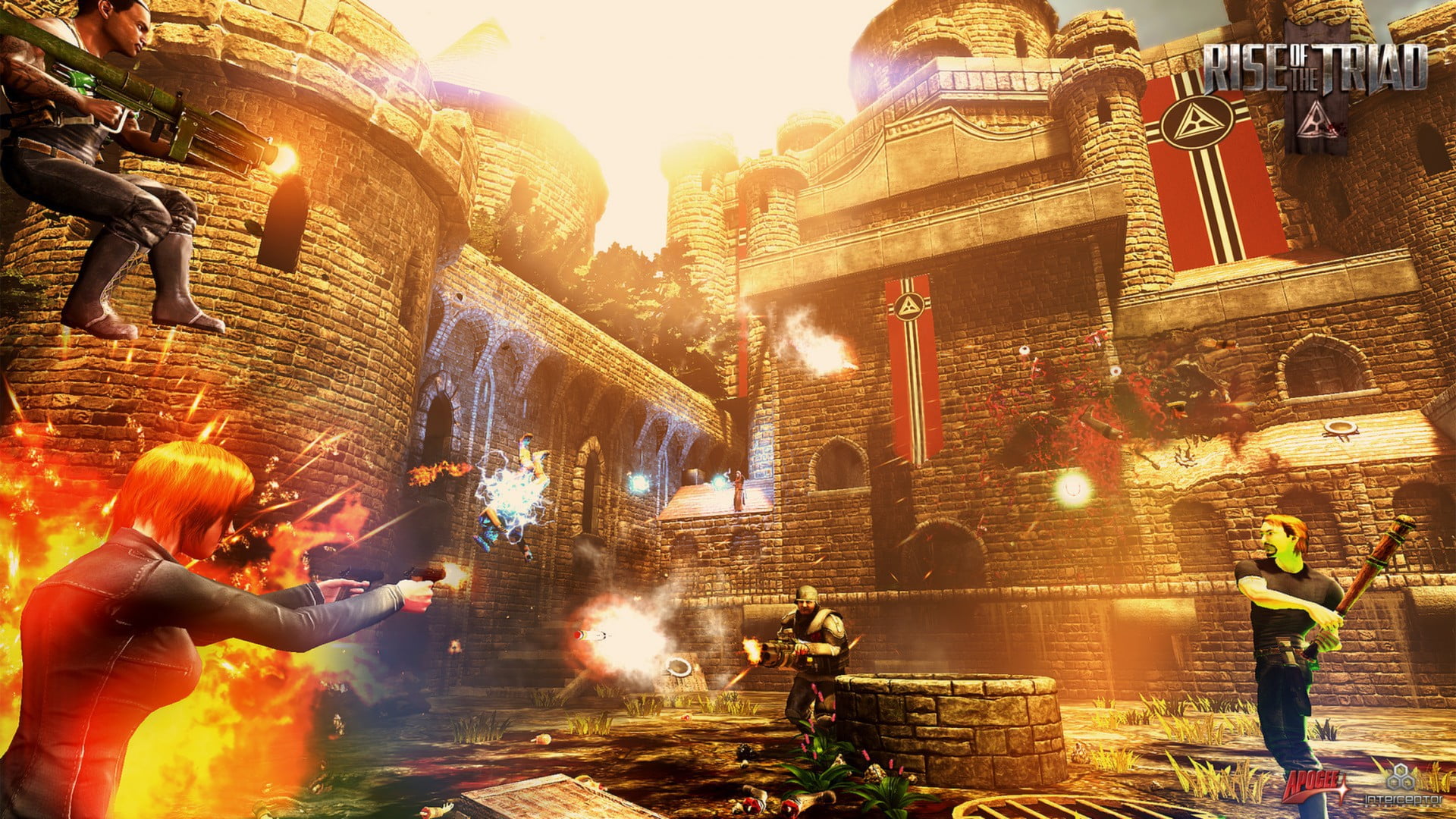 A thing to consider in Doom is how often you’d pick something up and be immediately ambushed, but how that was signposted. Keys would sit on well-lit platforms in the middle of a dark room, as if daring you to take them, a sign of this is important and you will get munted for this. Original RotT did nothing of the sort, at least, not anywhere nearly as intricately. You would sometimes pick something up, then get attacked, but overwhelmingly, the game was full of just spaces connected to one another with some very basic structure inhibiting. The most interesting thing in the whole game is the end boss, after three bosses whoere just Things To Shoot.

Still, it’s not to just say that Rise of the Triad (2013) is straight up a mediocre successor to a mediocre game. In most ways, Rise of the Triad (2013) is an upgrade, just flat out better in every way. It feels better, it handles the mouse better, levels are less blatantly boxy. Good stuff. Oh, and the weapons are a bit more distinctive visually so you’re more likely to guess what they do based on how they look, rather than winging it.

Still, there’s something about the new game that’s worse than before, and I can’t believe this is an area where a Wolfenstein era game did a better job than a modern one. Rise of the Triad’s visuals are a slurry of the same general shapes and colours, meaning that in a game that promotes recklessness, speed and old-fashioned run-and-gun circle-strafing goofiness, there are still enemies who blur into the background and floor – and you will be looking down and up at enemies quite a bit. 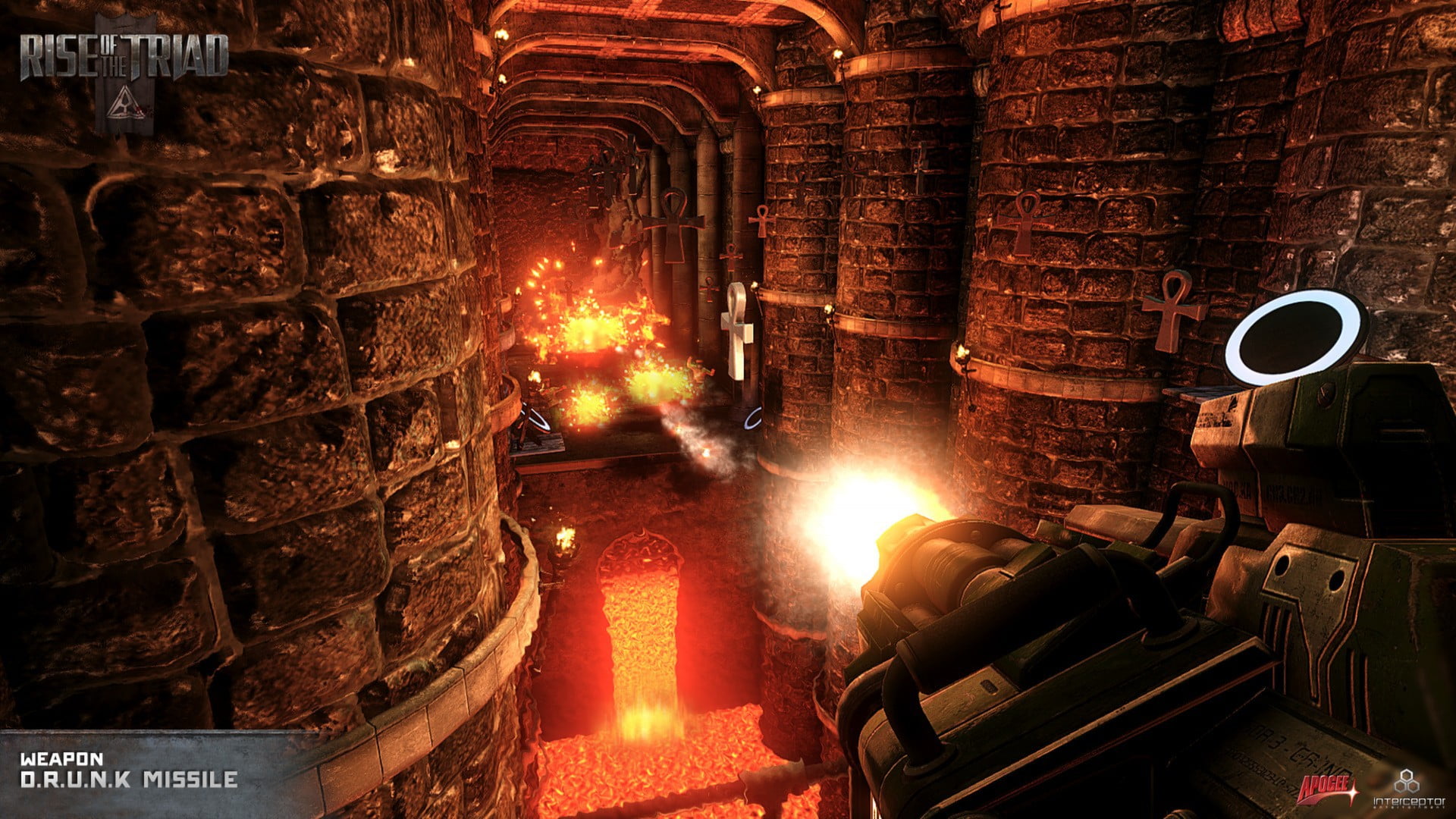 I thought at first this was because Rise of the Triad had untextured floors – just vast expanses of gray, ala the Wolfenstein 3D baseline, but turns out no, they just didn’t texture the walls and characters so similarly.

Anyway, this is a minor complaint in a game that is, itself, a minor complaint. It’s a good shooter, it’s got plenty of levels and secrets and it’s fun. I just don’t expect it’ll be anyone’s favourite game any time soon. It scratches a really specific itch, for those of us who wanted fast-moving first-person shooting game, but don’t want to give up modern user access concerns like quicksaves or rudimentary tutorials. It’s not going to be incarnate the great experience of that era of games as perfectly as it’d have to to be truly great, and I don’t think there really is any way for a game to do that.

I feel it’s a waste of time to mention but content warning for really excessive gorey violence, and not-so-obvious content warnings for not-really drugs, deliberate dizziness inducement. You can get Rise of the Triad on Steam and GoG.