Hey, Wizards Employees! There’s a custom card in this post! It’s just a bunch of existing keywords on a blank field! I think this one is safe for you to look at, but just in case, now you know!

One thing you learn about when you make card games – make them and print them and teach people how to deal with them – is that text size and text closeness is a big deal, and it’s a big deal that it’s very easy to not understand. Kerning and margins are my personal bane; you at first become stunned by how much space you have on a card for readable text, then discover how much of that text becomes unreadable when it’s crowded.

But okay, this is about Magic cards and we all have computer programs that handle our margins and spacing for us, and we’re not in a position to redefine the template (easily), so how one should design a card face is meaningless. We have that confine.

Why do I bring up card word counts? Three basic reasons, which I’ll also summarise at the end for those of you who scroll down:

Okay, let’s talk about what I mean by ‘too many words,’ before going on to why that’s bad. First, the Animate Dead threshold.

My go-to example of a wordy card is [[Animate Dead]]. Animate Dead is not the wordiest card, but it’s a card we’ve seen printed in three different frames, and it’s pretty obvious whenever anyone looks at it that the card is extremely complicated. There are some cards with more words on them, but this is a good example of a card where the words have become too crowded: 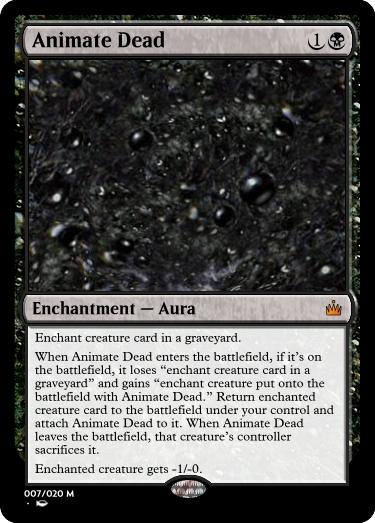 Animate Dead is an important example because it’s an attempt to make modern magic rules, which are very programmatic, work with a card that was designed back when cards could make sense generally and it didn’t matter if it didn’t make sense with the specifics of the rules. It’s a legacy card – it has to look like this in order to work for the way it works to, as much as possible, mirror the way it used to work back when the card was printed.

Now, if you got handed this garglemess, you could make choices about how to word this card differently, maybe make the card an instant or a sorcery or change the weakness of the spell animating the dead, the point is, you can take this in other directions, if you can change the way the card’s meant to work. This card is too busy compared to how Magic: The Gathering cards get printed now. You can check out this article explaining the history of how the card got changed in various iterations.

Now, part of what makes this card so long-winded isn’t just a hard word count. It’s also that the words are in some cases ‘long’ words – it mentions battlefield four times, enchant five times, and Animate Dead gets mentioned four times. There’s a lot of redundancy there to make this card behave right.

It’s not that strict word count is a problem. This card has ten words on it and they’re in squint-size. 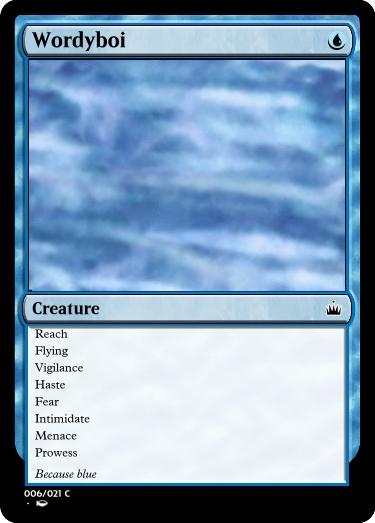 One of the all-purpose problems with this is flavour text. If you’re not familiar with the spacing here, there’s a difference between a new line in a paragraph, and the space between paragraphs, which is a bit bigger. These are known as line breaks and paragraph breaks. Flavour text is another gap bigger than a normal paragraph break, and if you’re using the Dominaria-onward template, the gap is bigger still to accommodate the small line between the flavour and non-flavour writing. This means flavour text takes up a lot more space than you might think, forcing all the other words to pack in into a tighter space.

Another problem can be when you change card faces. The old card faces, and a number of promo cards, all have different amounts of text space.Here’s a solid example between the old card [[Undead Gladiator]], in both its Onslaught and Masters 25 printings. 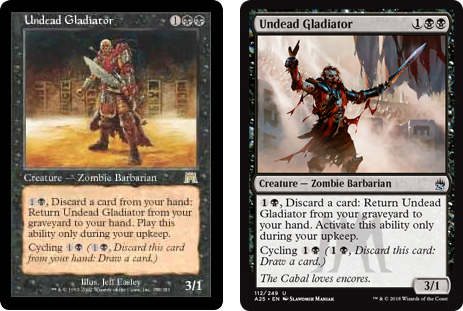 The wording is a little different, but not very: You lose the three words ‘from your hand’ in the reminder text and main text, but notice how wide the text box is, and how tall it is. The text starts at almost the same spot, the power/toughness numbers are almost level and in the same spot, but there’s space for a whole extra line of text down underneath it. There’s enough room for the flavour text.

Promotional cards tend to have bigger picture windows, which they use by making the text box smaller, and in some cases transparent. They can often smuggle card space onto promotional faces, but that’s part of why promotional cards often don’t have any reminder text. Check out Animate Dead on a promotional card face. 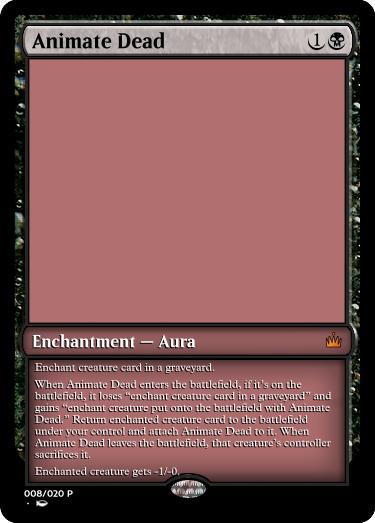 Notice how very small that wording is?

This is just basic logistics: Too many words makes cards hard to read. This can be a problem because you gotta remember Magic cards are doing a lot.

Putting a lot of words on your card makes those words smaller, and smaller words are harder to read. We can all accept that there is a simple fact that you can put too many words on a card. After all, if you put the whole John Galt Speech on it – and no, I’m not going to show you that, it crashes MSE and ruins the file to do that – it’s all too small to read. Where we all are going to adjust is around just how many words are too many words. It’s pretty simple to see that as these cards get more words, the text gets smaller, and that smallness makes the cards hard to read.

I personally think that when words get Animate-Dead small, they’re definitely too small. So that’s one way I think that the Animate Dead word count is worth examining. That threshold is 67 words, and 441 characters. When I say ‘this card has as many words as Animate Dead’ it’s often a question of basic complexity; I often feel that custom designers are too inclined to make cards with too many abilities, or too complicated.

That brings me on to the next point: Cards with lots of words are often trying to do too much.

There are some situations where a card needs to jam a bunch of words on it. Look at [[Necropotence]]. That card wants to make you pay life to draw cards, but it wants to make that a meaningful choice; you pay life for cards, but you don’t get those cards until the end of your turn, which means going over 7 asks you to discard. To avoid fuelling Animate Dead strategies (hi again, Animate Dead), discarded cards got exiled. And you skip your draw step to make sure that Necropotence is a commitment.

These three abilities, by the way, can be done with less than half the letters of Animate Dead.

It’s not uncommon to see, especially Commander-style creatures, that have multiple abilities designed to make the card castable repeatedly, do something when it’s cast, and then be worth attacking with. Sometimes that’s worth doing, but if all three abilities could fill the text box, ask yourself if you’ve made one crammed, tight card that’s hard to remember and play with, or if you’ve got three cards bolted together.

And the third point, finding tight wording encourages tight design. When you can throw more words at a mechanic, you can make almost anything work. That’s actually what keywords do – you jam a bunch of text into the comprehensive rulebook, then make the text on the card just point to that comprehensive rulebook.

Now, I have a lot of beef with keywording in custom design. My personal belief is that you shouldn’t make a keyword unless you’re going to make at least three cards in ascending rarity (it works on a common, an uncommon, and a rare), or five cards across colours. And when we do that, you have to look at the keyword in terms of how many meaningfully different cards it represents. For a lot of combat keywords, for example, putting it on a 3/2 is not that different from putting it on a 2/1, or at least won’t make a card that feels particularly different.

That means if you can’t usefully keyword the card because you can’t really make a lot of interesting cards with it, you have to use the space you have, and make decisions about what makes the card the best thing for the purpose you have. Now, sometimes this can result in considerations like limited vs constructed application (compare [[Jadelight Ranger]], [[Merfolk Branchwalker]], and [[Tishana’s Wayfinder]]).

None of these are rules, per se. They aren’t things you have to get right or I’ll get mad at you. But I hope it explains why I point at word counts for cards; a very wordy card is often trying to do too many things at once, isn’t using its space well, and is hard to use. Word counts aren’t a hard rule, but they are absolutely a useful diagnostic heuristic.

This started as a post on a custom magic card subreddit.