You need to know two pieces in this story. The first to know is a guy called Dai Vernon. Dai Vernon was one of the Old Great Men of magic. The dude looked like Colonel Sanders or Mark Twain if their particular fields of interest was sleight of hand magic. A number of modern magicians now are people who were trained by or who were given the opportunity to learn at the tables of experts who were themeslves maybe lucky to have been taught by Dai Vernon.

Hm, okay, maybe not quite conveying it.

Dai Vernon was contemporary to, and famously fooled Houdini.

Typically, most magicians of his calibre are associated with single specific tricks, specific sleights, single particular performances and Vernon was famously responsible for the repopularisation of the historical trick known as the cup and balls, which now almost every sleight magician has their own version of and does. 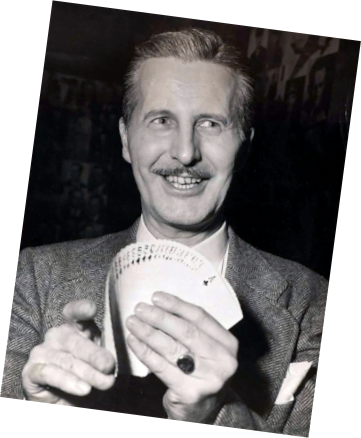 There’s a sort of pitfall that presents itself when you start trying to describe these people in terms of superlatives, because the nature of the magic community is fundamentally secretive and fractured. Odds are good that Dai Vernon was, in his lifetime, one of the most influential magicians, he was definitely one of the most respected, and it’s quite possible that he was one of the most well-known and high skilled magicians, but it’s very hard to know for sure if he was something you could call the best. Sometimes the best magicians of a type were never known in their lifetime, and we only found out how good they are based on notes that they left behind, in these obscure unpublished or under-distributed books.

Teller (one of the ‘probably the best’ living sleight magicians) is fond of a ball routine that’s based on the written work of a guy called David P Abbott, who wrote about magical routines he developed for small audiences in excruciating detail, and who, again, was a friend and contemporary of Harry Houdini, and who was largely obscured through his proximity. Ricky Jay related a story – a story from Dai Vernon! – about finding Alan Kennedy, a small town gambling cheat who could do a ‘centre deal’ which I wrote about last year. The craft of magic is in many cases being developed by people who even when they’re trying to document it are trying to make sure those documents aren’t easily found.

One of those names that Dai Vernon directly mentored was a guy who right now probably deserves the title of greatest living card expert, Richard Turner. Richard Turner is also one of those narratives that’s very easy to tell to, well, normies, because Richard Turner isn’t just one of the greatest card manipulators of all times, he’s also unsighted (Turner has expressed a dislike of the word blind and doesn’t consider himself disabled). And it’s not ‘a great old master of the form lost his sight but kept his skills’ it’s that Turner lost his vision as a child, from Scarlet Fever, and grew up and became a truly, impossibly skilled card manipulator.

Turner also resists the term ‘magician’ by the way – he prefers the term card mechanic. And Turner is absolutely phenomenal, it’s hard to understate just how amazing he is. Now, his amazingness is like I said, an easy narrative for normies, because he fits the archetype of Inspiringly Disabled, and he’s a black belt at karate, and the abled love the idea of a blind person? who is good at something? but how!? And Turner is fond of presenting a similar narrative; he’s very proud of how he worked so hard for what he does, and how he didn’t ‘let’ his lack of sight hinder him and anyone who doesn’t get as good as him at things he gets good at is as much to blame.

Like, I don’t feel great telling a guy with his vision that hey, you had it easier than you say, but what I will say is that Turner has also talked about how he’s got an eidetic memory and fantastically sensitive skin, which I mean, it may play a part in how he’s capable of feeling the edges of cards and identify them. Also, if you can practice the same task for ten hours a day for sixty years, that may be a byproduct of other elements of the self that maybe aren’t as generally distributed as ‘work hard.’

Dai Vernon taught Richard Turner a lot of stuff, when Turner was coming up in the magic world. What’s particularly important about that relationship is that Vernon knew what the sleights should look like, and had a technical enough knowledge to give Turner useful information about what to do based on how the cards were positioned, not based on what Vernon could see. Turner couldn’t see the tricks, so he couldn’t tell how they looked and he had to learn them by feel.

Eventually, Dai Vernon started telling Turner impossible sleights or arrangements of sleights. Without Dai’s side of the story, we don’t get to know what he was thinking, but Turner’s side of it is that Dai was trying to mess with him. Turner didn’t know he was being asked the impossible, and so, he did it.

He just… worked out a way to do it, and practiced it enough, and then he demonstrated it to Vernon. 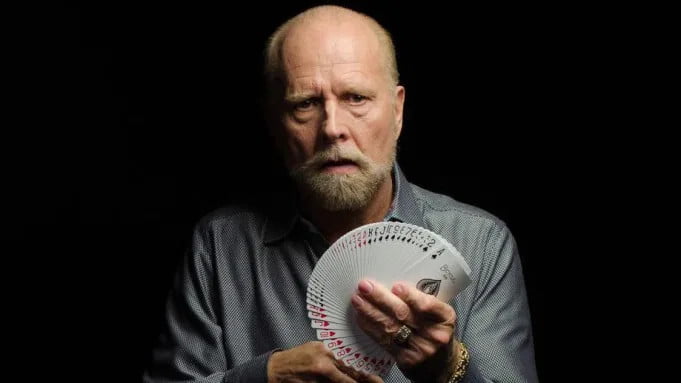 Now this is a story Turner likes to tell, and he relates it in Dealt. It’s a story he tells, I think, because it makes him look like a stone cold badass.

It also reminds me that man, Dai Vernon could be such an asshole.