Time to time I’ll talk about things in Dungeons and Dragons 3.5 about the fairness or brokenness of various things like I’m some kind of specialist scientist with a really niche interest and people around me are reasonably familiar with what I’m talking about but don’t actually understand the magnitude of what I’m talking about. It is, I imagine, the kind of blank look that civic engineers get when they start describing ‘tolerances’ to city planners, or a nuclear physicist trying to explain control rods to a Wendy’s drive-through, just with stakes that are infinitely lower.

Here’s a thing, then, that’s just there, in the rules, and it’s really powerful and it’s silly and it’s invisible. It’s invisible because it relies on a dice roll and the game rules work at it, and the rules as written just seem to stop, like someone didn’t consider that anyone might actually use this ability.

Clerics could get domains. These were things that’d make your character feel more different, more distinct from anyone else. Hypothetically, this meant that a cleric of Time and Elf would look different to a cleric of Fire and Law, except what usually that meant is you got a lot of clerics of Luck and Time and Elf and Glory, and if the player was just a well-meaning scrub attracted to some good looking keywords, maybe even Strength.

Anyway, mixed in amongst this there were the innocuous-seeming Fire, Water, Earth and Air domaints, which gave you the ability to, as in th example of the Water Domain: Turn or destroy fire creatures as a good cleric turns undead. Rebuke, command, or bolster water creatures as an evil cleric rebukes undead. And that sentence sat in the player’s handbook like a god damn rat trap.

Because what does that mean? What does a ‘water’ creature mean. Well, a water creature is any creature with the water subtype. Which obviously means things like a water elemental, and that’s not such a big deal, right? Those creatures tended to be kinda basic; single special ability, a bunch of immunities that won’t protect them from much, but they would come along and maybe a cleric could have a fun time with their new pet. No problem, right?

Here’s the thing: The rules don’t put a duration on controlling undead. Controlled undead, in all the situations you see them, operate at the order of their controller, but act on their own initiatives. And that’s something you have to dig for: A player character with controlled undead will generally be allowed to boss them around freely because 3.5 was not a place that had a good handle on what we call ‘an action economy.’ Okay, so a Commanded elemental creature is great because it’s free actions, right? That’s a problem right there.

The other thing is, though, ‘water’ type creatures aren’t just ‘things made of water.’ It’s a whole galaxy of critters that have the Water subtype. And that means that suddenly the entire Monster manual opens up, and it doesn’t specify nonintelligent water creatures and that takes, if you start from the top down, into the home of the dragons. 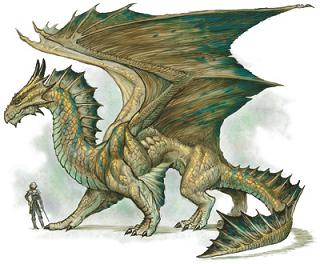 You get a lot of bang for your buck out of a dragon. A level 5 cleric can command, with a reasonably good roll, 9 hit dice of Dragon, or a Medium Bronze dragon, which has six attacks at +11, an AC of 18, 76 hit points and a breath weapon. A level 8 cleric with a pair of baby bronze dragons flapping around them would be a cute thing to see, and in terms of sheer bulk you can put on the battlefield, it’s pretty stunning – a level 8 cleric is looking at having something like 45 HP, and those dragons would have the same, so this one class feature with a good roll can triple the amount of meat you put on the table.

Did I ever see anyone do this? No.

Nobody bothered. I mean, clerics were broken enough without it.

You could ignore a class feature that let you control dragons because… eh.

You had better stuff to do with your time.

I always wanted to give it a shot, and make a character who used it to have a water dragon girlfriend that followed them around? But any DM would look at it, despite the way the rules said it worked, assume it didn’t really do that, and then the whole idea got vetoed. Which really, it should.

And this is just one feature of one domain from one class that’s so broken it can ignore this.