Do you have any idea how hard it is to write about games and smooches.

The theme of smooch month in movies gets me watching stuff I’d never touch otherwise, and occasionally finding gems (honest, there’s positive reviews coming). But for games, it’s a desert. Oh, there’s a whole genre of games which are ‘about’ smooching – you have lots of romantic phone games, lots of gacha romance games, and a wealth of romantic novels, but finding any given one of them to write about is needle-in-a-stack-of-needles hard, not to mention often extremely thin for a critical surface. I know I don’t like most of these games, finding ones that differentiate themselves is hard enough and then sometimes, when I find one that sets itself apart somehow, it still upsets me.

I took it a step down and tried to write about games of a different genre where romance is important and you know what, that’s super hard too! Lots of games have a romantic element where you’re seeking to rescue or satisfy some lover or romantic partner, but that is almost all it seems being written by dudes with issues! I went back to look into adventure games from the 90s in the hopes of finding something with even an engaging romance subplot, and boy howdy,  I was reminded that Space Quest was not an exception.

There is something to be said about Kings Quest, but even those romances are fairytale style, and therefore kiiinda spring up out of nowhere once you get the two destined characters in the same room.

Then when I went looking for games that detailed the course of a romance through the game play and wow those are thin on the ground in my space, too! I could find more games about rescuing a dog than I could find about working with a partner!

And that’s why I came back to this classic rhythm game, OSU! TATAKAE! OUENDAN! 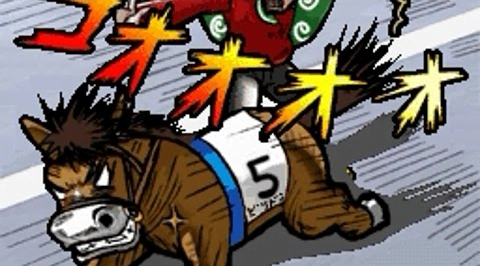 Ouendan is a game whose name you don’t have to shout but come on, you should want to, you should be shouting in your heart, that was the original progenitor of a game you might have heard of called Elite Beat Agents. It’s a rhythm game on the NDS and 3DS, where you tap the screen in time and place to correspond with the flow and movemen tof the music, and that’s kind of it. If you know what a rhythm game is, you probably can work out how to play Ouendan in just a few minutes, even across the language barrier for non-Japanese speakrs.

In fact, it was that accessibility in part that led to the game being picked up in the west, and enjoyed so much we got a American localised version of the same game, Elite Beat Agents. This was in fact so much of a thing that at the end of the credits for Ouendan 2, there’s a thank you note in English.

That approachability is only part of the reason why you can play Ouendan without literacy, though; another element is that the NDS doesn’t have region locking, so you can just buy a Japanese copy, jam it in your Belgian NDS (I assume you have one of those) and it’s going to work, rather than requiring you to pay distributors in your country. And then, the thing that pushed this game from a good, solid game to an absolutely amazing game is the framing device of the narrative.

In Ouendan, you play a squad of cheerleaders roaming around town (and history) finding people who need help, then cheering them on to do their best, and what you get in this is a collection of tropetastic preposterousness that scales from ‘helping a kid with their college entrance exams’ and ‘getting a noodle shop guy to get over his problem with a stray cat,’ to ‘helping cleopatra build the pyramids’ or ‘bringing back the dead,’ finally culminating in ‘saving the world from a asteroid strike through the power of rock and roll.’

What’s important about this, though, is that in each of these stories, you aren’t playing the people who the story is about.

One of the stories that you help out with is a story in a festival, where a dude is being blocked from dating a girl he likes by her crappy dad. The dad is willing to let him ask his daughter to marry him, if the dude can win a race against him during the festival. If you win the level, he succeeds, and they get to get married. Not only do they get married, their kid shows up in the sequel game.

Now I pulled deep to find this game because I think this successfully breaks a lot of my problems with videogame romances. First, you don’t control the agents in the romance; you’re not the boy or the girl, and your relationship to the other has nothing to do with how well you play the game. These two characters are into each other, and their reactions to how well you play is how well you get them towards a goal they both want (where they want to get married). You want to do well, because you want them to have their chance to get married (and you get a rewarding tish sound).

It’s a sweet story, it’s about something nice, and in amongst all these games I’ve been digging through to find just a romance that didn’t make me clutch my insides, the worst thing about this one is that the story written fifteen years ago still does the ‘dad won’t let couple marry because he has some sense of ownership over the daughter,’ which is a total asshole thing, but he’s presented as being a dick for it.

Incidentally, I did consider doing this with Elite Beat Agents instead, because, you know, it’s slightly more available and didn’t get a sequel. Thing is, it’s uh, it’s not got a story like this one in it. The closest we get to this song is Queen’s I Was Born To Love You, which shows us Leonardo Da Vinci harrassing Mona Lisa until she agrees to pose for him as a model, which is so much worse as a story.

Ouendan! It’s great, go check it out, oh my god videogames are bad at love.