I haven’t tried to hammer these Jimmy Buffett albums around the themes of the months as they come up. They’re just going to happen as they happen and things can move and adjust around them, whatever.

Still, this is an album with a bit of a theme that fits the mangled, strange ways I wound up approaching romance, and thankfully, I like to think it did some good, following on the heels of Come Monday from earlier.

When I first found Havana Daydreamin’ it was a busted, tan coloured tape that had been living in dad’s car, a place I didn’t spend any time hanging around until later in my life when I wanted to hide from the evening of loneliness that was church. I was cleaning dad’s car for a dollar, and I found this, in his tape collection. For that reason it’s always felt older to me, like this is somehow primal Jimmy, that this is Jimmy Buffett from before all the other, ‘better’ songs I knew. 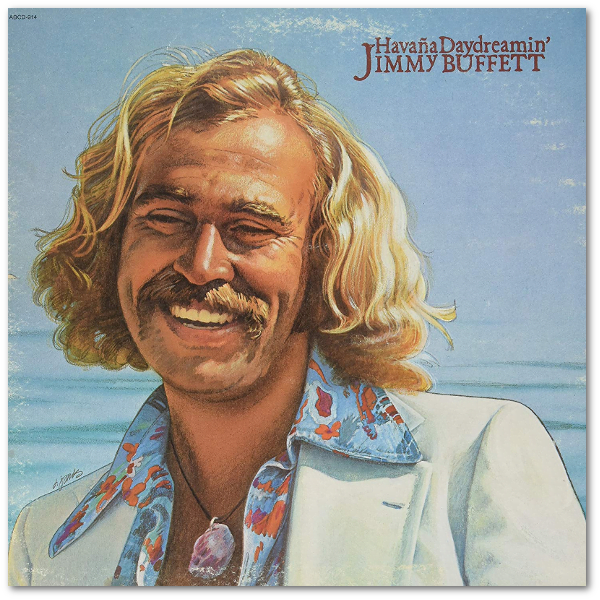 The elephant in the room of this album is The Captain and the Kid, a song Jimmy Buffett ostensibly wrote about his grandfather, a sea captain who talked to him and helped him grow up and taught him things and then, as people are want to do, died. Remember that at this point I’m a cultist, I think that people who die are going to hell if they’re not going to basically our church, and so the mourning sadness of this man missing his grandfather stabbed me.

The song is great. It’s sad and it’s serious and it’s that Jimmy Buffet nostalgia turned to a deeper kind of sadness than just ‘hey, things from when I was a kid are gone.’ It’s beautiful and it made me reflect on how my grandfathers both died before I was born. I remembered actually resenting my life for that – that maybe if there were other men in my life than my father maybe I could learn useful things, maybe I could feel less afraid all the time.

There’s some real tour music, too – Kick it in Second Wind is an absolute coke binge of a song, This Motel Room and Big Rig are all just life-on-the-road story songs, and they’re fine. I actually ran a motel for a while and I remember always hearing This Motel Room as I went about my job, that and Vacancy by Harry Chapin. Which, uh, that song is also great, in a different way.

There are a few more story songs here than I normally expect out of Jimmy Buffett albums. You have songs like Woman Goin’ Crazy on Caroline Street, Havana Daydreamin’, Cliches, and Something So Feminine About A Mandolin and they’re all pretty good, salted with varying degrees of the Jimmy Buffett template of lots of alcohol and or drugs. Of them, I do prefer Cliches, which tells the story of two people who are definitely a pair of kombi-van hippies and how they’re happy and having fun with their lives anyway. What I love about this song I think, these days, is how it’s so incredibly of its time. The couple in this song are now absolutely a pair of stoner grandparents who never officially got married and still live in that trailer.

That’s the thing that I think stuck with me the most about this. There are some people here who aren’t very original. They’re not very remarkable. But they’re together and they like one another and they didn’t need their love to be agonising or astounding. They’re just happy.

Is there anything on this album to compare to He Went to Paris or West Nashville Grand Ballroom Gown? No. But it’s a fun album full of low-key crime and a lot more drugs and fun than A-1-A and it’s got a lot more energy when it bothers to wake up.