First things first you’re going to need to know what ASMR is before I keep going. It’s a hard-to-explain thing, so let’s go with an arch, academic-sounding definition then get fuzzier. ASMR, standing for Autonomous Sensory Meridian Response, is an experience characterised by tingly feelings across the skin, alike to static electricity, often running down from the top of the scalp down to the back of the neck, which seems to be experienced by a non-majority population of the world.

It is hard to study because it’s a thing people may not even realise they do experience, it’s an individualised experience, and there aren’t clear, hard predictive triggers. Some people get it from a few things, some get it from a lot, and some people may never discover that they’re affected by it. It is not necessarily sexual – despite the title of this post – but for some people it is.

ASMR culture on youtube is therefore a grouping of channels, often with odd titles which seek to promote to you different and sometimes blisteringly specific scenarios, containing things like ‘tapping’ ‘squish sounds’ ‘no talking’ ‘personal attention’ and the like.

I’ve been thinking about this XKCD strip:

And I’ve been thinking about it in light of ASMR.

The idea of the comic is pretty funny but it’s also pretty easily grasped. Things we experience in our developing lives impress upon us in odd ways. Rather than being overly invested in the pornography itself, the narrator is impressed upon by the medium of the comic. There’s always, with XKCD, a sort of boring futurism where the audience tend to make every comic self-fulfilling. You’ll find people holding [Citation Needed] signs at rallies, for example, and there were people saying they were sure that this person really existed and reflected a real experience.

ASMR videos are often made with sensitive audio equipment that capture a lot of noise and create the impression of existing in a space, and do their best to create a blanket of white noise. I have some very nice headphones (a gift from a friend) and this means that when I’m listening to an ASMR video, I can often hear things that the track isn’t really meant to have – the sound of birds far away, or the sound of a siren many blocks away. Things you have to really strain to hear. 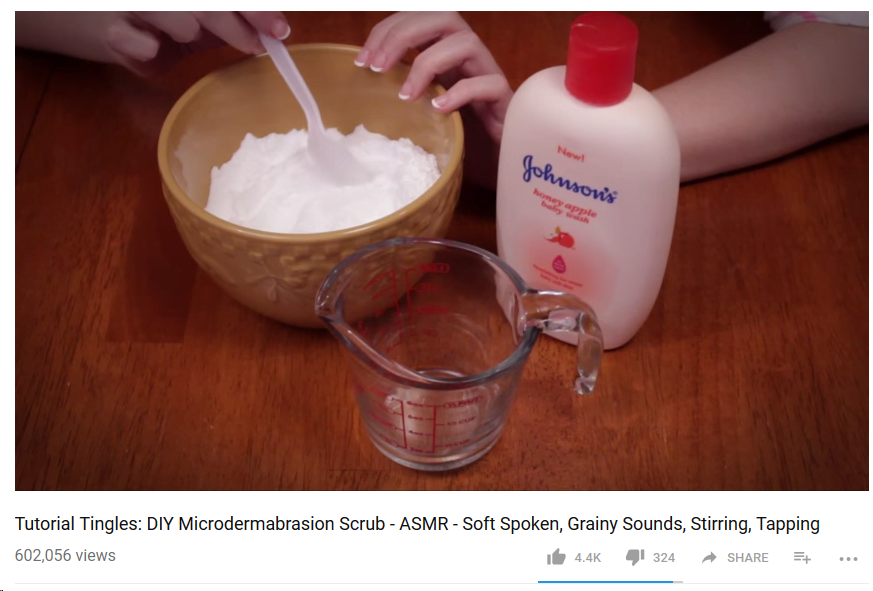 In addition, I have some experience editing audio. One thing you want to avoid in audio is around the English letter sound p and to a lesser extent, b. These sounds carry a burst of air, which means that they for a tiny moment increase the volume of spoken audio, known as a pop. There’s a whole host of equipment designed to help you minimise these effects, and radio voice – the practice of speaking to recording devices – tends to have non-severe P sounds. They are, when you hear them in professional audio recording, basically an error. Software can get them out, hardware can prevent them happening, you should probably never hear pops on audio tracks.

ASMR videos are full of pops.

ASMR videos are often built out of experiences of intimacy and comfort from points in our youth. Things like being the focus of attention for a non-failable test, hairdresser visits, hearing exams, having your makeup done – lots of different scenarios. The super-sensitive audio devices pick up the pops and the pops seem to be things the audience respond to. It might be because it reminds people of old audio software, but it also might be because feeling someone draw a breath, or hearing someone pop when they say a word creates the same illusion of experience as you get when someone is whispering in your ear. Even moreso, starter videos tend to have fewer pops, but as people get more familiar, they pop more, because audiences respond well to the sound.

The overlap of an error in audio recording (in most situations) with an intended affect (in a highly specific situation) comes back to the XKCD strip. The idea at its root, that we can fall in love with things that are themselves limits of technology.