Lorwyn is a wonderful world, and an almost wonderful set. It wasn’t a set well-designed for its high-profile purposes; the draft environment was so catastrophically complex and often so debilitatingly lopsided, where someone would wind up with three lords to your no lords and you’d lose games based on your board being overloaded.

There was a certain awkwardness to making tribal decks in Lorwyn, too! Because the environment was full of cards of a type, but the best cards of each type were pretty similar. There were only so many good soldiers, so many good kithkin. You could try and overlap on your synergies, but even then you just got these very dense decks full of Dorks that Attacked.

What’s more, the Spells – you know, those things That Make Game States interesting – were all a bit weak in Lorwyn block, attached as they were to the Clash mechanic.

I’m also sad about how Lorwyn introduced the Tribal supertype, which is an unsupported type, now. It’s sad because while the rationale for Wizards to never do it again is strong, it means that the only Changeling or Tribal cards we ever see are the ones we got. Sure, for Nameless Inversion, that’s great, a solid card, but Blades of Velis Veil just isn’t in the same league. I love little effects like that, small corner case cards that are useful to a whole variety of decks you might want something like it in later building.

There were a lot of cards in Lorwyn block that I played with. I remember being randomly contacted by one infamous Cat-Gonk about a deck I was playing around this time, seeing me rampaging around with a deck that ran on Flamekin Bladewhirl. I’ve used Rage of the Titans in a lot of big-mana decks that want a Fireball effect and maybe clashes the card back. Clash was pretty good for red as a Minimally Effective Scry when we weren’t expecting to see Scry again.

There are some casual allstars in Lorwyn. Rings of Brighthearth, Rootgrapple, and Wild Ricochet are all cards that couldn’t quite get there in competitive constructed but made most good casual decks that wanted them quite a bit better. There’s also the Evoke trilogy of Shriekmaw, Mulldrifter, and Ingot Chewer, who are also all properly great utility effects that you might run anyway and late-game can turn into a useful creature. The first cycle of Planeswalkers happened here, too, with their slightly wonky sets of effects (sorry, Ajani). There’s the cycle of Commands, and if we’re talking about a card that’s always worth keeping in your toolkit, of course I’m going to talk about- 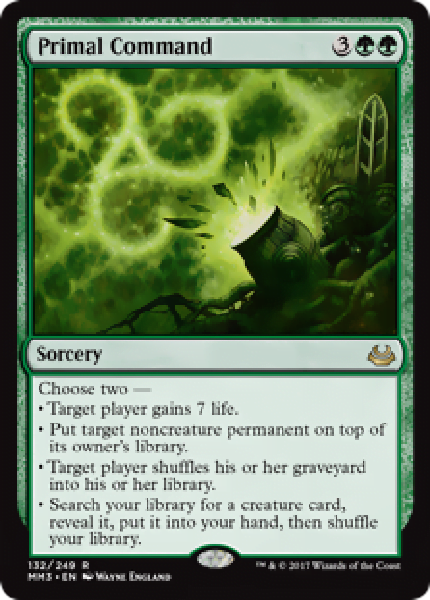 Primal Command is a toolbox, but it’s also a big, sluggish haymaker of a spell. Seven life and the creature you need the most is often a kind of anti-timewalk; you give your opponent a turn, but you make it so that turn probably didn’t matter, and you’re going to untap into an amazing turn. It can be an all-purpose Rootgrapple effect – whatever that is, it goes away. It can even be a restock and resurrection effect; get a creature out of your graveyard, put it in your library, then get it out of your library!

I love the kind of decks that can use Primal Command.

Morningtide brought with it some more long-lasting near-modern toolkit cards. There are a bunch that are just pretty good and can usually find a home, and some build-around stars. I don’t tend to lean on build-around cards though, or cards like Gilt-Leaf Archdruid and Obsidian Battleaxe would get more attention in this list. Though by all means, check those out – the Battleaxe is a colourless Fires of Yavimaya that can slot into white and black decks pretty nicely these days. There’s also a lot of cards that request a deck around them – you’re really not going to put Stenchskipper in almost any actual modern looking goblin deck, but the reward for it seems pretty good. There’s more Evoke cards too, and I almost put Reach of Branches here as a really excellent option for a slow, grindy control deck. Making land drops into threats, even big and slow threats, is a super good tool to have.

Instead, here’s a card I’ve used lots since I got it. 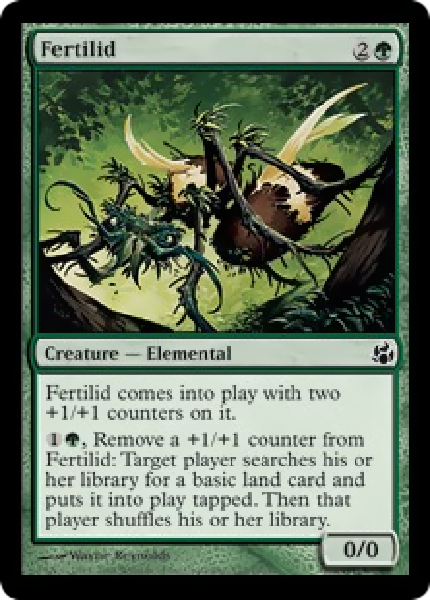 I’ve always been fascinated by a tidy curve for mana expansion. Fertilid can come out on turn two (with a turn one assist), and turn three, block then get two lands before it dies, meaning your untap on four with seven mana, which is pretty useful. It also works with a host of other green effects.

Putting more counters on Fertilid lets you use it to thin lands, which means it works with other mechanics like the Abzan and Dromoka cards, Graft cards, Simic evolve cards and moving the counters around, cards that check the power of creatures from your library or graveyard, cards like Doubling Season and Primal Vigor, and all of this is secondary to the fact it’s also just a decent grey ogre that can always trade in for two cards.