Recent conversations about racism in D&D-

This isn’t going to be about that. That’s a pretty heavy thing. This is a light one.

Anyway, recent conversations about racism in D&D got me thinking about how rarely I saw the flavour text for Orcs and Drow. They’re there, in the monster manual, and if I ever bothered to crack it open to look for them, I imagined I’d see it.

If you bought the 3.5 and 3e D&D rulebooks, you found that all the content, including the gods, were drawn from an existing setting, and you could buy rulebooks that by default were built to respond to and take form that world – the world known as Greyhawk. I don’t know how they handled this for 5th edition, because as I keep repeating, I do not know anything about 5th edition and do not care to, but it makes sense.

At the point when 3rd Edition was being started, there  was twenty years of lore across multiple different worlds of Dungeons & Dragons, and that meant when the writers sat down to create monsters and gods and all the stuff that players and DMs needed that wasn’t explicitly maps for places to go and things to do, they wanted some kind of coherent mesh of bits. There were always going to be problems with that, though – I mean, do you think your setting needs Ghasts, Ghosts, Ghouls, Allips, Bodaks, Liches, Skeletons, Wights and Zombies? Well, if you can have all of those things, then you’re kind of communicating a tone of how much room there is to be undead, and all.

Setting lets writers get a handle on things, and gives you a default for the creatures you’re presenting. It created this weird kind of waterfall effect where some content – and let’s face it, usually monsters, because you can belt out a pantheon in a page with the way D&D handles issues of spirituality and religion – wound up showing up in sourcebooks because writers made them and they were sitting around, but this then meant that you had things like Tieflings in the monster manual (humans with a bit of demon), so they were default to the world, but orcs and elves only had those demony-bits in the Forgotten Realms (Fey-ri and Tannaruk if you look ’em up). And it takes no effort, almost invisible effort from the GM, when asked ‘hey, do these orcs have Tieflings’ to go – ‘oh yeah, sure, they’re from that book, I think,’ and be okay with weaving the world together, the segregation of books and settings can result in strange things… like the aforementioned undead redundancy. 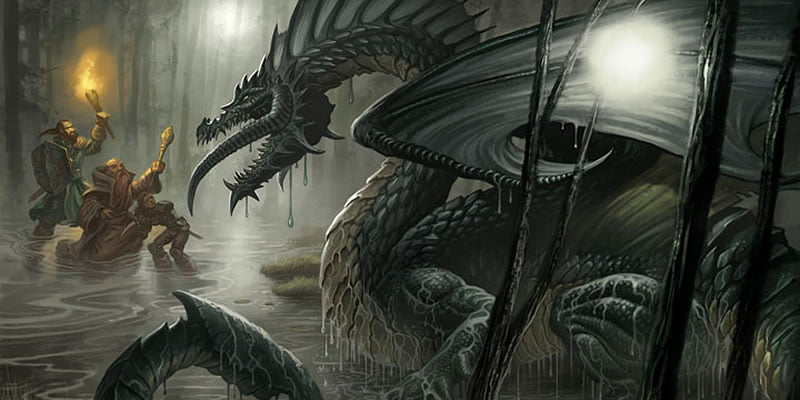 4e ‘didn’t have one.’ I say didn’t have one because it absolutely did, but it was a setting designed to make it explicit what the setting didn’t have. The notion at the time was that by supplying minimal information, players could focus instead on their own little small spaces and their own first adventures, the first level vision of the world. You can slap down a village, give player characters some sticks and let them go out and attack the nearby (rolls dice) orc raiding party that keeps attacking their home.

It was designed to be a minimal setting, and in so doing, it became a setting of its own, a setting that wound up with the nickname points of light.

I kind of love it.

I kind of love it because the setting as it exists is definitionally a setting where you don’t need to know what’s two towns over. It’s a setting where the journey to the next town is a mystery, where the gods are made up of small handfuls of stories, and adventurers are extremely rare and regarded as extremely weird.

It is, in a way, the darkest, most gothic, most horrific setting of D&D you’ll find in as small a space! Oh, Ravenloft is full of horrors, and it can give you explicit lines about what happens in the horrific places, and the skeleton that fires nazi bees out of its mouth and all that, but Ravenloft is a world structurally created by magical nonsense and maintained to be a hellish series of nasty short stories. The Points Of Light setting is horrifying because travelling one town over is too dangerous for most people to try! There’s nothing stopping the demonic cults, no orders or regulations and barely anything that you’d consider a kingdom.

It’s interesting because as you level up, the spooky chunks of the wilds, the fear in between towns begins to become less fearful… right?

What you do with Points of Light is interesting. It’s meant to be a scaffold you can start jamming countries and places and modules into and the fact that players have never heard of a town that wasn’t there in last week’s session is diegetically reasonable. But it can also be an eternally near-apocalyptic realm of terror and darkness where whole dragons can emerge from the swamp

And you’ll never realise they were there.