Why not, White Wizard have a kickstarter going right now. 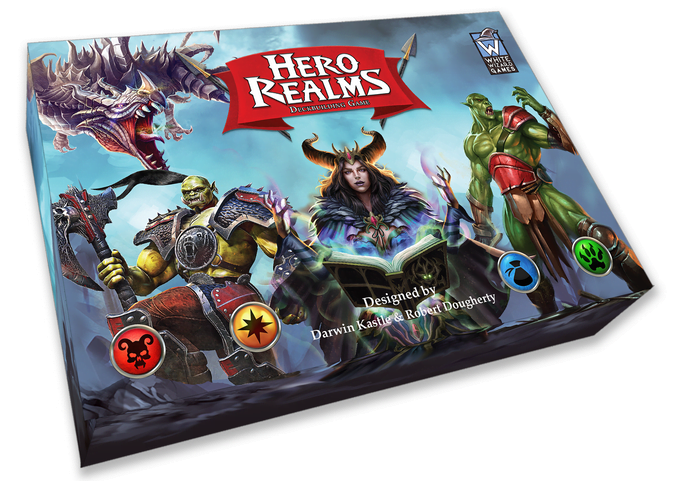 I feel that I’ve actually mined the well of Star Realms pretty deep; it’s a game that inspired me to try and make similar games of my own, and I’ve written about the base game and the Frontiers expansion, which introduces a cooperative module for the game. I feel that commenting on every one of the booster-sized expansions for Star Realms is a bit low-effort for the blog and since I will mostly just be saying ‘hey, this is pretty decent, here’s why you might like it’ it seems like it’s not worth doing quite the same way.

What stuns me, though, is how Hero Realms feels bad compared to Star Realms. 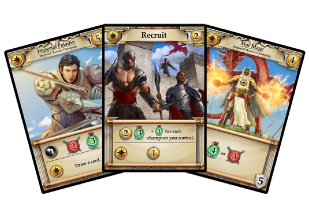 The Realms games – Cthulhu Realms, Star Realms, and Hero Realms – are deck-building games with a randomised marketplace. In the base game, the starting deck is always the same, a small stack of generic, boring workhorse cards that force variance into your play pattern, and you buy cards out of a randomised marketplace. Cards have types, and those types both give you a reliable set of similar mechanics (you know, like a colour pie), and then those cards reward you for playing them alongside other cards of their type.

Cards can be played for one turn, then thrown out, or played onto the battlefield as a sort of permanent effect that your opponents can get rid of by attacking it on their turn. It’s a simple system, and not one without problems. Because player’s turns are non-interactive, when you’re doing okay, you do okay in a great big pile of moves and then your opponent is dead – it can be somewhat of a grand finale, but it doesn’t feel good to have the other player pull of a chain of cards and kill you by forty points. There’s not a lot of counterplay is what I’m saying.

Anyway, Star Realms is amazing. In that game, most of the cards represent ships moving through your space, and your ‘life total’ as it were is your authority, your ability to exert control in the sector of space you’re fighting over. It’s demonstrations of strength, and you get attacked when your infrastructure and your fundamental presence is under attack. This means that big ships from someone else’s command are swanning through your space, it damages your authority without even necessarily being about seeing you personally shot by lasers.

The permanent cards are bases – space stations, asteroids, planet ports, all those kinds of great science fiction location. Some of them are positioned at the edges of your space and must be dealt with to reach your command centres – so they’re outposts, and any attack made on you has to destroy your outposts first.

In Hero Realms, the core of each deck isn’t an organisation with variably available entities, but is instead meant to represent a specific character, a person, and that person is meant to be doing things. Instead of impersonal bases at a big scale with lots of distance between them, the bases are people, heroes and monsters and other adventurers. This can create the momentarily exciting thing where you can be a brand spanky new adventurer who thanks to an occasionally good draw, winds up with a pet dragon on the battlefield telling everyone who wants to attack you to piss off, but it means the rest of the cards become less cards representing things and instead cards representing actions.

This creates weirdness, especially because part of the point of the deck building mechanism is to create the impression of things that are unreliably available. In Hero Realms there’s something of an attempt to adjust that – players always have a certain number of cards available, a pair of abilities that sort of sit to the side, ready to be used – but it also means that your character building isn’t a choice in the way that it would be normally. You may start out with a paladin who wears knightly gear and has a shield and a squire, but the marketplace pushes you to pick up green naturey cards and you’re punching people like a bear.

It also creates a language of development where the characters and techniques are made by random happenstance, and purchased through transaction. It’s a mismatch of theme and game – you’re buying new abilities with gold, and the abilities available to you aren’t really related to what you used to get there. Character development is not through acts of choice.

In Star Realms a strategy I wind up with pretty commonly is a big money strategy – you spend the early turns buying up every card that gives you 2-or-more currency, then your deck becomes this saturated pile of money, and then you buy every expensive thing you can find, synergies be damned, because lots of expensive cards like the Brain World or the Command Ship are just disgustingly strong, and don’t need to do anything but be big and dumb and expensive to be good. This strategy holds together in the context of Star Realms because you’re basically building an economy out of everything lucrative you can find, then spending that money quickly to hire every expensive mercenary force that passes through. In Hero Realms that strategy becomes the idea of someone who inexplicably has piles of money in their pocket that they do not always have access to, and who somehow knows the final moves of four types of kung fu, and also, is friends with a dragon or a demigod.

It’s a weird mess and it’s not something I’m happy about. 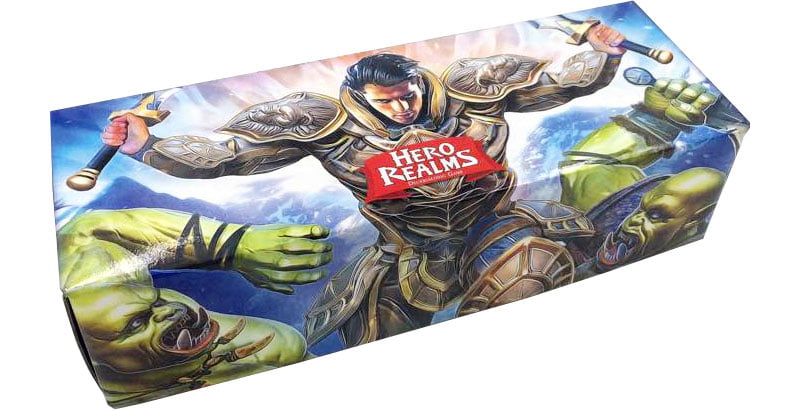 And this is before we talk about the Ruins of Thandar co-op expansion. Here’s your micro-review: The rules of Ruins of Thandar are so confusingly written we spent more time checking the rulebook to try and work out its vision of material space and players than we did buying cards. There’s a good idea in the co-op engine, but in the need to make this a game about people in a human-scaled space, the rules are dreadfully written.


I guess as a final point, this game does look nice, but it is also expressing a fantastically generic fantasy universe.

Look, on one level, Hero Realms is a really solid game. It’s easily as good as Star Realms when you look at it in a broad sense, and if you have to learn it from a human, it works pretty well. My reasons for disliking it compared to the smaller, tighter Star Realms are as much about how the theme and mechanics inform one another.

I just don’t like it, as much as I’ve tried to.