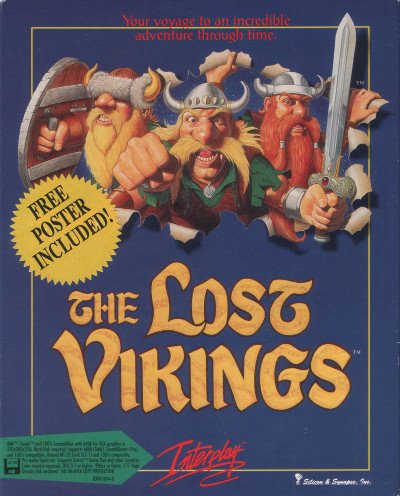 In 1993, Silicon Synapse, later renamed to Blizzard Entertainment released a puzzle platform videogame called The Lost Vikings, which did not attain particular critical acclaim but reached the benchmark of ‘kept the lights on’ at what was, at the time, a fledgeling game company.

The game was one of those twisted weirdo premises of videogames back in the early 90s, where the player controlled a trio of medieval-era vikings named Olaf, Eric, and Baelog, who were then kidnapped by aliens and asked to solve a series of puzzles to escape from their alien tormentors, in so doing diving through a series of semi-random portals to go to levels divided up by theme including an Egyptian-themed world, a swamp world, a toy world, a candy world, a future technology world, and so on. It culminates with defeating the villain and delivering to the ancient Vikings what they learned on their journey: Chiptune-rendered heavy metal.

The three characters each had unique abilities represented by a very simple set of two-button controls. Eric could jump and charge things, Baelog could use his sword and bow to fight and shoot buttons, and Olaf had a shield, which monsters would pointlessly assail themselves against and that he could hold over his head like a glider to guide himself down falls.

Going back and replaying The Lost Vikings recently, the #1 most interesting thing I realised about it was that this game had amazing level design. There was almost no point where you’d see a thing an lack a clear impression of what the things in the levels did. There was a lot of systems building on themselves.

There was a sequel, which was honestly a bit weak – and that’s been pretty much it, until their appearance in Heroes Of The Storm, Blizzard’s new moba.

So just think, if you’re 20 years old, and playing HotS: There are characters in that game older than you.