Let’s not talk about spoilers.

The premise of The Good Place is a pretty good one, a robust hook they serve at you in the first episode. We’re introduced to the character of Eleanor Shellstrop, as she comes to consciousness in an afterlife, which the story then underscores is not ‘Heaven.’ It is, to simplify, ‘The Good Place.’ The drama of the narrative comes then from her revealing, in private, to her first potential friend, that she isn’t the person they think she is, and that she doesn’t belong there.

That’s our basic premise, and it’s a strong hook. Rather than a whacky situation comedy, where there’s this good scenario and the story repeatedly dumps into this status quo a new strange setup, and the story refreshes around it, you get a really interesting story that’s also very funny that builds on the premise of the story established in this opening. It’s strongly continuity-driven, and that means that you aren’t really tuning in for an episode as much as you are tuning in for a few at a time.

It’s a good show to watch all of over the course of a weekend, that kinda thing. Good quality Netflix Content. 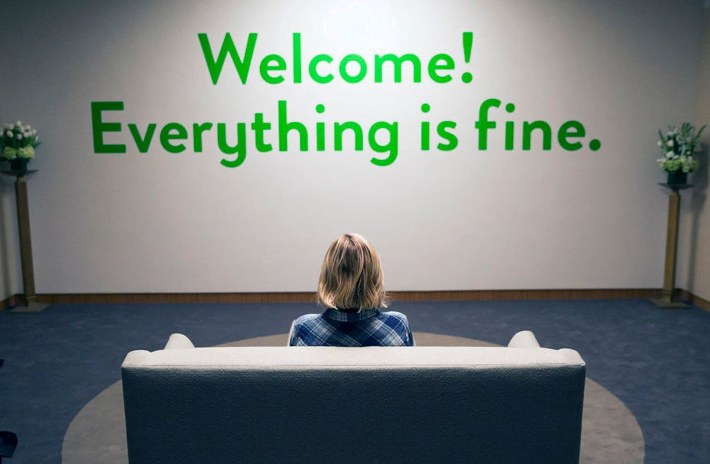 With that in mind then…

Why can’t you swear? 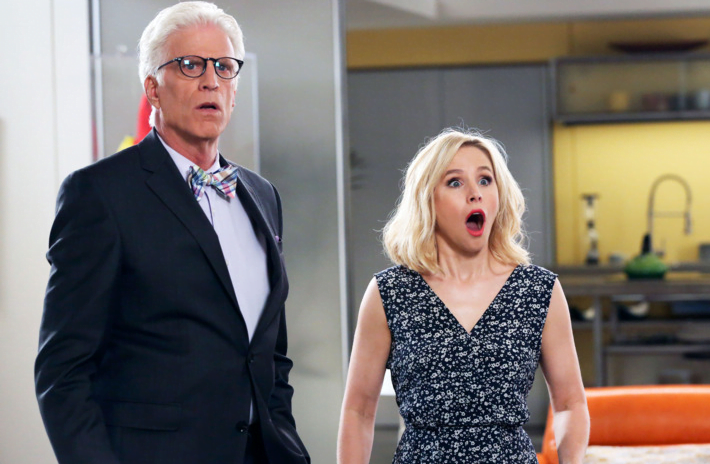 It’s a joke the series uses – and uses a lot – that whenever someone tries to say a swearword, they say a minced version of it – bench, fork, shirt and so on.

The moral framework makes sense to the people around them. It’s also shown as being peculiar.

It isn’t Heaven, it’s not beholden to the western Christian view of Heaven, even though it clearly draws a lot of its conceptual structure from the Christian view of Heaven. Not one from the Bible proper, but one from the common cutural view of Heaven – the idea that it’s a place where things are good, and you get to have fun, and don’t have to worry about things. In a lot of ways, the Good Place represents its reality as a world morally uncompromised by the problems of our mortal life. You can eat and drink and participate in the things of our day to day life, they’re just, you know, better. There’s a day-night cycle, there’s a food and drink, people have bodies and wear clothes. And we know people can have pleasure, because they have nice things to eat and taste, and also they have access to pornography.

The show doesn’t tie itself to a faith. It ties itself to a style of faith. It ties itself to western values, relatively heteronormative (but not necessarily), but it still has a value system, and that value system is familiar. You can ask yourself questions about who set the rules or where the rules diegetically come from, but that’s not really important to this question. The moral rules were set up to in a way we could understand them, make sense to us. They are hypocritical, but that’s also not important.

But swearing, even in private, isn’t okay. 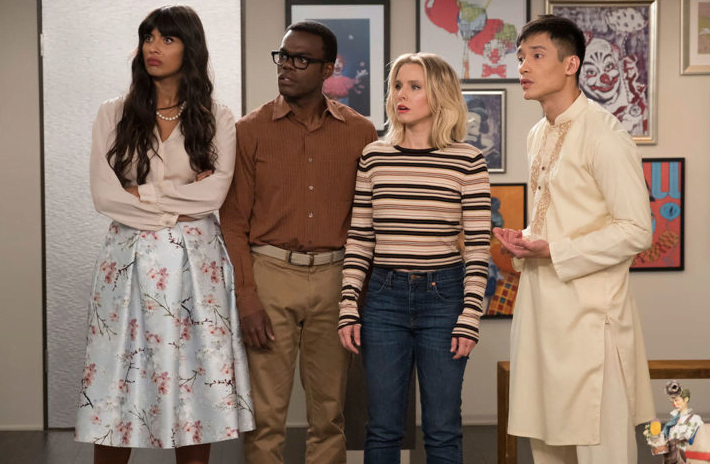 My suggestion is that the reason we see these things this way is that one of these is an imposition on the world. We see a lot of actions in terms of expressing or changing things. Speaking into a silence rather than observing. We see television watching as passive, ignoring that every minute we lend television is a choice, and we can end it at any time.

If you ever ask little kids to draw or diagram ‘looking at things’ they will often draw an eye with an arrow leaving the eye to point at things. If you look at classic cartoons where a character looks at things and a line of dots appears to show what they’ve noticed, they will come from the eye to the object, as if ‘vision’ is a thing that comes out of your eyes and goes into the things you look at. As we get older, we change this perspective, as we realise that things come into our eyes.

Remember this when the time comes to talk about TV shows: What you watch is not falling into your eyes. You’re choosing to keep watching. And when you make that choice you’re doing it for a reason, so it’s worth considering why.