It seems only fitting that with Game of Thrones finally spilled out and bleeding its guts on the floor of the greater media community, that I trot this take out that is simultaneously extremely uncomfortable and also right.

Dragons, in most fantasy fiction, are governments.

I’ve talked in the past about how fantasy isn’t about some actual historical place (indeed, no media is) but rather is about how we exist in our world, today and now. Werewolves are things like fear of the stranger, the owlbear is the threat of the unknown in the dark of the woods, witches are a fear of women, selkies are a fear of women, the gorgon is a fear of women and you know it’s possible a lot of our myths that have survived haven’t been very cool about women now I say it out loud. Still, with the idea of these monsters representing things that we can then create and ensoul as entitites that we can interact with, that we can talk to and maybe fight, that is, in most narrative, the job of the monster. 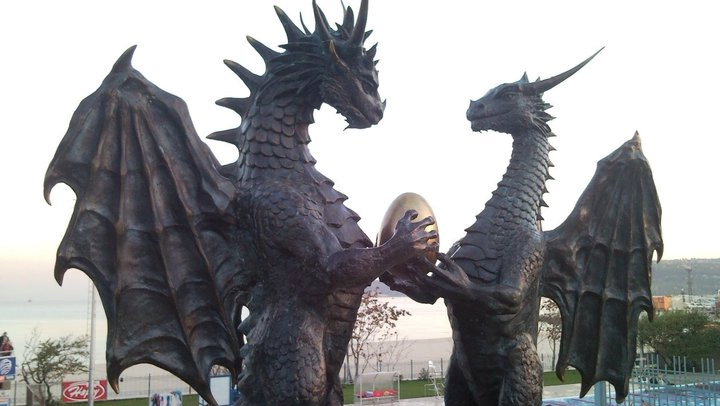 The Dragons in Love of Varna, Bulgaria

And the Dragon, as a monster, is big. Dragons aren’t just materially big, but they affect the world around them in a really big way. They change the way food is made where people give up some of their herds to the dragon. They change where people go and move, they make them move in groups or stick together, they make people set up highways and guards and build castles and keeps, and try to live their lives in the hope of avoiding the attention of the dragon. People don’t forget it’s there, and they are aware of its influence, and they know they do things just in case of it.

We even call them tyrants.

There are even things like kobold cults and draconic servants around some – people who exist to handle the management of things for the dragon’s whims! There are people who live in service of the dragon like beaurocrats and police and seneschals and they too, are referred to like creatures in a government.

Then you should look at the dragon in terms of who kills them. What your story can see as a way that a dragon dies. Does a dragon ever get beaten to death by all the oppressed peasants? No. It’s too big, too powerful. The actions of one ordinary person are too little. There is nothing one person can do, and a thousand nothings add up to nothing.

It’s interesting, almost like little anarchist cells, really. When I talked about the Tiefling as an avatar for the beneficiary of historical colonialism, there is a cousin to that idea; the notion of the dragonkin, the person-dragon, the dragon that cannot rule – and that be the individual who can look at the power concentrated in bad governments and say, they know, they know that whatever this is, it can end, and needs to end, and are willing to destroy the ways they are priviliged to do it.

A dragon is a government you can fight, or kill, or fuck, in the right way. The dragonborn and dragonkin? Antifa.

And maybe there need to be more stories of dragons torn to pieces with scythes and thresher’s sticks.