You know it’d be pretty easy to draw the conclusion, based on the way I talk about it, that I didn’t like 3.5 D&D. This couldn’t be further from the truth – I haven’t played the game in ten years and yet I still have all my books, still have character sheets and build articles and all sorts of interesting work I did. I wouldn’t write these articles about 3rd edition books and mechanics where I reminisce about how the things I did – silly as they were – were still cool. I liked 3.5.

But gosh did it make it hard. 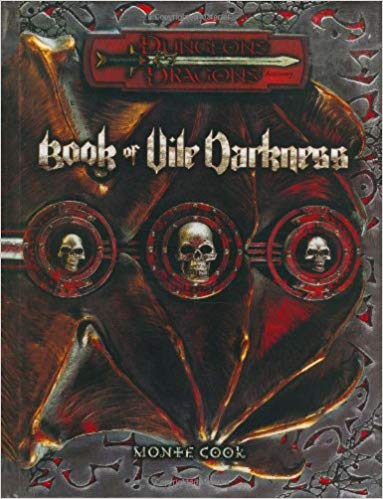 The Book of Vile Darkness is an embarrassing remnant of a new-internet gaming landscape where we were still not all that sure about what we were about, or what people were about, and Wizards of the Coast were still creeping out from their own defensive measures about the Satanic Panic that had prompted some abrupt decisions a few years earlier. October 2002 was when Wizards made a whole joking preview for Magic: The Gathering that revealed their first Demon card in years, and also the release date for the Book of Vile Darkness.

Now I’m not going to go in on the Book of Vile Darkness on its own, but rather, I want to talk about one specific part of this book. See, while 3.5 was part of a deliberate push from Wizards’ developers to make the game more inclusive and broaden the brand, those efforts now are the kind of thing a company would get put on blast for (and would deserve it). We’ll talk about Regdar another time, don’t worry. The point is that Wizards were trying, but they were still very much approaching the idea of a broader audience in a stilting way. 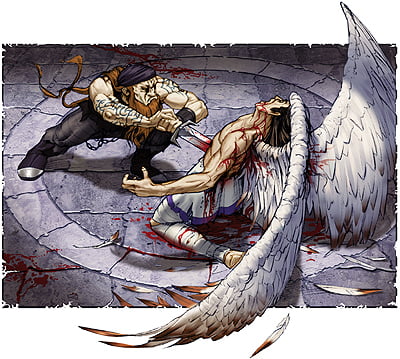 The Book of Vile Darkness is kind of a handbook for making a bunch of villains, which is already a funny thing – constructing a fully fleshed out (mechanically) villain was a deceptive time sink in 3.5. You didn’t need to do that much working gearing them up or giving them small incremental feats that improved their performance or meant they could walk amongst the dead in a graveyard, not really – that kind of mechanical justification suggests that monsters and players exist on an even playing field which they do not.

Included in this book of monsters and meanies are some smatter of magic to flavour evil spellcasters better (and hey, how about that, villain spells), prestige classes that it wasn’t worth your time to make villains into, because their abilities just weren’t well balanced from one to the other, evil equipment, evil poisons, evil magical items and just some grab bag of evil monsters that they could depict actually doing something gross in the end of the book.

There’s also a section at the start, on different ways to represent evil in your game as the game rules allow. It’s pretty weird, though, and I don’t mean ‘weird’ in that it’s talking nonsense within its own framework. It’s weird that it’s a thing trying to talk about adding dimensions of intention and context to the good-and-evil mechanics that are designed to create a feeling of ambiguity and complexity still has the phrase, ‘until he receives an atonement spell.’

Because there’s a spell for being forgiven.

Don’t worry, nobody spams it, because it’s expensive. 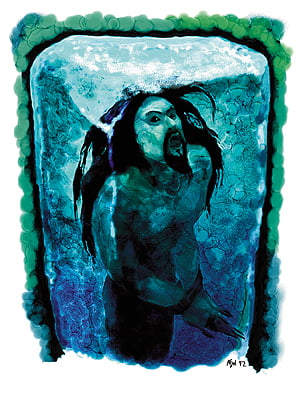 There’s something to be said for the failings of this book, particularly because the book wants to talk about some interesting ideas. There’s a sort of burbling understanding that the evil options the book offers are very strong, and players shouldn’t be given access to them (except), but the options largely aren’t balanced as good villains, either.

Now, some of this can be attributed to standard D&D 3.5 balance problems – the prodigiously dangerous Life Drinker doles out negative levels on a touch, meaning a level 12 big bad evil guy could just one-round a level 12 character with perfectly adequate rolls. The Ur-Priest had faster spellcasting than anyone, getting access to level 9 spells before even the most dedicated cleric, spells that deformed the game. But those kinds of mistakes can just be attributed to ‘the designers didn’t appreciate how powerful those effects were.’

The failing that lingers, though, the failing that isn’t a matter of design and mechanics, but kind of an example of a failure of worldview. The talk linking kink to evil. The talk about sexuality and bondage as hallmarks of the villain. It reminds of the passage from the Unearthed Arcana book that lists ‘transsexualism’ as a villainous mental disorder.

It’s not like it’s trying to be actively hateful, not like there’s some proactive homophobic instinct here, not likely. This was a bunch of writers copying things they hadn’t really paid much attention to. Photocopies of photocopies, ideas of people who never thought to talk to a trans person, as they tried to put those ideas into a game, a game that people built out on, and played in their own games, and every one of those creative actions just replicating one small group of writers who didn’t think that much about what they were doing.

Sometimes you wonder about these silly memes we do like Gruumsh Says Trans Rights. It’s silly. But it stands out and it becomes a meme unto itself, and you realise that it’s something that you’ve kind of got to do, because everywhere, everywhere else, there’s a deep, thick layer of this kind of passive vileness.

And not the interesting kind that makes stories better.