Hey, didja ever think about how Dipper Pines might be trans?

which is provocative and it’s confrontational and it sets a tone for a sort of performative destructiveness of a hypothetical other because you’re not going to read any further if you don’t agree so instead we get to smugly sit here, under that line and go hey, hey, how about that asshole who wandered off, anyway, here’s my conspiracy board of interconnected nonsense to explain the cartoon character thing I said.

But hey, this is something that’s been kind of just lurking in my mind for a few years now. See, one of those ‘hey, every character could be trans and you’d never know it,’ and like, yeah, that’s true. Then the question becomes ‘what stories look interesting or meaningfully different when there’s a trans character?’

The original analysis I read suggested that Asami Saito reads as a trans woman, and then suggested, hey, what does this internal knowledge do to change the character?

That’s when I got thinking about Dipper. 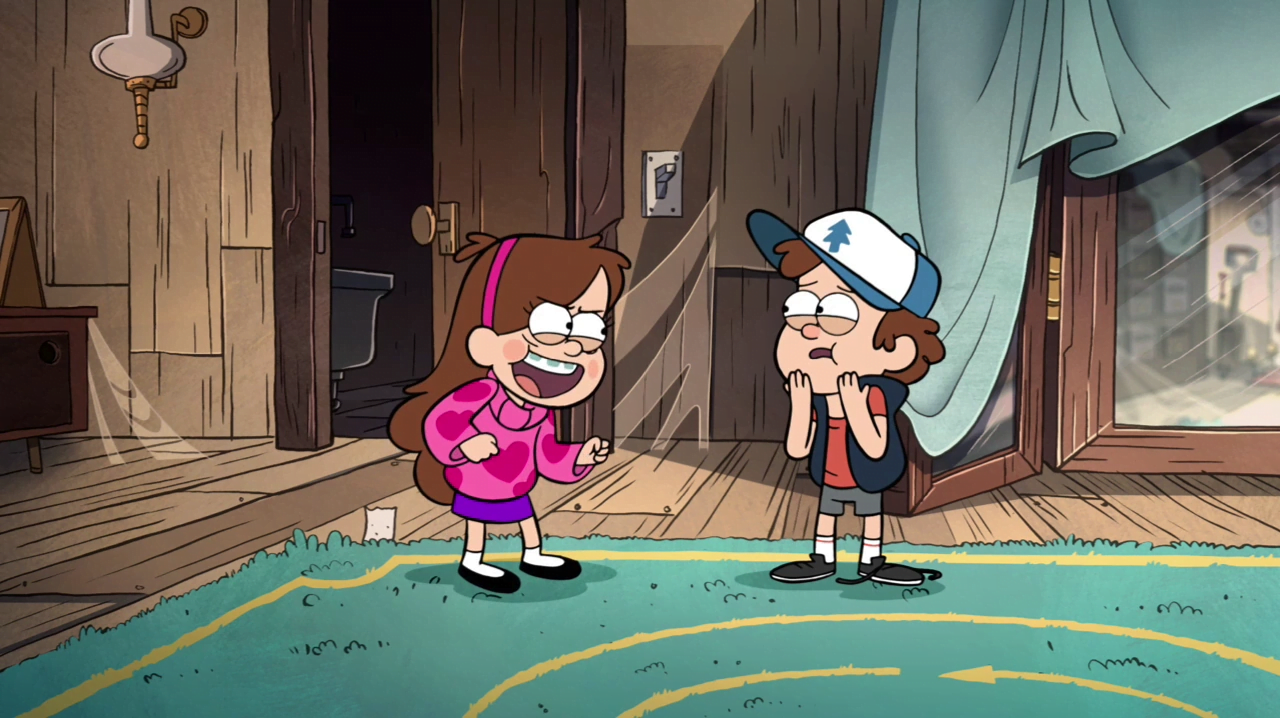 I don’t dislike Dipper. He’s a really good little Adventure Boy character, with all the struggles that come from that. Smart, but not super smart, tenacious in the way that kids tend to be, and that tenacity becomes a genuine virtue that also ties into a very preadolescent feeling that you’re on the precipice of some great discovery and some great change. That’s fine.

Dipper is also probably pre-pubescent, and very focused on growing up. This isn’t very uncommon, and it does make him keenly aware of traits of his that we associate with weakness (and commonly, therefore, femininity). He wants his voice to be deeper, he wants to be bigger and stronger, he’s heavily invested in the idea of measuring up to bigger boys, even through violence. Throughout the whole series, Dipper is constantly trying to reject comparisons to his sister, constantly trying to assert his masculinity, and constantly trying to prove himself to a masculine standard, even as everyone around him is incredibly kind and permissive about his behaviour and encourages him to be who he is.

We do get some hints about what we’ll call off the rack biology when his voice breaks and his eager interest in his chest hair – which doesn’t prove anything, either way, but it’s still common to signify that with those traits. C’est la vie.

The thing that I find interesting is that if Dipper is an AFAB trans boy, that precipice he’s standing in front of is puberty, and the potential unwanted changes that brings to his body, and the ways he keeps trying to assert control over himself are things that are very much big and scary and can feel beyond his control. All that masculine behaviour isn’t a cis boy deconstructing his own relationship to toxic masculinity but is instead a trans boy trying very hard to construct masculinity that he’s going to hope can keep his identity together.

Is this a better story? I dunno, I’m not a trans boy, I don’t know if I’m being insulting or what. I like Dipper. I like both these possible interpretations of the character. If you give me a choice, though, between whether I’m more interested in a boy learning to be less of an asshole and a boy trying to learn how to be a person and avoiding ever becoming an asshole, the latter is more interesting to me.

I’ve talked in the past about how gender and sexuality are pretty different in stories, because they don’t necessarily get expressed in the same meaningful way. To reveal a character’s sexuality to an audience, you just can demonstrate it by showing who that character expresses interest in. That’s easy, and we even have a whole set of storytelling signifiers for when characters feel that kind of thing. But when you want to talk about a character’s gender, there’s really no good way to express that because even if a character talks about it, it’s possible they’re lying because the pressures to do so are so phenomenally strong.

It’s wild and pretty unfair, and there just aren’t that many trans dudes in media period. I can’t think of a single Adventure Hero Boy who’s AFAB, which is a real shame, because I think it gives us cis boys a chance to look at how our masculinity is constructed, in real time, in a way we often won’t trust other cis boys to show us.