This is a bit of a tease of a subject, because if you’ve ever heard me explaining games in general, there’s this phrase I’m fond of using: A Game is a Machine to Make Stories. Not tell stories, to make stories. Every game you play gives you a story, and you may not think it’s a great story or not, but you will always walk away from a game with a story. Since stories are one of the fundamental things that change how people think, it seems to me that this is a pretty powerful tool to put out there! 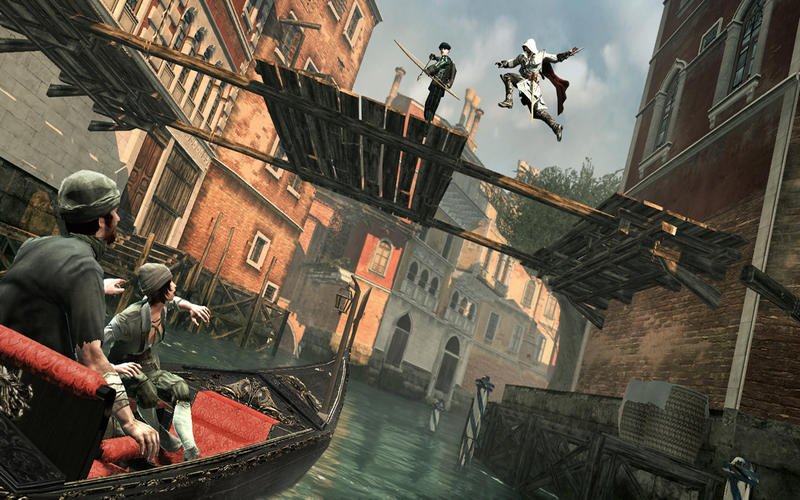 Plus, there’s the question of What’s a non-RPG game? Consider if you will Assassins Creed II – a game that exists in the Ubisfot mould of A Big Open Thing You Just Do Stuff In. In this game you’re explicitly rewarded for behaving the ways the game tells you Ezio Auditore does; when you match with his memories of an event, for example. You are, simply put, trying to be as much like Ezio as you can. Is that a RPG?

Most folk will say no, and I’ll happily concede that, because ‘RPG’ is a bit of a nebulous term. So for the purpose of this conversation, what I’m going to do is try to define what people might mean – generally – by the term ‘RPG.’

An RPG for this purpose is a table-top game where the game primarily gives you the tools to create characters and scenarios for a human to mediate. That’s a rough outline, but it’ll do; because we know what we really mean is stuff like Dungeons & Dragons or Blades in the Dark or Breakfast Cult.

With that in mind, let’s talk real quick about three simple, small examples of Storytelling Techniques in non-RPG Tabletop Games. 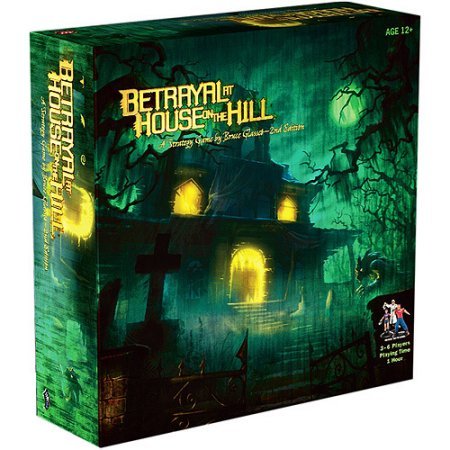 If you’ve heard me talk about Betrayal At The House On The Hill, you know I’ve had this metaphor well-prepared; in a lot of ways, Betrayal is like an absentee parent. For a portion of the game, it sits around silently, letting you entertain yourself – and then someone trips some meter, some amazing thing happens and suddenly, the game presents you with this bounty of mechanics and storytelling and two different books you need to check through, and look in the box, this one scenario has special cat counters look!

I have problems with how it’s executed and how it makes the first part of the game dull, but this tool system is really good, if hard to implement. In the case of Betrayal, it gives you a set of possible semi-random dials that determine what a thing might do, and then the game makes sure that every thing the game might do is cool, and interesting, and stands apart.

This is a great device, a good mechanic, and you should steal it except, here’s the problem: This is hugely effort intensive and it will eat you alive if you don’t keep it contained. Simple fact: Storytelling like this gives you dozens of slots to fill and you can’t make any of them too similar. In this way that opening dull half of a game is a big value for this game; it gives you enough time to forget the exact way the other versions of the game are, and it slows you down enough that you won’t rush to find two identical or similar game modes easily.

The mechanism in summary is randomised set of variables determine a huge number of tailored possible scenarios. The problem with it is it takes a huge amount of effort to make interesting. 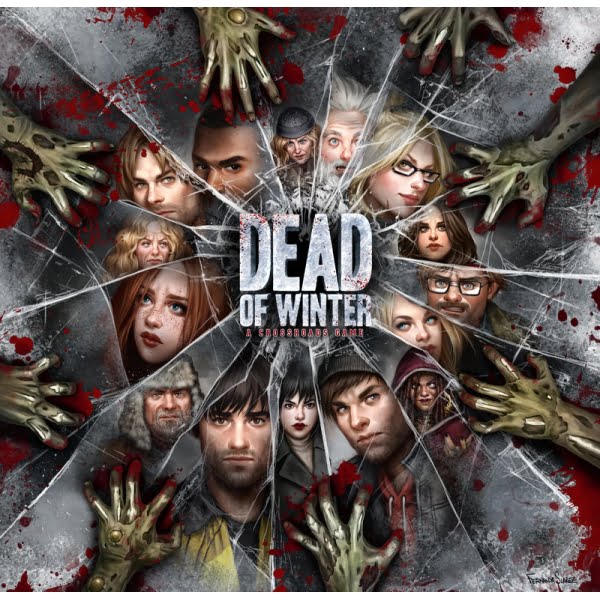 Next up we have the Dead of Winter Crossroads system. Here the system is in summary: At the start of your turn, another player draws a card from a deck, and that card has on it a trigger condition for the event to happen. Could be as simple as ‘visited the Mall’ and can be much more sophisticated.

The Crossroads system is really nice: particularly because a human interpreter, in secret, keeps track of the info, and the fact the system is being deliberately obscure means you can have it do weird things – like it can actually ask you to search for cards in the deck to set up secondary events, or it can lead to you referencing another deck altogether, or it might even do nothing, leaving a player sometimes eerily afraid of a thing that doesn’t do anything. Plus, because each other player looks at a Crossroad card from time to time, they each learn the kinds of things that can happen but never be sure of what will happen.

Dig this system. It is also effort intense, but not nearly as effort-intense as the brutal weight of the Betrayal book. 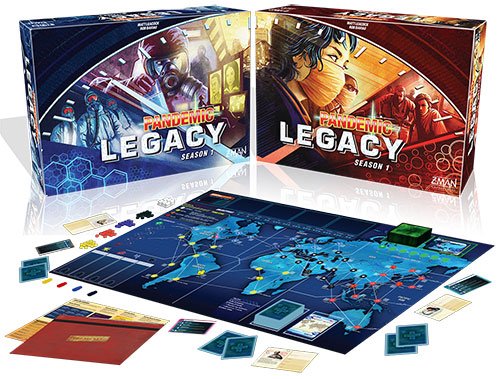 Inevitably, this was going to come up; The Legacy model of games. Legacy games are great, because they let the game have a story arc by dint of adding mechanisms or removing them, transforming the experience of how you play this game. You can’t access that city any more because it is Lost, for example.

Problem with Legacy games? Well there are lots, but it combines problems from the Crossroads games’ level of effort and production values, but it also runs the risk of being unrepeatable. Oh, I suppose if you wanted to combine the Betrayal model you could also make your board game incorporate dozens of permutations of this, so every time someone buys it they might not get the same model of the game’s legacy as the first one but good gracious what the heck are you thinking about.

Applying It For Yourself

With that in mind, here are my three pieces of advice if you want to do this as an indie developer:

Now that said, what about what I’ve done in this vein? Well, the closest I can think to a novel storytelling tool is the game Jiāngjú, which is meant to represent the close of a Hong Kong action movie, where everyone has a pair of finger-guns pointing at one another. 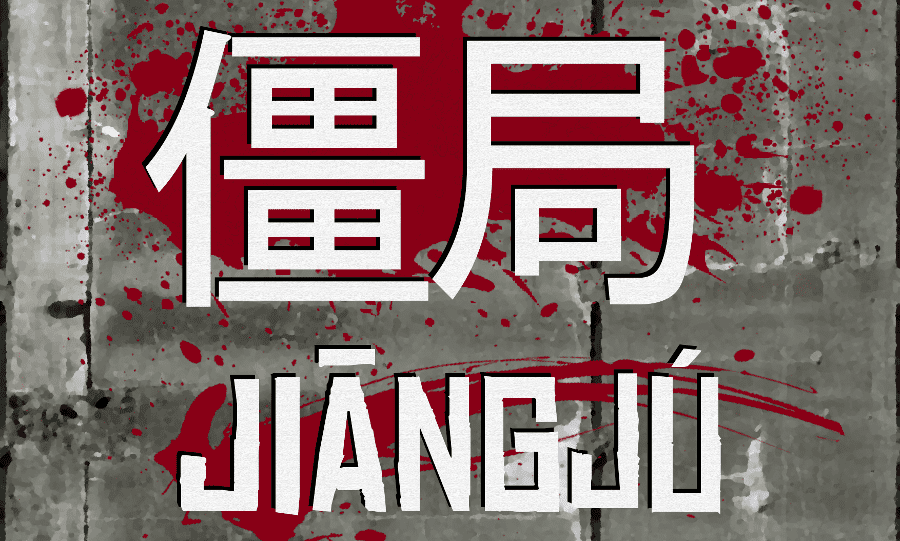 In Jiāngjú‘s largest mode, each player has a hidden role that gives them different values to other players. On the other hand, they know this gives them value to enemy teammates, too. In this case, players have to use their very limited time trying to express a vague idea about who they are to one another in a way that other players can get – while still not giving too much away to their enemies.

In essence, the way to play this form of the game is as if you’re recapping the plot of a long movie, yes-anding your friends as you try to avoid giving away too much of the wrong kind of information. This can mean arguing about who was truly someone’s best friend, trying to find out the edges of who you are, find the edges of what you can give away and not – within three moves of a gun.