Last week I talked about how Voltron: Legendary Defender is a series of archetypes. It’s a story made up of scaffolding, and what holds it together is a consistant moral and thematic outlook. One of the ways the story holds its form is through its villains, and how they, consistently, are alone. 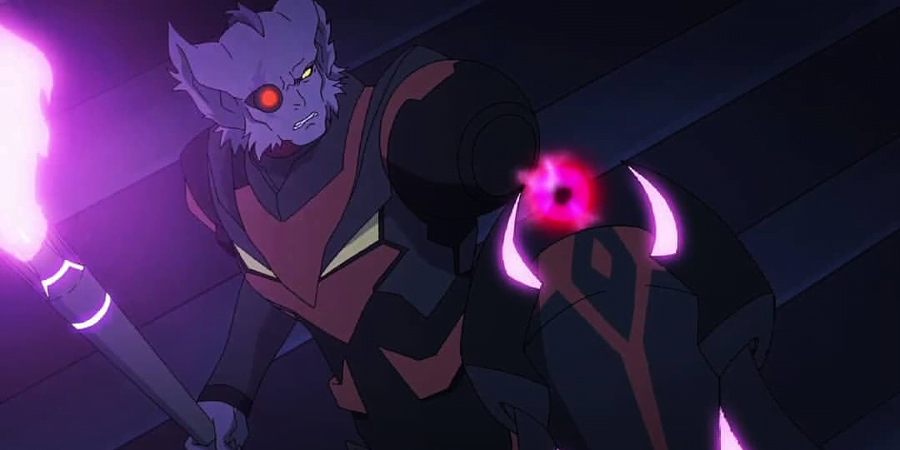 First of all, Voltron’s four plot arcs are mostly driven by a villain who has a plan and that plan sucks and we don’t want it to happen. It might be taking the pieces of Voltron (that we just got), or killing Voltron to claim endless Quintessence (because eff you Dad) or conquering Earth (which is where we keep all our stuff) or to undo the past (and destroy all reality in the name of it), but it’s still an enemy with a proactive plan, and the Voltron force oppose that plan. This means that whatever is being added to the story in each of these plot arcs, it’s always a byproduct of the kind of things the villain is doing. These additions, therefore, reflect things about the villain.

At the start of each plot arc, the villains have marshalled some power for their goal, usually through a large coalition of people. Each of them are leaders, and make some very clear showing of their power, of how they gathered that coalition. Zarkon brings to bear his empire, Lotor has to earn the attention of his people, and Honerva makes herself a messiah to her people.

And one by one, as they fight Voltron, as they seek more power to win, the people around them fall away.

It’s obviously advantageous for a series whose central avatar is a giant robot with a sword for the story to always have some reason to turn large conflicts into one-on-one brawls, ideally brawls where that giant robot gets to do some cool stuff. Whether by intention or by accident, though, Voltron: Legendary Defender makes its story needs into the basic themes of each story, and you get to watch as each of those four villains, one by one, either lose, or sacrifice the connections they have to people around them.

As they reach the crest of their power, they discard everything, and their final confrontation, every time, is against all of the Voltron Paladins, alone. It doesn’t even do it in a basic way – at the end of season 7, Sendak has a one-on-one fist-fight (hah!) with Shiro, while the remaining Paladins get them to safety, then intervene to protect Shiro from being killed. It’s not Voltron vs A Device Made To Oppose Voltron, it’s a visceral one-on-one fight with acrobatic leaps, and in the very last moment, what saves Shiro and destroys Sendak isn’t Shiro’s powerful will or his cybernetic arm, it’s his friend. 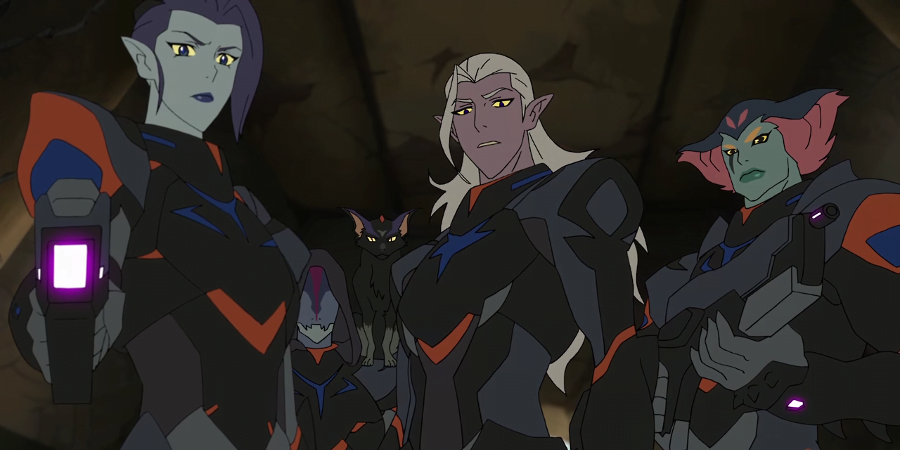 Lotor takes this metaphor to its most obvious conclusion. The second major villain, Lotor is shown as charismatic and capable, a leader and a politician (as far as Galra go). Not only can he command the force of the Galra empire, he has a squad he deploys to do specific tasks: Ezor, Narti, Zethrid and Axca.

Lotor gains loyalty, as a currency, and spends it. While he can appreciate what draws people to him, he can act like a friend, it’s always coming at it with an angle. There is no true friendship, no true kindness from Lotor – literally everything he does, we learn, is to fuel a personal ambition, which is in part to try and make up for feeling spurned by his father. That is to say, the loneliness of a child is the motivation for the actions of a man who is willing to doom worlds.

Fun trivia: Ezor, Narti and Zethrid were all going to be named, originally, Ythorod, Aihpos and Esor, because they were going to be a reference to The Golden Girls. The theme song of The Golden Girls is Thank You For Being A Friend. I don’t think this is particularly meaningful, in a corkboard and pins way, it’s just a fun little underscore to my premise.

Lotor’s drive for the power that will let him overwhelm Voltron brings him to literally murder Narti, because he believes the alternative is to be caught by Haggar. It’s not – it’s literally paranoia. This sows distrust with Ezor, Axca, and Zethrid, and he winds up driving them away, because they’re afraid he’d get rid of them as soon as they were inconvenient. They leave him and they live because they leave him. In the end, his friendships, whether with the Galrans or Allura are shown to be things he will sever and discard in the name of his wants.

And so, in the finale of his story, Lotor faces Voltron, and he faces them alone. More alone, in a way, than Zarkon ever was; Zarkon is shown to have no friends, to have no connections around him, nobody who cooperates and respects, only people who fear and obey. Lotor had friends. Lotor chose power over friendship, and it was the friendship of Voltron that pulled him down.

Lotor died because he was marinating in corrupting energies, and Voltron survived because Allura saw that it was best to escape, and her friends listened to her. 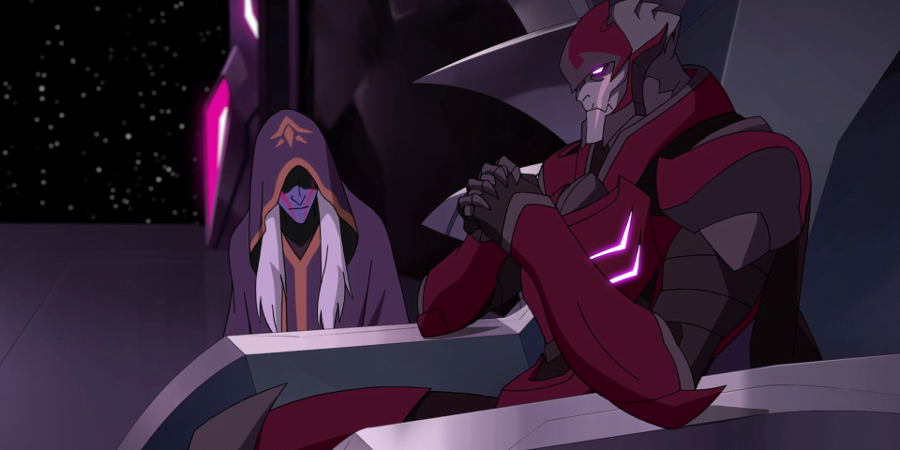 I feel like it’s almost too basic to point out how this series creates its villains out of an obvious alternative to our heroes. The heroes are a group who cooperate and respect their feelings, the enemies are people who don’t.

It plays into the tragedy of them, I suppose, if you see them as tragic. I personally don’t – I think it’s entirely possible that if your dad blew up a planet in a fit of rage, then he’s a bad person and any excuse he wants to make for it doesn’t change the fact that blowing up a planet is a pretty amazingly bad thing to do.

The lonely villain could be a romantic figure, I guess, which is why it’s nice that Voltron: Legendary Defender makes sure to show you that these villains are total dicks. In all these cases, the people in question never doubt their purpose, they never doubt their goal.

There’s this phrase – heavy is the head that wears a crown. It’s an idea that plays out in Shakespeare’s work that the hallmark of a bad king is to never doubt their own kingship. Lear, Macbeth and Claudius all do not doubt their kingship, even if Claudius regrets how he got it. The idea that you need to have some doubt to do a good job of leadership is important to much of European storytelling.

Zarkon is the bad king who never doubts that he is justified to be king. In early appearances, he is implacable and silent, powerful in his own way, and demonstrates his power by fighting a Lion – personally. Zarkon is entitled to Voltron, to its pieces, to what he wants, and that entitlement, that demand for his own selfish want, drives him. It let him make a shell of his wife, it let him treat his son as a thing. In his final appearance, Zarkon, no longer twisted by Quintessance attempts to say that he didn’t know what he was doing.

And Allura rejects that.

Zarkon ends, honestly guilty. The Quintessence, he says, blinded him – but it was his choice nonetheless. There is no moment of rallying around his words, no moment where people comfort him or forgive him for what he did. They stand apart, and they let him cry, as Allura excoriates him for what he did.

Zarkon was alone, and alone, he countenanced terrible thoughts.

The story could have, hypothetically, made the problem one of doubt and followed in the Shakesperean pattern. That Zarkon didn’t doubt himself, and that showed he was a bad king, in the essentialist way of the monarchist. Instead, though, with Voltron’s constant frame of reference of friendship versus isolation, we instead see that it is friends, the ability to listen to and trust the people close to you, and to tell them what’s wrong with you, we are strong, and we check our own worst impulses.