The ending of a month and the time to reflect on what was made in that month. How’s 2019 shaping up so far?

This month’s blog writing largely made me happy, with a special focus on having been able to get some long-form thoughts about Voltron: Legendary Defenders off my chest (1, 2, 3, 4). I recognise it’s a contentious issue and I try to approach it without showing complete scorn for people who don’t agree with me.

I also wrote this month about my mechanics in some game projects, which I am intimidated by doing, but want to do more in public, to show how games work as process, and to avoid forgetting work I’ve already done.

I also started a series on the Monthly Game Project. When I run out of anecdotes from the Monthly game project, I’ll probably run out of posts on that topic.

For the first video of the year, first up we have Abe’s Oddysee, Early Meatpunk.

This video has been in production since about september 2018, which shows in the way it refers to ‘this year.’ This video proved harder to make than I thought it would.

I might do a breakdown of the problem, but basically, this video took so long to make because I was using too much game video, and it made it very hard to make the dialogue line up with the video. In my Mankind Divided video, I had the two loading screens that looped to work with (and I liked the effect of that a lot), whereas in this game’s case, there’s a lot of death-explode-reload that can punctuate or detract from what I’m saying.

About three days before this video went up, I stripped out literally all the video I was using for this and started over, with the intention of using some more stills and pan-and-scan to show concepts, and the whole thing came together much faster. I like it a lot this way, though there are still places that I think are just mistakes (like the zerg/confederate flag fade).

Nonethless, this feels like progress. I still need to be better about accumulating video, but I don’t feel as threatened by the task of making video.

One final thing with this kind of video is that I think I’ve decided that long stretches of varied, natural gameplay are only that interesting to watch as part of a whole. Two hours of naturalistic gameplay while I talk about things feels kind of like a stimulated recall podcast, and I think that’s fun. Editing two hours of video into the best bits that also shows continuity of the story sounds like heck on earth.

This month’s shirt is a Pokemon G1 shirt and also sneakily I guess, a FireRed LeafGreen shirt. It’s the badges that you get from gym leaders! 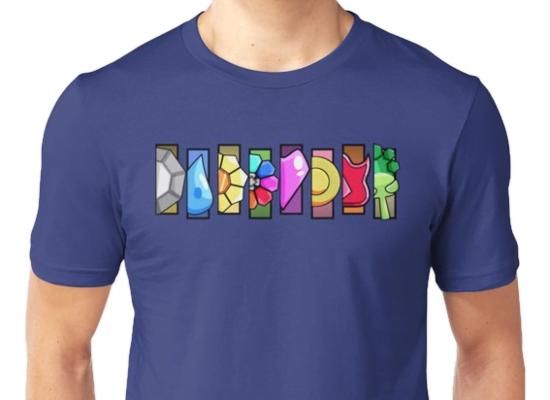 You can get this design on Redbubble or on Teepublic.

The biggest Games-Related thing that happens in January is CanCon, which is effectively five days of non-stop work and seeking air conditioning. I’m writing this just before we head out to CanCon, so expect a CanCon summary in February (Update: I did it the night I got home).

CanCon is going to represent the starting point for my new release schedule, too; each convention, I want to have one good, new, tangible game to sell people. One of the reasons the monthly schedule turned out to be such an awkward idea is that when you meet someone two or three times a year, at a convention, and they want to know ‘what’s new’ and you tell them six new games, it’s too hard to absorb. I want to make sure I have a good, robust new game to show each convention, and CanCon is where all of the 2018 games get their showing.

One of the pressures of making a new game in the same month as a con is getting the prototype made and then the stock ordered in time for the event. That’s a problem. By making the convention the signal to work on the next game, I’m hoping games will get a more natural development cycle, and take the time they need.

Boy, gosh. Study-wise this month mostly was filled with trying to get a talk, paper, and presentation ready for DIGRA in February and for Can-Con in January. That’s very time consuming and stressful. It means I’ve barely read any books, which sucks.

Still, I was done – mostly – with all my blog work for January by the 15th, so I have a backlog again! Sweet!