Sonic Boom is a tv series made up of ten minute shorts based around the adventures of a hedgehog named Sonic, his enemy Dr Eggman and his friends, Knuckles, Tails, Amy, and Sticks, and a host of other characters. And from there… what is it?

Let’s talk, real quick, and by that I mean the bulk of this article is going to be about it, about intertextuality. 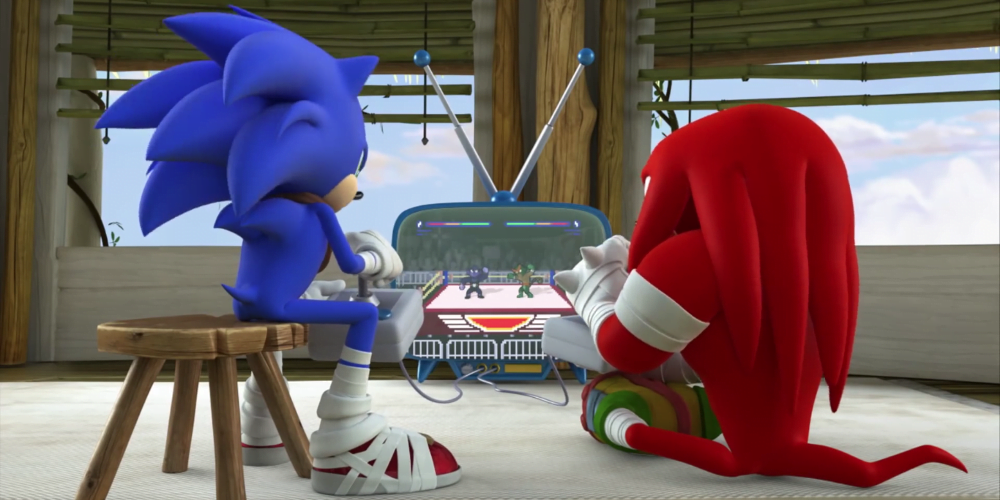 Before we can talk about Sonic, of course, we have to talk about Mario. It’s tradition.

When you talk about Mario even though there’s no specific story you’ll point to for it, you have a sort of general idea for what makes a Mario story. You know what Mario is, what Mario’s day is like, what he does. Mario appears in a story and rescues someone, usually a Princess, usually from Bowser, or someone Bowser-scale. The pieces of the story are in their place, and whether Mario has a water gun or is collecting stars or is playing tennis or a board game or karting or doing turn-based math combat or whatever, there’s still a fundamental Mario-Ness to him. Even the Mario Super Show, a ridiculous space that includes live-action segments of some very well-meaning, very nice actors who were making up nonsense about being plumbers from Brooklyn, isn’t really wrong. The thing for Mario, the amazing thing about Mario is that Mario doesn’t have a canon, like, a single perfected text, but is rather made up of a huge disparate collection of disconnected texts that don’t need to be harmonised into a single text. This is what I’d call a textless canon. You don’t need to point to a story to show what Mario stories are about. You know.

By comparison, you look at the canon of Legend of Zelda. Zelda is a universe of narrative stories that have reccurrent themes, made using basically the same individual pieces. And this, especially with the introduction of time travel in the narrative of Ocarina of Time, has induced people to instead believe that there is a single unifying narrative, a pure space of story into which all the other stories slot in. There are people convinced that these stories, which all represent in some cases wildly different cosmologies, are in fact a single unified story with all the smaller stories representing complicated fragmentations of the same. Now, I think this is ridiculous, because it’s ridiculous, and the need to fit all these things together represents a sort of nerd sickness, an inability to accept that some stories just are. This is what I’d call a hypertextual canon. That is to say, there is text, and there’s canon, but some people construct a canon, a greater canon from all these other texts. There is nothing within the canon of each story that refers to any of the others explicitly. There are common traits between all of them, but that’s not the same thing as connecting the texts. So, if you look at this text a lot, you can spend your time convincing yourself there’s an interpretation where they all fit together, but you’re the one bringing that idea to the table, and you’re doing it in a way that makes Biblical harmonisation look positively relaxed. 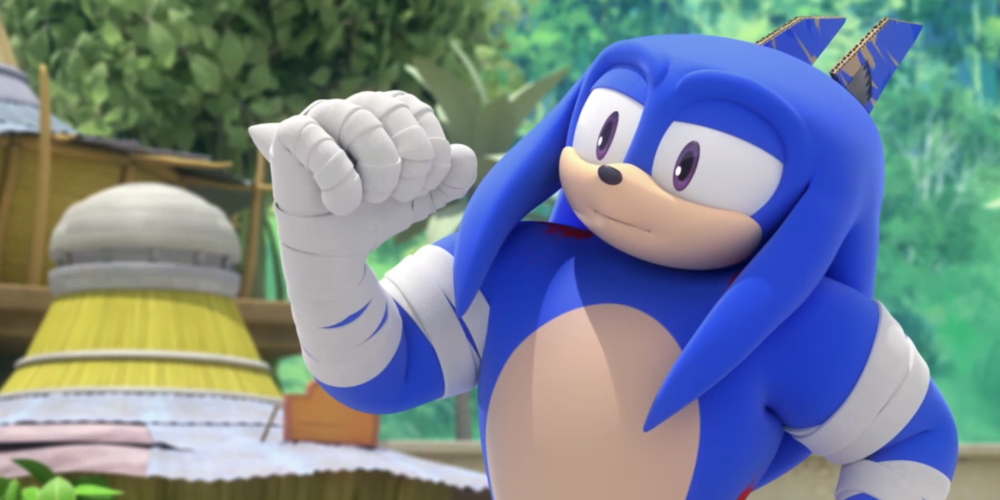 One of the things that Sonic the Hedgehog, the franchise, has got going on is that there is no single central continuity. There isn’t even a assumed continuity. There’s Sonic-ness, but Sonic is a character who, for one reason or another, has tried everything and done everything and there’s been an absolute host of different entry points and everyone who’s started to play these games has a different perspective on what ‘starts’ the story, what the ‘typical’ story of Sonic The Hedgehog is. He fights Robotnik, except when he doesn’t. He has friends, except when he doesn’t. He races, carts, snowboards, flies, spinballs and adventures.

There is no Sonic Story, because there are thousands of Sonic Stories. Some people want long-form continuity-driven narrative of a rebellion on Mobius, inspired heavily by Star Wars. Some want short, punchy, brightly-coloured blue sky adventure platforming with an environmentalist theme. Some want grim and edgy 00s Shadow with a gun, and some want the cart racer and some want him for his presence in Smash, and none of these people are wrong and some of these people overlap. 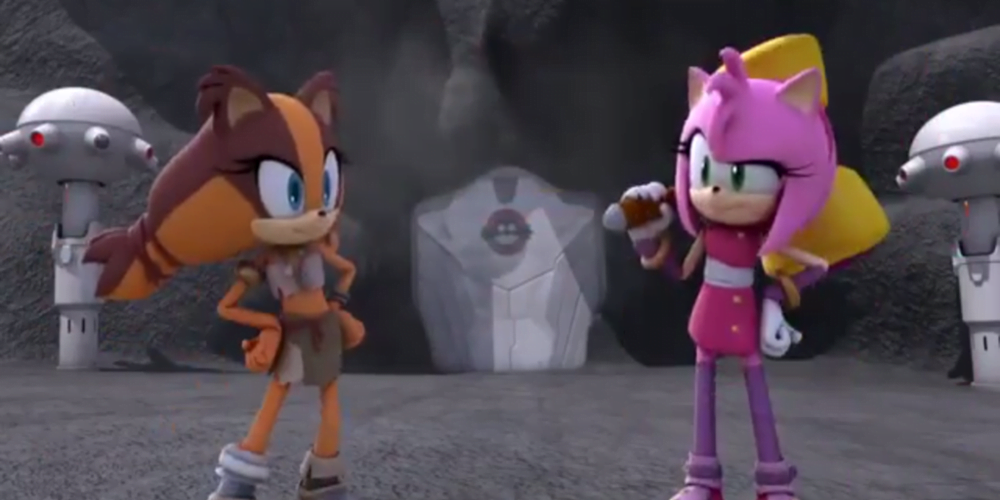 And here we are, Sonic Boom.

It has no meaningful connection to anything in the past, beyond being made by people who have some familiarity with it. It isn’t beholden to a greater continuity. I think, I think, and this is purely hypothetical, but I think that Sonic Boom is a series that was made by people who saw the original Sat-Am show, and decided that because they couldn’t do that, they had to do something different.

And what they made was something wonderful.

Sonic Boom doesn’t have a ton of budget and it isn’t dealing with a cast of characters who are overendowed with dignity. Sonic characters are broadly speaking, jokes nowadays. Even the cool ones, even the ones that are heroes are also jokes. Rather then try to push back against this then, Sonic Boom – which I cannot believe is attached to a game so mishandled – Sonic Boom decided to lean in, and make its characters jokes. 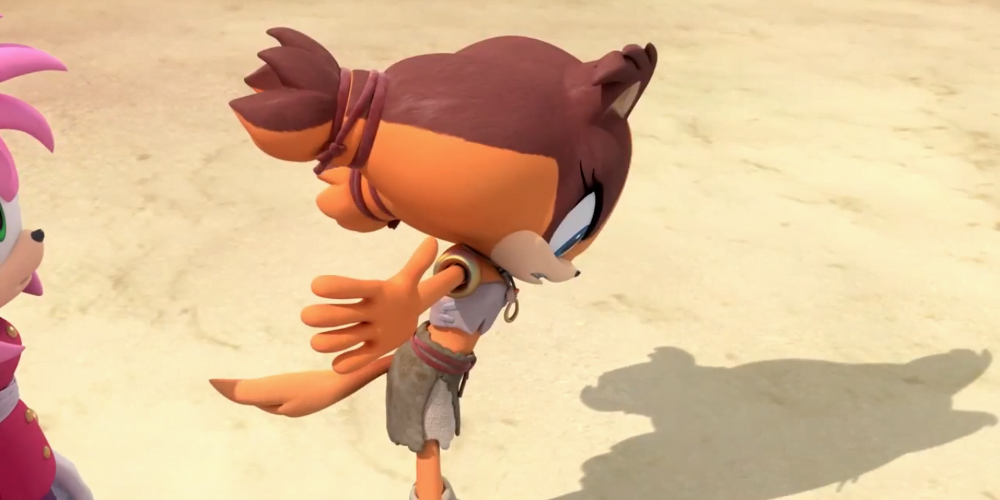 There’s a good beat by the way for handling an ensemble of characters here: If you want a lesson on doing characterisation well, look to Sonic Boom. It has about six major characters – Sonic, Eggman, Tails, Knuckles, Amy, Sticks, and in any paired combination of those characters, you can tell what about them is different, and even if you add a third, you get a different dynamic. Sonic Vs Eggman is a classic hero-vs-villain conflict, but if you throw in Knuckles, the dynamic shifts to being about three people convinced they’re the central character of the story. Tails and Knuckles is a big idiot and a small genius trying to find common ground, but if you throw in Sonic, you’re suddenly dealing with a pair of goofy teen boys looking at the inventions of their smart little brother in terms of how they can use it for mischief.

It’s a good example of the thing that this kind of series can do welll; when characters can have grossly different anatomies and colour palettes, in a high-contrast environment, characterisation and how you express it is your best asset and you can use it well in a ten minute window.

Sonic Boom is a great, funny cartoon, it’s one of the best pieces of Sonic media in recent years, and it pulls it off by leaning into its strengths, and crucially, not trying to be the same thing as another existing Sonic The Hedgehog property.

I wonder if it’s going to become the story.