Mid February, I ran a set of polls attempting to consider exactly what Pokemon could be considered to be round. The premise was pretty simple: if you were limited to a gym leader whose theme was round pokemon, what were your options, really? And if you could do that, would what you got have a chance of being competitive? By what standard? Is there a power trend connected to roundness?

I had some hypothesis ahead of time. First, I thought that a round Pokemon team would have a lot of slow, tough pokemon, and probably would be biased towards water. But that’s not scientific, that’s not a science. That’s just umming and ahhing! That’s guessing!

The problem is that roundness is really subjective, and while I could make the judgment calls, it’s probably easier to have a lot of self-styled experts vote. That way, no roundness is my opinion, it’s all a collective take from a larger group. There are eight hundred Pokemon, though, so asking for all of them was just too much work and people would lose stamina quickly. That meant making a general selection, and letting votes sort out which things did or didn’t belong in the group.

I’d need to make sure to present as many options as I could, to make sure that I wasn’t excluding something I consider an edge case, and let the voting do the elimination for me. Also, this would eliminate things from the group that didn’t belong, but it couldn’t bring things into the group I hadn’t mentioned.

The original list and votes is available here, in this twitter thread, and once I had that done, I made an excel spreadsheet to put together that information in a usable form. Specifically, I wanted to make sure I dropped all the ‘neutral’ votes in case there were some votes that were swayed by that one way or another, and I wanted to know which Pokemon got the most yes votes, even if they didn’t necessarily have the largest percentage of yes votes.

Finally, I had to have some kind of a cutoff. My notion is that if a Pokemon got more than 50% ‘yes’ votes on its roundness, it was round. I didn’t want to define roundness, but would rather let roundness be extrapolated from the vote. This limit then presented a barrier between ’round’ and ‘not round,’ a roundary if you will.

What did we end up with?

Well, we got a graph. 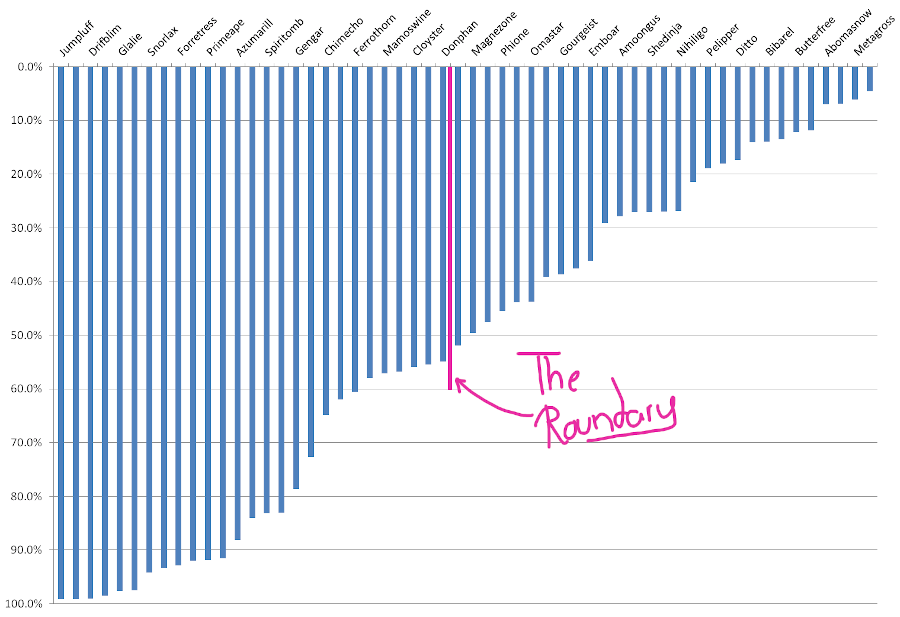 In our list of 56 pokemon, 28 were considered below roundness, and mostly the Pokemon that are round are very much considered round. The grouping that hang around the middle are Pokemon with what looks like a reasonable degree of contention; after all, Donphan is considered round, and Magnezone isn’t. Corsola is comfortably Very Round (72%) while Cloyster is much more contentious (55%), but the two have very similar silhouettes. Aegislash’s primary defining visual element is a circle, while Donphan is an elephant, yet the former is ‘not round,’ and the latter is. Donphan does roll up in a ball, but neither Miltank nor Scolipede crossed the roundary, and Donphan did.

Similarly, Jumpluff is almost the roundest pokemon voted on (99.2%!) and Weezing is similarly heavily round (91%) despite the fact that neither of them are even vaguely spheres – they’re made up of spheres stuck together.

Some traits of roundness then, by observation:

Now, you might wonder to yourself, where’d this idea even come from? Well, I went and did some personal archaeology wondering about where I got the question of ‘what would a team of roundybois look like,’ and it turns out it was this tweet from one Sav Wolfe, from back in 2018. Yes, I apparently keep thinking about tweets a long time after they pass.