Normally I bring up Zul’Gurub and Zul’Aman as dungeon raids mostly to beat up on more recent World of Warcraft experiences. It’s a little bit ridiculous of me to say that kind of thing, though, because WoW is not a discrete experience you have, it’s a pasttime you indulge. I’ve said in the past that if we replace WoW with tennis a lot of conversations seem extremely normal and less in need of some sort of personal justification.

Sometimes I’ll remark that people who want Vanilla WoW back don’t want Vanilla Wow, they want to feel like it’s 2004 again and they’re not worrying about mortgage payments. That’s a bit curt, though – hell, it’s downright insulting, really, because how different is my distaste for Modern WoW different, when I’m still complaining about an inability to recapture the way I felt in 2011 when World of Warcraft grinding kept me from despair during a period of long-term unemployment.

Still, I do feel that whether or not I can say the same thing for other dungeons since, because I am no expert, that the two Zandalari dungeons, Zul’Gurub and Zul’Aman, capture an excellence in game design that is part of why I loved to return to them. I ran these dungeons a lot – not in any way I can quantify, but I’m sure if I wanted to relaunch my WoW account I could find the statistics on how many times, between them, my crew of tanks took out the final bosses of these dungeons. 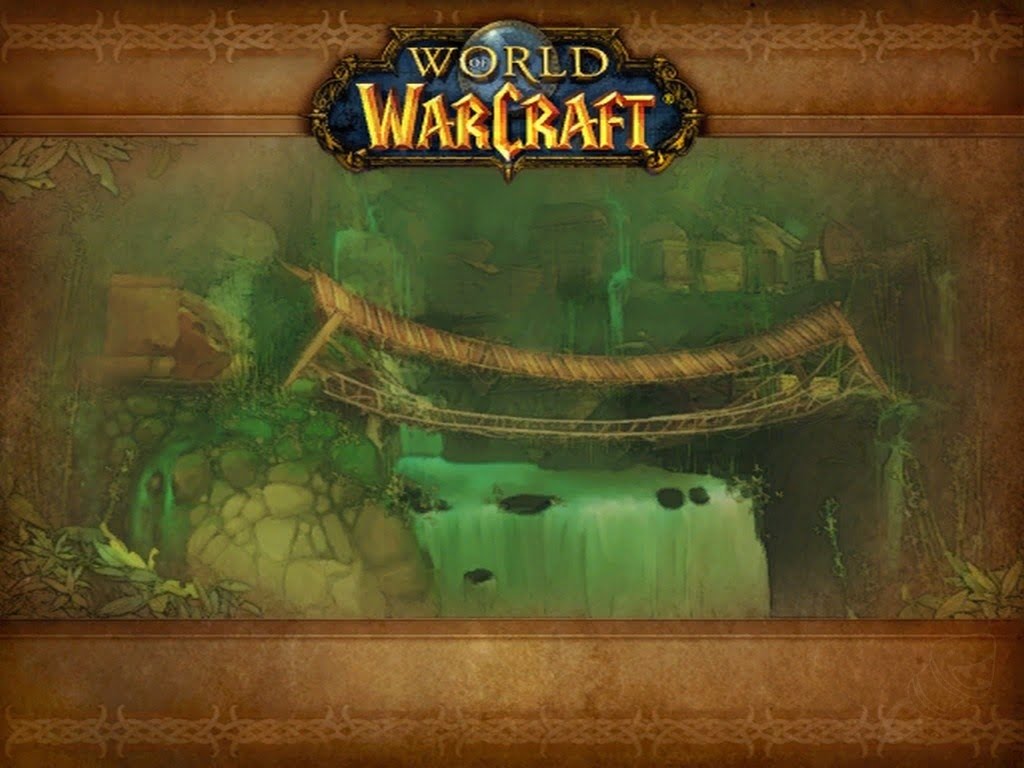 Why, then, did I love going to these Zandalari dungeons so much?

Let’s just first rule out any kind of lore reason. I loved these dungeons and I know a lot of what’s going on inside them but don’t go thinking the story here is good. I also didn’t like the looks of (most of) the gear, so gearing up and looking like a probably-racially-insensitive voodoo stereotype wasn’t a powerful lure. Finally, the guild I was in was myself and two other people, which means I wasn’t likely plowing through this dungeon for a social experience. Especially not with the infamously annoying Word of Warcraft fanbase. 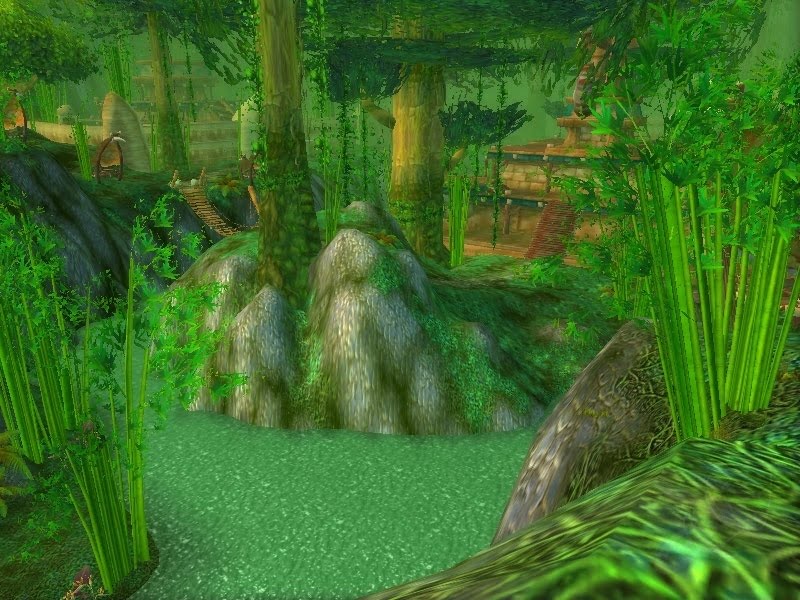 I don’t mean just combat skills; I wasn’t just very good at playing a tank (which I seemingly was – I went from these dungeons to raids with a few friends without any real problems). David Sirlin – and I can hear Dr Harper rolling her eyes already – talks about the idea of labor games and he does this with a sort of textual sneer. In The Art of Failure, Jesper Juul expands on this, where Sirlin gives a sort of backhanded comment about how labor games like World of Warcraft ask something that’s ‘not quite skill.’ I don’t have much time for this interpretation, but it does correctly put a finger on what I mean. Zandalari dungeons were not an experience of uncommunicable memorisation, or reading the subtle animations and timings of a creature like in, say, Monster Hunter or Dark Souls. Everything in WoW has a certain blockiness, a certain slow archness to how they move and fight, and it’s all designed to work for 2004 internet’s idea of lag.

I’ve said it before that the Zandalari dungeons were exercises in communication. Not just in the way the game communictes with you, but in how you explain that to the rest of your group. In any given Zandalari dungeon, you did need to hit a certain raw number capacity, have gear that in aggregate reached a certain value. Still, if you could get into the dungeons, you were probably pretty much good enough at doing them.

In Zul’Gurub, there were a host of optional bosses that all did some extremely rough stuff (including one mini-boss who hit harder than literally everything else in the dungeon, just to see if your healer could pay attention). It wasn’t like this dungeon lacked for things that could rough you up on the numbers of it. Yet these things were all built with information at their core: Every thing that happened you could connect back to the question ‘why?’ and there’d be an answer. It wasn’t actually very likely to show you many fights where things just happened, there weren’t very many actually, literally random effects. 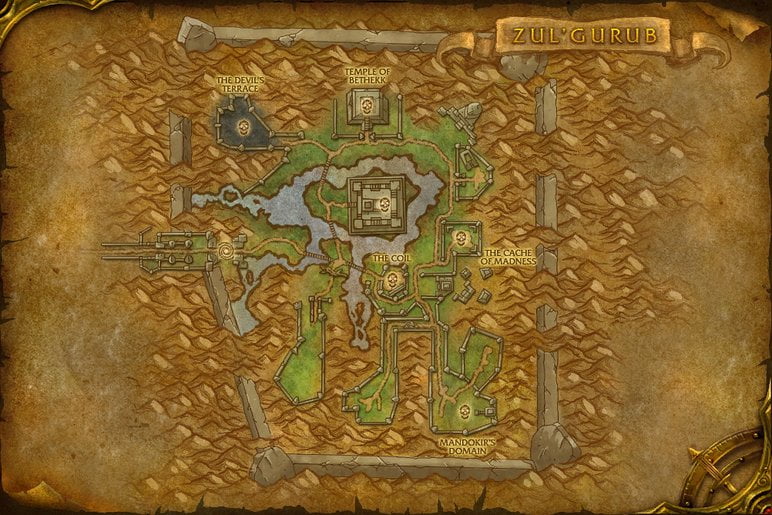 What I remember the most, though, is that doing these dungeons, I could almost always easily communicate what a boss would do, and what we should do in response. It wasn’t hard information to manage, I didn’t need to be an expert. The most complicated boss encounters like Jin’Do and Venoxis, you only had to fail at once before you more or less understood what you had to pay attention to. There was a maze, there were ranged attacks you had to avoid in the maze, there were interrupts, there were phases to avoid and phases to attack. 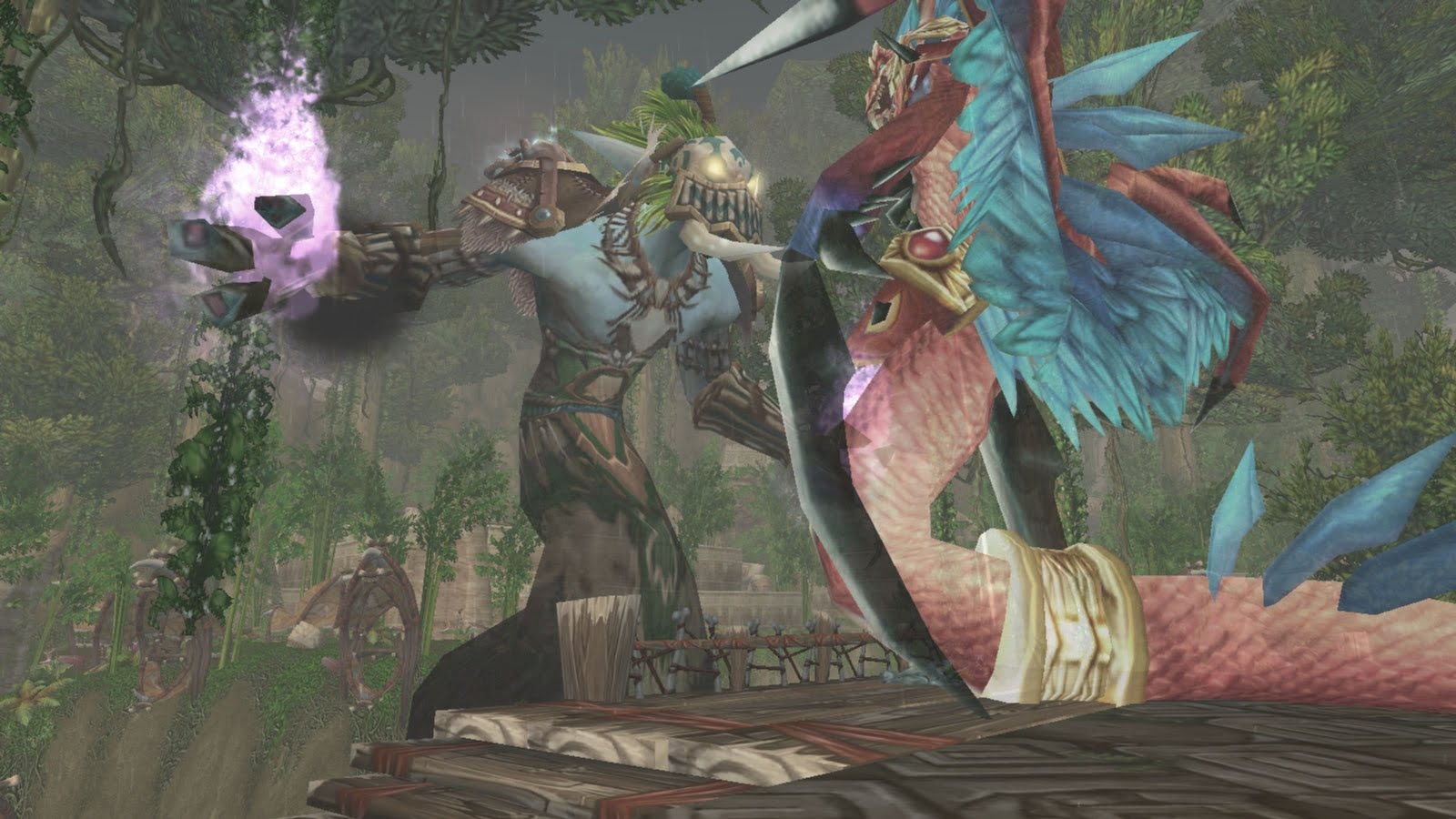 I really loved the way these dungeons made me feel, because I think I really loved being treated like an expert, and I liked being able to help people, with what I knew. I liked how when I failed in these dungeons, the solution wasn’t to shout AGAIN and slam down my hand on the bar like the problem was just Not Wanting It enough, but to make sure everyone understood what was going on. And I really, properly loved the experience of being part of this sliver of history.

Plus I got really smug when I logged onto the forums and found raid tanks who were too unnerved by the dungeons and wouldn’t run them with strangers.

Get good, learn to empathise, nerds.