I so rarely get to enjoy having something I think of as great being one of my favourites.

I’ll often review work that I think of as being excellent, or important, or meaningful, and often with a lens that I try to position outside myself. I am after all, not a particularly useful or meaningful lens for other people to use, and that can often mean that work resonating with me is often a sign that it shouldn’t resonate with anyone else.

I don’t think anyone else was a screaming, terrified mess during The Little Mermaid, for example.

Imagine then my joy at finding a good anime – I know! – that means something to me – oh my goodness – and is actually good in general!

Baccano is a light novel series by Ryōgo Narita that was subsequently turned into an anime, and that anime is one of my three favourite anime series of all time. Set – mostly – in 1930s Prohibition-era America, Baccano! is told as a series of disconnected, out-of-order scenelets that keep three time periods going, and in each of those stories, sometimes two or three or even five stories going on all at once.

There’s a rollicking pace to Baccano! which splits its time lines across multiple light novel stories transpiring at the same time, almost all designed that knowing the end of one of the three stories will illuminate all of them, and therefore, rather than tell you in chronological order (which would probably still be plenty of fun) it instead ping-pongs you from moment to moment when characters are largely aware of things differently to you. 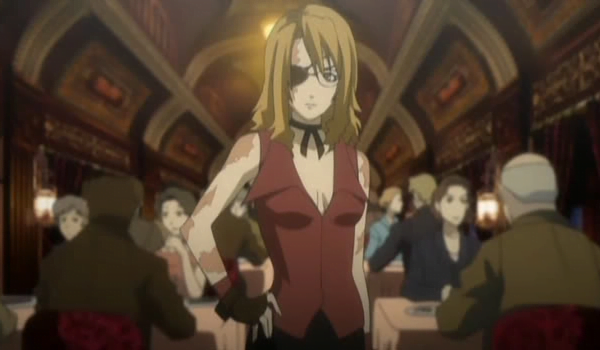 I love Baccano! and part of what I love about it is the cast of characters; there’s a dozen or more of them with different varieties of interesting motivation and distinction, things that set them apart from the rest of the cast. Almost all the cast are people struggling for something to give them meaning in 1930s America, and that can mean finding things they find fun, or things they find rewarding or things they find socially enriching. Some characters are driven to do the thing they know they’re good at, and some characters are trying their hardest to not be the person their gifts suggest they should be.

If there’s a weakness to Baccano! it’s the sheer scope of the cast and how hard it can be to get into, because you’re asked to track the whole opening’s worth of characters. There is one handy trick at work, though, with the recurrent characters of Isaac and Miria, who help give you a grounding in what time zone you’re in. Are they riding a train? Are they digging for gold? Are they drunk? Their recurrent endurance is part of what lets you keep track of where in this big mess of story you even are.

There’s another trick it favours, too – the opening! You may have watched it, but in that opening, they show you pretty much every major character (though not, by all means, all of them) and that gives you a way to keep track of them, learning their names as you go. Some are important to one of the three stories, some are important to all of them.

And that opening gosh. The opening of Baccano! is a piece of such overwhelming, arrogant narrative cockiness in that it’s fully willing to show you plot points, content in the knowledge that you won’t even notice that you’ve seen them by the time they make sense. They slap a name on one of them! 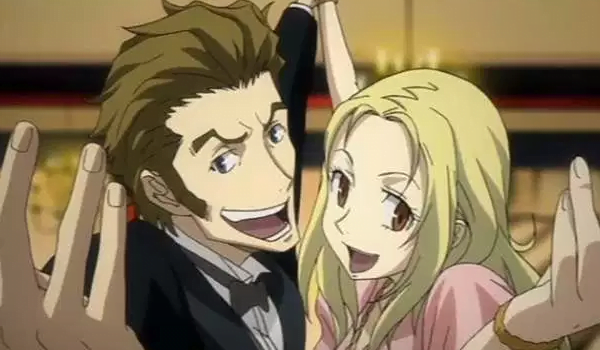 One thing that this anime has woven throughout it, though, is navigating a challenge of translation from the light novel to an anime. Anime can do some things really well, like representing momentary action scenes or using framing of a shot to represent mood or relationships that leaves the audience aware of things they were never told. On the other hand, the inner life of characters in books is much harder to represent in a moving screen. A dialogue in the mind that represents a dozen squalling thoughts crashing together may represent a single heartbeat, but to just put that text out there in an anime, you need someone to read that text aloud and you need something to show it over. Okay for contemplative stuff but in those aforementioned action scenes, showing a character suddenly hesitating for twelve seconds to outline a frantic philosophical debate over whether or not to report someone for not having their train ticket is a bit of a halt on the action. You don’t get to do that kind of thing often.

And Baccano!’s light novels are loaded with the inner life of their characters. If you want to spend your time melting away a week or so, go check out the Baccano fan wiki, which has done everything it can to construct a holistic, provable and citeable list of character details, where characters’ motivations and sometimes their very mental states are explained.

What’s more, the Baccano light novels have so many other ways to represent the inner lives of characters. As one character, normally tight and demanding, dies of a mind-destroying thing, the text that makes up his dying thoughts splits apart and becomes harder and harder to read, ambiguated and dissolving.

The anime, without that kind of storytelling option has to be a bit more cut-down, but then it makes the smart decision of giving you an in universe observer. The story of Baccano! that you’re watching is a story that is, as you watch it, being assembled out of disaparate pieces by an observer, a narrator that is themselves struggling to determine who’s honest and who’s not and who’s just saying stuff. Is the Rail Tracer an amazing bluffer or actually mentally weird (Spoiler: Definitely mentally weird). In what circumstances can you see a person killed and know that they’re gone? What do you make of the ambiguous sequence of events? How can these things work together?

It’s really an excellent translation, and part of how it is excellent is a willingness to cut certain plots. There are a number of characters who would by all rights have their story segments shown – but they’re not, because they’re just not part of this anime. If you read all the novels, some characters are going to show up in this squirming tapestry of plot threads. The anime had the discipine to instead make its thirteen episodes tight and intricate and wonderfully clever and enjoyable. 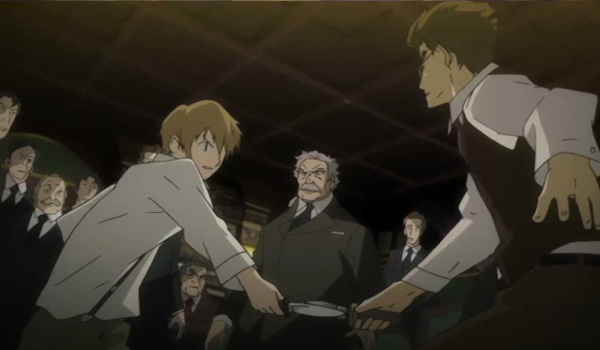 Baccano! is a work of exquisite care and competence. It’s hard to find a thing in it that’s flawed. There’s definitely things I’d like more of – there’s an ace character in the story where you’ll literally never know in the story, a sort-of-trans character who could be fleshed out more, made more present, and there could be more done with queer representation and it’s still a Very 2005 Story as far as what it wants to be about, but within the context of being about Alchemy Bullshit Roaring 20s Mobster Bootleggers And The Whacky Serial Killers Around Them, it’s absolutely peerless.

It could be better.