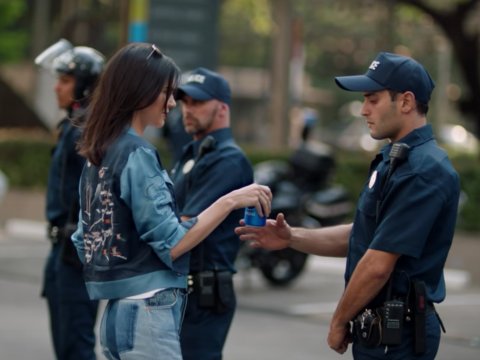 Now a thing I’m seeing swapped around about it is jokes in the vein of ‘Pepsi believe Pepsi is cop countermagic.’ Which is silly, and insidious and awful, but. But but but.

Okay, so first up, let’s talk about advertising. You’ve probably heard all sorts of things about subliminal advertising or the impact of advertising on your brain, which is a pretty successful pile of nonsense that convinces you that advertising is really powerful and dangerous and a lot like programming people. It’s not against advertisers’ interests to convince you that they have, in fact, superpowers. Thing is, the #1 job of advertisers isn’t to sell you products, it’s to sell advertising to people who aren’t you unless you are a multimillion dollar company with a giant pile of cash to blow.

Advertising is, let’s say, let’s say there’s a fairly tenuous relationship between advertising and success. Part of this is because advertising just doesn’t have the sample sizes and demographics to prove it works. You remember Dulux dogs? That dog they used to advertise Dulux paint? Didn’t appreciably improve Dulux paint’s sales, but really did improve sales of the dog. There’s also this problem of saturation, where your brain starts to just sort advertisements into big blocks – basically, at a certain point, your brain starts to say, when you’re being shown a product, ‘oh yes. Products exist.‘

There is however a form of advertising we’re pretty convinced works, and it’s an advertising method you kind of can’t do unless you’re already a massive multinational corporation. It’s supersaturation. It’s designed to represent your product as so overwhelmingly common, so universally available that people think of your product as part of being normal, as part of just existing. It’s about being background radiation. And you do that not by subliminal representation or cow-shaped ice cubes, you do it by just showing up everywhere. You put your brand on the sides of buildings, cars, trucks, vending machines, you put it everywhere, and you distribute your product absolutely everywhere too. It’s got to be this combination of availability and omnipresence. It only works for products you use regularly, for products you want to reach for all the time, replaceable and reusable.

Simply put, this is the sort of advertising corporations like Pepsi and Coke can do. And it’s a model that almost only works for their particular variety of product. You can see other companies wasting money on this kind of thing – even Apple’s marketing in the same vein has challenges in that people don’t need to buy new Apple products every week. It costs a lot to stay on the top of everything, to be everywhere doing everything.

And that’s where we get to this ad.

The company behind this marketing is, from what I can tell, doing exactly what they’ve always done. They’re trying to create a schema, a worldview of everything is normal and Pepsi is part of it. You know things are normal, because Pepsi is there, and Pepsi is normal. The best results of this massive multinational research company, trying to manage its already extant status of everywhere for everyone, is to make this ad, based on exactly what they can prove or know. The thing with this ad is that it’s not trying to say use Pepsi to change your world or Pepsi is part of the revolution. What they’re saying is even when you have a protest, for any reason or any purpose, hey, Pepsi is there. Pepsi is part of your day to day life.

And your day to day life will probably feature regular protests and confrontations with the police.