Okay, no wait, let’s not assume. The basics of Cube is that it’s a pool of cards and you draft them and play Magic: The Gathering with what you’ve drafted. An in-depth discussion can be read here.

Wait, no, that’s a bad idea. Winston Drafting is the idea of a format for drafting cards between a small number of players – two or three is the usual numbers. You Winston draft by slowly generating piles that become more and more desireable. You can read an in-depth discussion about that here.

I have a bunch of really nice little Magic: The Gathering boxes, and something I’ve been trying to do with the game is play more games that are both varied (so I don’t get bored), and contained (so I’m not asking anyone I play with to know a metagame they don’t care about). Fortunately, Magic lets you design basically your own environment, and by making deck building part of the game, I can set aside the problem of one player putting a lot of deliberate extra power into the game.

A problem that comes up with Winston Drafting, I’m told, is that you struggle for playables; what you wind up building is a deck that can’t necessarily guarantee being aggressive, and the game is often about protecting yourself until some big bomb takes over the game. This was said to me as a criticism of the format, rather than a really neat example of a kind of magic that I personally quite like. I think one of my favourite complaints from this list was it’s almost impossible to make a brainstorm control deck, which, sure, I guess, if you’re like that.

With that in mind I decided to sit down and try to make a Winston Draft micro-cube something that two or three people could draft at once, and here’s my model for the breakdown. I have some nice fat-pack boxes that are otherwise sitting empty, and I sometimes only have one or two people to draft with, so this is my parameters to build within. 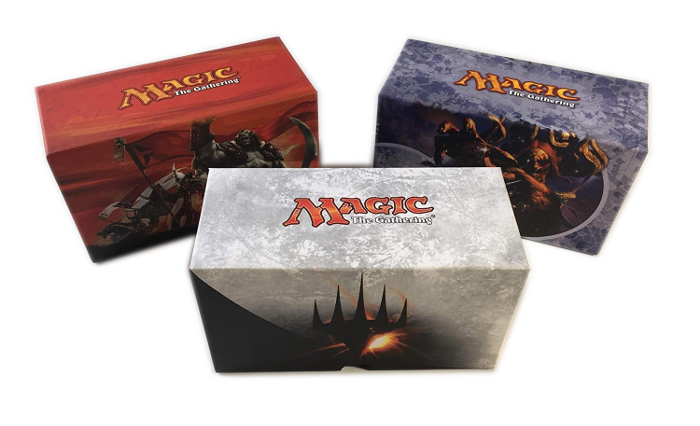 How many cards do I have to work with? The smallest version of a Winston Draft pool is 90 cards – back in the day, it was a sealed pack and 3 boosters, now it’s six boosters (with some lands and tokens mixed in). In 90 cards, split across 5 colours, assuming you get exactly half (which is unlikely), you can only expect something like 9 of each colour. The box can fit a pretty sizeable chunk of cards – 300 unsleeved, easily, but probably more like 250 sleeved. There’s need for lands, too. Assuming that a deck is likely to be 23 playables, 17 land cards, and if some sort of impossible math works out so two players want to play the same colors, that would probably mean something like 18 lands of each colour – if someone’s drafted a mono-colour deck, they probably won’t be fighting for the lands of that type with another player.

How Important Are Pivots? If I put the components of say, a warrior deck in a cube, then odds are good it won’t actually need any of its lords to work – it’ll just be a deck full of warriors, which attack and block. If I put in the components of a storm deck (which if the cube is slower and grindier, may be desireable!) then there needs to be some route for that deck if they don’t draft a storm payload, like maybe including some Prowess creatures that can at least make a ‘spell slinger’ deck work.

How Important is Colourless? The easiest way to do this is to split the remaining 150 cards across 3 colours, for 30 cards of each colour. That means though there’s no room for any colourless cards – no artifacts, no equipment, no noncoloured cards, no colourless lands. Every card I take out of the coloured pile adds 5 to the colourless pile, and thanks to the nature of math there really isn’t any alternative to that. Do I want five colourless cards, or ten colourless cards, or fifteen or twenty?

Colourless cards are good because they get to be slots for decks that otherwise might be struggling for playables. There are some other mechanics for overcoming this problem, like Living Construct, Morph, Conspiracies and a few Eldrazi. The important thing is to make sure that any of these colourless cards don’t block players.

For my first Tiny Cube, I’m leaning towards only 10 colourless cards – a few equipment, some artifact creatures that work generally well, and maybe one or two reusable threats.

How to Handle Gold? The easiest way to handle gold is to keep it equal, and have each of the colours contribute some of its cards to the other colours it can fit with. So, if I have, for example, 28 white cards, I could hypothetically build it so one of those cards is white-blue, and one is white-green. Then if I continue that pattern for each other colour, there’s an equal number of gold colours in each card.

On the other hand, if I want to make multiple gold cards, that number has to go up based on the number of possible combinations. So let’s say hypothetically, I wanted to make a really gold TinyCube, with 28 cards in each colour, I could dedicate 5 of those slots to White-Blue, 5 to White-Black, 5 to White-Red, and 5 to white-Green – and that leaves 8 slots for mono-white. Then, that pattern continues through the cube.

Then if I wanted to say add triple colour cards, it works again, if you stick to the pattern. Consider this for if you wanted to include two-colour and 3 colour cards:

Then you have 28 cards in the ‘white’ slot that represent permutations of white. This then follows along into the next colour:

Now if you follow this pattern, you’ll notice that white-blue has 8 cards in total in the cube, while mono-blue only has 4. That’s why you want to bias the piles towards the mono-coloured design. That pattern, then, might look like:

For this cube, I don’t think I want to go heavily gold. I want this deck to mostly be about building up to some big things in each colour, with maybe blue or white getting some cheeky weenies.

Should there be a theme? One of the easier ways to do a Tiny Cube as best I can see is to grab a bunch of draft chaff from one set. An Ixalan tiny cube or a Tarkir tiny cube should work out just fine, because Wizards are the ones who designed and developed this game. Particularly, those sets were designed around really interesting themes.

One thing with this kind of tinycube that you can do are include lone weirdo lords, like Rageblood Shaman. If they’re the only minotaur in your cube, but there are four copies of them, collecting them might make for a spicy inclusion in the deck. If you do that, though, you won’t want to include other minotaurs.

Anyway, here are some useful notes – I hope – on how to construct a tinycube, focusing on how to make something that works for only two or three people.