Wizards of the Coast Employees, this article is going to feature custom card designs.

We’ve talked about the structural problems of Kamigawa 1.0, but just to recap, the whole set is about six conflicting factions – five mono-coloured groups against the five-coloured omnishambles that is the Spirit faction. With that problem ‘examined’ last time, it’s time to attack the next structural problem: Legendary.

Now, when I examined Kamigawa from the ground up, there’s a bunch of stuff in the set that works out well. Bushido is a good little combat complicator, even if cards printed with it overvalued it, making them mostly only valuable or meaningful within the context of limited creature combat. The flip cards and ninjutsu both work. Yet legendary, as represented on cards, presents two problems.

The first problem is that you shouldn’t make too many things legendary. Legendary is a drawback, and if you’re going to put legendary on a permanent, you need to balance it for it, and there’s an impetus for legendary cards to be good. There is a whole argument about whether or not bad rares should exist, but the issue is narrow rares versus broad rares, and any rare narrow enough is going to ‘seem’ bad. When they’re all legendary, that means you wind up with a handful of cards that need to imply and carry character that also kind of suck. You can lean into the mechanics of it – making some legendary permanents that are balanced explicitly around the idea you’ll only ever be able to have one of them (and I think that’s the idea behind Arvad the Cursed and Day of Destiny).

The second problem is, you can’t make enough things legendary. Legendary is meant to signify something rare enough that you can’t have multiples of it. Putting legendary status on common creatures makes them feel, often, a bit bad – they need to carry themselves with some complexity, flavour, and importance, and if they’re legendary, you get both complexity creep and also boring legends. I mean, legendary commons are kind of boring by design.

Dominaria, the most recent Most Legendary set we’ve had got around this by not presenting legendary as the effect, but historic. Common creatures could care about historic and you could have sagas and artifacts at all rarities. That way, while ‘legendary’ fit the set as a theme, it was part of historic – and you could have common and uncommon creatures that cared about ‘legendary’ in a way that didn’t mean they were mostly garbage or made super-complex board states.

What’s the solution then? You need the theme at least in part visible in every booster. Three sets recently have dealt with this issue, of a theme distribution through a set.

The first is Dragons of Tarkir. Without going into too much detail, it messed up. Here’s Mark Rosewater talking about how they messed it up. The tl;dr is that they put too many dragons in the previous set, not enough in this set, and didn’t make them good or interesting enough. 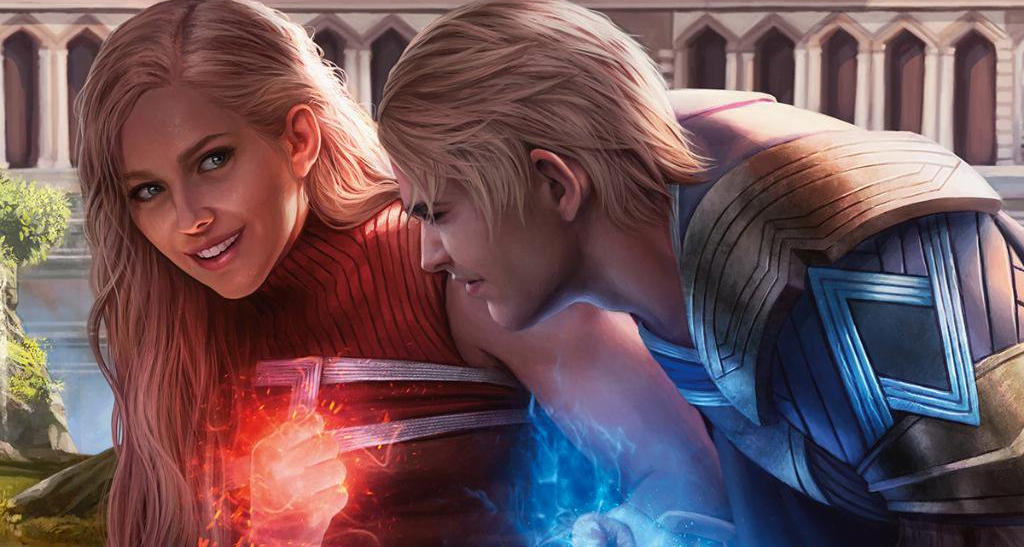 Then there’s Battlebond, which wanted to make a theme of pairs throughout it. Thanks to modern printing technology, they were able to make it so every time a booster was made, it would have one pair of cards that related to one another.

Then we had Dominaria, which could use the same printing technology to ensure that every booster had at least one legendary card in it without needing all those to be of the same rarity. So if you didn’t get a legendary rare, you could guarantee a legendary uncommon. This means any time you printed a card that related to a legendary card, you could at least be comfortable knowing a certain number of cards in the draft pod would respond to it.

This gets into dangerous stuff to consider, though. Because it’s one thing to talk about designing a set within the constraints of existing Magic: the Gathering design, it’s another to talk about it in the context of things like print runs and other invisible systems of the game. Wizards have been pretty open about some of the things in the game design, but there are some things where they’re very deliberately completely opaque. Designing this set as if we have more control than we might seems like a doomed idea by necessity.

Imagine if in printing, you could make it so each rare would require an uncommon and common to appear that relate to them – a legendary location at rare, a legendary uncommon who trained there at uncommon, a combat trick with that character’s name at common. A character’s representation, their story, their downfall. Imagine if you could make it so two cards never show up in a booster together. Imagine if half a booster was guaranteed to be spirit world, and half was not. These are novel ideas, but I can’t be sure they’re even possible, and I don’t want to design to tools that I can’t prove even exist.

One of the ways that Kamigawa bolted its legendary theme onto cards that weren’t legendary were on other cards that are what you’d consider typical effects, and then the word legendary was wedged in their text somehow. Here’s a list of cards like that, limited to the ones that are, y’know, not… really aggressively mediocre. And I am being kind here to cards like Feast of Worms.


Of those cards, most of them aren’t very good, and you don’t need them to be reinforcing a theme to make things seem super obvious. If you cut out all the cards in this list that are kind of bad, like the Elite, the Healer, Vassal’s Duty, Feast of Worms, and just stayed with ‘staple effects with a dash of legendary referencing’ you might not even have enough cards to really make a subtheme. There are more specific cards, that are themselves, legendary – which might put them on the block if the theme is relaxed. Many of these cards wouldn’t be any good if they worked as widely as possible, after all.

To look at Dominaria again, those sets had other legendary cards to support the legendary creatures. Historic made legendary cards better just for being, and there was also the cycle of Legendary sorceries. This was not the first attempt made to make spells that felt legendary. We had, originally, Epic spells.

While I’d normally just say ditch Epic spells entirely, there was at least one that saw some tournament play and I’m loath to throw it out. At the same time, the rest of the cycle it’s from features a two cards overwhelmingly tainted with Suck – Endless Swarm and The Black One which mostly just ate your deck in big chunks. The weirdest thing is in both cases, they’re cards that play with the Wisdom theme instead of playing with the theme of the other three cards in the cycle, Caring About What’s In Your (or Someone Else’s) Library. 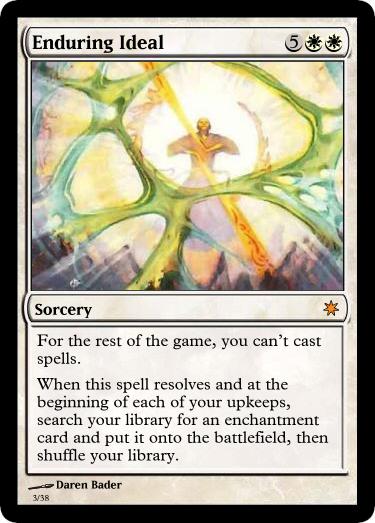 If we keep Epic, it’ll be for five spells, which is a bummer and it kind of eats a ‘small’ slot like Dominaria’s Legendary Sorceries, of which there are six. A good rule of thumb with a mechanic is if you wouldn’t make a card that grants it or looks for it, you probably don’t need it – the legendary sorceries can be found with cards like Time of Need and relate back to Historic mechanics. Epic, on the other hand, is neither referenced nor necessary. Indeed, if they were legendary, they’d be more dangerous, because Planeswalkers fit just fine with Enduring Ideal’s stalling strategy, and searching up Legendary cards is easier than searching up a sorcery in white.

It’s a rough challenge to design. Especially since I feel that if Enduring Ideal was powerful enough to hold an entire archetype together, it probably doesn’t need to be meaningfully changed, even if the other spells do.

Here’s my idea of what I’m going to do going forward. In this Kamigawa revamp, I will be aiming to have lots of legendary creatures, operating on the idea of how Dominaria works, with every booster containing a legendary card. But I will also not require every rare creature be legendary.

Making Kamigawa into two sets with fewer cards in total means some cards get cut. That means some of these legendary creatures are going to have to get the axe, and if some of them stop being legendary, that’s a kind of loss too. I honestly think when I sift through the bads and mediocres, it’ll probably wind up with very few changes.

Dominaria really did something amazing that Kamigawa could have used. It’s not that Kamigawa needs fewer legendary cards – it needed space for those legendary cards to showcase a variety of power levels. If Kamigawa was made today, with Dominaria tech, I don’t doubt there would be non-legendary rares. If I was just going from scratch, I’d probably do the same thing. Because this project wants to recycle as much of Kamigawa as possible, and wants to make as few functional changes to the cards as I can, the legendary theme seems best to keep.