This week, I’ve been playing a green-white brew, based on watching the coverage of the pro tour for Eldritch Moon. I saw the Owen Turtenwald deck that was using Delirium along with Grapple with the Past to fuel a really cool, spicy toolbox kind of deck.

Let’s run down the threats real quick because oh my goodness we have some lovely stuff here: 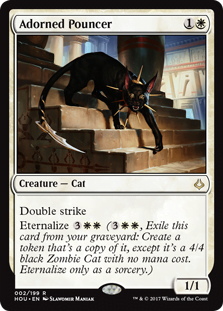 Let’s start with the simplest creature. The Adorned Pouncer is just a 2-drop body that Eternalizes well. It’s not like this deck does anything to buff it or prepare it, but it does do a good job of bearing in the early game, scoring a few early beats or blocking an early problem. It dies easily, but you don’t mind if it dies! Late game, an Eternalized Adorned Pouncer – which you can get in the yard by a whole host of means – is a really scary threat.

Basically, it’s cool, but it’s also not amazing. It fills out the early slots and sometimes in an attrition fight, comes out of the bin and just wins the game on the base of being enormous and your opponent has simply run out of removal. 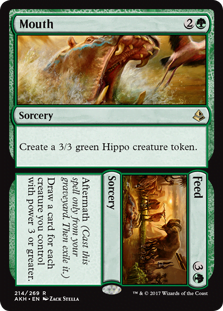 From blatantly powerful to deceptively powerful, Mouth is a creature that dies to Fatal Push but otherwise does the job of most any other 3-power card. It gets in fights, it rumbles in, and it feeds, of course, Feed, letting me draw an extra card. Feed’s synergies are a little cute in this deck; it draws cards off Eternalised (with an s) creatures, it draws cards off Delirious Gnarlwood Dryads, and it draws cards off the Angel token you get from Descent Upon the Sinful.

If you can Feed for 2 creatures, that’s good. Remember, you’re casting it out of your graveyard and that means it’s -0 cards in hand for +2 cards in hand. Ancestral Recall is -1 card in hand, +3 cards in hand, for the same net value. If an opponent kills something in response costing them a card, that’s still -1 card from them for you. Still hurts, but don’t stress too much about it. 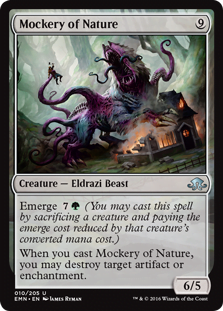 This is a weird one. It’s not really the perfect Emerge creature – I think I’d probably rather almost any of the others except It Of the Horrid Swarm, because the mana curve goes more smoothly from 3-drop to 4-drop, eating my 3-drop. Adding blue to the deck would give me room for Wretched Griff or Lashweed Lurker, both of which are kinda spicey and solve different problems, but, Mockery originally got put in this deck as a removal card.

Note that Embalm tokens don’t have mana costs, so they don’t reduce the price on this. Which is super annoying!

Also, it has some very cute synergy with the next threat, where… 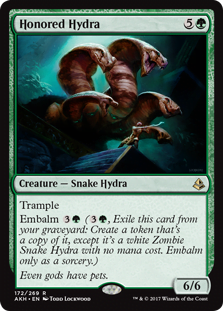 The hydra is good embalmed, and good played from hand. Played from hand, you can play it, attack with it, then Emerge a Mockery and embalm the Hydra on the same turn. The Hydra is also just, y’know, huge? Sometimes you just want a big trampler. Given the way this deck tends to work, with the late game about threats that are hard to permanently deal with, the Hydra is a perfect example of what you could be spending six mana doing. 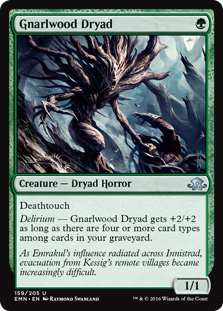 This card puts in some work. I like how it works with Nature’s Way, but it also just servess as a super cheap little aggressor in the early game that’s fiddly to block and sometimes can inflate into a 3/3 when you need to put pressure on fast. Sometimes you need a thing to hold the ground against very scary threats and it’s hard to do better than something so cheap as this. 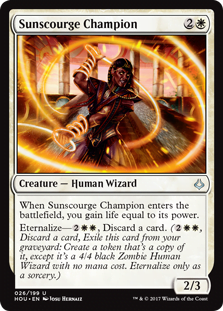 And boy howdy, here we get to a card I’m still startled is so very, very good. Discarding a Sunscourge Champion to eternalize another Sunscourge Champion feels gross, and then you’re basically turning a card in your hand into an uncounterable Loxodon Hierarch. This card also feeds into Emerge nicely – another build of the deck with Wretched Griffs and Vexing Scuttlers happily traded this card into the bin for an extra card. Oh the value.

The removal/card advantage package is designed to be a decent mix of things to enable delirium easily – you can cycle a cast out or sacrifice a Pilgrim’s Eye to get two of the rarer types of cards into the bin really quickly. Cycling lands do that too – and cycling lands mean that Grapple With The Past, even when it misses, doesn’t quite miss.

The big thing with this deck is just the room in it. You can cut a bunch of the cards because you may not like them as much as I do, but you need to be able to point to some things your deck can do that you do like. For example, I love Nature’s Way, which is just super sweet to use with a Gnarlwood Dryad or an Eternalized Adorned Pouncer. I like using Feed to draw cards. I like the mana base and I love that this deck can pack a Wrath effect as a way to make a threat. It’s great fun doing a bunch of trades, letting your first-round creatures hit the bin, swapping for removal, watch your opponent build out their board…

Also, this deck folds to Turbo-Fog, which you will see in the casual room.

MTG Goldfish price this deck at 5.17 online, $22 offline, and I think that’s a pretty reasonable rate for a deck that’s just, you know, fun? It’s hilarious to me that you generate a giant pile of rares and they’re all… rubbish rares?

If you wanted to shift it into Bant colours, you could add the blue emergers, like Wretched Griff, ditch the desert cyclers and replace them with the UW cycle land – There’s something there. It’s interesting. It’s a maybe.

Anyway, this deck is fun. It’s a sluggish midrange deck that gains tons of life and occasionally blows people out with cards they forgot existed, and there’s lots of room for customisation. It’s resistant to countermagic thanks to mechanics like eternalize and embalm, and aftermath and Grapple let you treat your graveyard like a backup hand.