Hello, Wizards of the Coast employees. This blog post is going to feature custom cards and I know you’re not allowed to look at those. So, please, go elsewhere, sorry!

Because I don’t really care about that.

I mean I don’t have the book; I don’t plan on buying the book; the book was handled so badly that Wizards of the Coast apologised for it, and there are rundowns on how the writing is bad (even setting aside the subject matter) and ways that the Nissa/Chandra romance was specifically handled, and really, you don’t need someone who hasn’t got the book, and has no interest in reading it, to go over it.

Instead, I want to talk about a shipping pair I learned about from Twitter, and has basically no basis in actual canon but I don’t care. 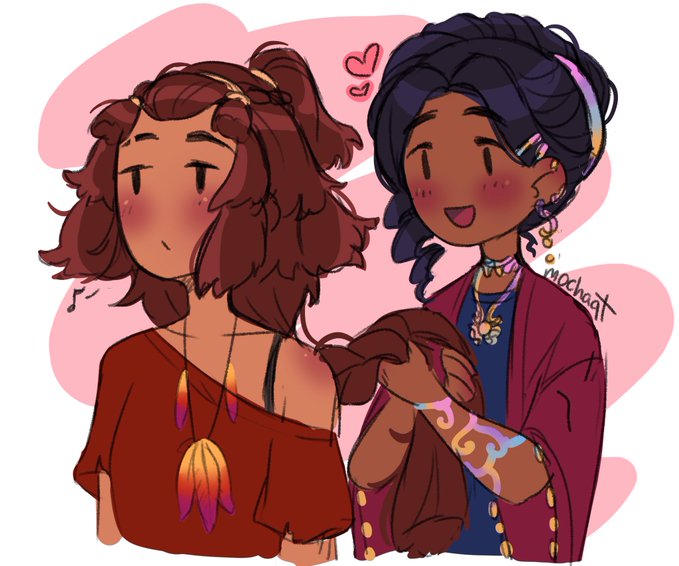 I say it has no basis in canon, but I want to make it clear, it’s that I can’t know what basis it has. These characters have shared one story, and it was the War of the Spark book, and well, I’m not a fan of that book. But the art of Mocha, and this comic in particular inspired me to consider this ship, and it’s adorable.

Now, I like that this is a relationship based around contrasts; Huatli is a physically impressive warrior-poet, who fights with big chunky weapons and rides around on a dinosaur. That’s some Strong Jock energy, and then you blend in her poetry and love of her culture, and that’s some beautiful pride going on there. Saheeli, on the other hand, is an artisan, someone who can appreciate the crafting and artistry of poetry (even if the execution is a bit lacking), and likes making things.

Well, there is currently no way by the standard cards that you can play Saheeli and Huatli as your commanders; they don’t have matching colour identities. Interestingly, if you wanted to play a four colour deck to include both of them, you’d wind up with a deck that was working against itself, because no Saheeli or Huatli are particularly synergistic.

If I wanted to play with Huatli and Saheeli in a deck themed around them, I’d need to make custom commander cards for them. 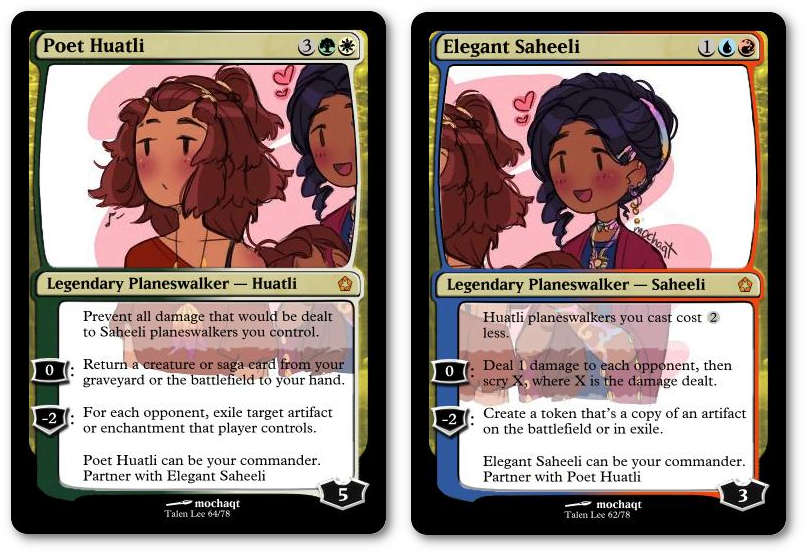 Okay, so these are images of cards, and I know that’s not super approachable and there’s no scryfall to click a link to so here’s the text:

Prevent all damage that would be dealt to Saheeli Planeswalkers you control.

0: Return a creature or saga card from your graveyard or the battlefield to your hand.

-2: for each opponent, exile target artifact or enchantment that player controls.

Poet Huatli can be your commander.
Partner with Elegant Saheeli.

0: Deal 1 damage to each opponent, then scry X, where X is the damage dealt.

-2: Create a token that’s a copy of an artifact on the battlefield or in exile.

Elegant Saheeli can be your commander.
Partner with Poet Huatli.

I’m shy of the mana costs! Saheeli might be too cheap, and her passive may not be effective given these cards will often be paying Commander tax. Huatli’s passive may be too good. But the cards present a good, useful toolset and a place to start, and their utility effects, while broad, aren’t so cheap that they seem to take over the game.

I like these designs, and I encourage you to give a shot making a four-colour commander deck about this pair of cuties!