It’s another month of daily Magic Custom cards, and so here we have another theme! Some people went into Merfolk on May because Mer-May, but I, I chose differently.

WOTC Employees! This is an article about custom cards! Don’t look, please! 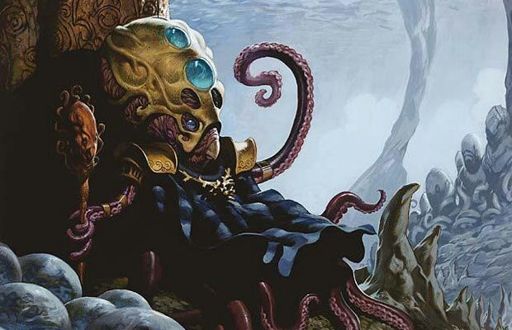 Cephalids are an underserved tribe. There are at this point, no Cephalid lords, and no cards that care about Cephalids. It’s so malnourished a tribe that there are only seventeen cards that have Cephalid in their textbox, name, or typeline. If you add in flavour text, Cephalids get six more cards, and if you believe in my conspiracy theory, Covert Operative is also a Cephalid, so that’s twenty four cards total. Which is a bummer!

Cephalids are interesting to me because they’re a blue tribe that doesn’t feel like Merfolk do. Merfolk tend to show up centered in blue, and they’re kind of widespread and universalised – every colour combination has Merfolk, and they tend to have lots of different versions of a culture. Cephalids? Nope, Cephalids are extremely focused on being just blue.

They are ambitious, conspiratorial, manipulative, and deceitful. We know they can make themselves hard to see, or even invisible. They are total jerks, too.

We can also tell that they largely don’t have any affiliation with existing keywords. They don’t tend to be big, and the biggest ones tend to be tough more than hard-hitting. None of them have a toughness higher than 3.

That’s our framework for making Cephalids:

In order to capture the feeling of showing a sort of ‘lost history’ of the Cephalids, I listed every set from Onslaught onward, and composed a list of all the keyword mechanics I could find interesting or might be able to go on a Cephalid. I got a list of almost sixty mechanics I could conveniently think of, and then I ditched a bunch of them because I didn’t like the idea of them. Armed with that knowledge, I composed a list of the following mechanics:

And now, here’s the gallery:

Overall, the Cephalids were not popular on Reddit’s custom magic – none of them did particularly well in terms of upvotes, and very few generated conversations that weren’t, in my opinion, silly.

Cephalids are a tricky pile to design for. They’re small and awkward and wonky and I think that that plays into the difficulty of making them. There are a lot of cards that would just ‘be human’ that Cephalids could take, which is unfortunate, it plays into the idea of Cephalids lacking an actual mechanical identity.