Hocus is a small-box card game made by Joshua Buergel and Grant Rodiek, with art by John Arios, Adam P. McIver and Tiffany Turrill, published by Hyperbole games, available here. As of the last reading of this, the game is out of print – it’s possibly changed, but right now it seems that the last copies of Hocus are being sold. If you live outside of America it can be hard to get because, I don’t know, we’re not worth the time. So far, So BoardgameGeek Summary.

Something I need to make clear: I have not yet been able to play Hocus. I really want to, it’s a lovely little game, but getting the people together to play something small is really tricky.

Also, this isn’t a review of a game, but rather breakdown study, taking the game’s components and examining them as a designer, to see what ideas they present, what lessons I can learn, and maybe you can use them too. Every game you play or examine becomes part of your library of possible things you can do with your own games, after all! This is not an analysis of play but an examination of the components of Hocus and, in part, a study of what you can do in similarly sized design spaces. 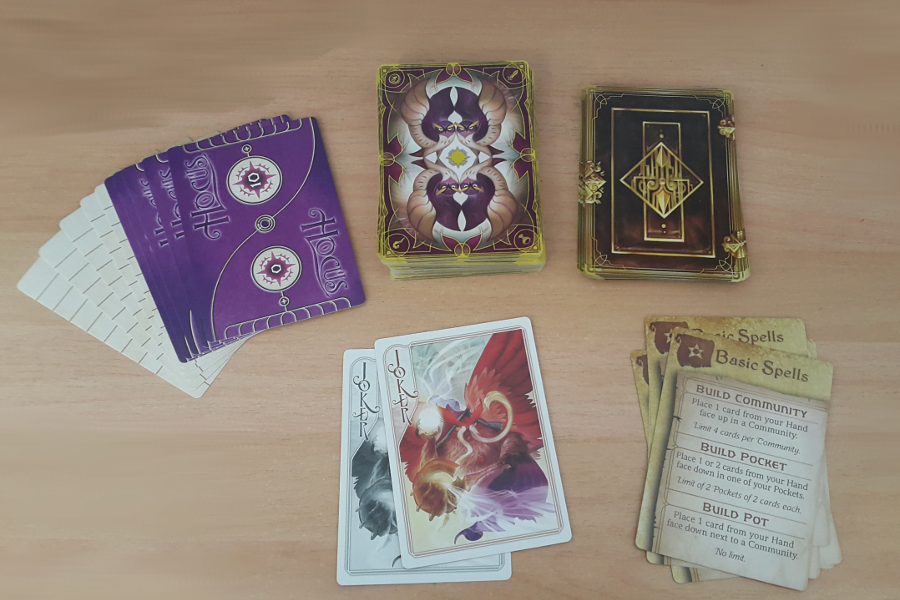 I’m going to have to say this up front because otherwise I’ll repeat myself throughout this: The components and art of Hocus are lovely quality. The box is robust, thick and stout, the cards fit in it snugly but not so snugly they’re a pain to get in, and the art is vibrant, beautiful and pops. The font choice is clear, everything has good margins, and there’s clear gutters on things. Simply put, Hocus is one of the best-looking card games I own, and I’m including my Magic: The Gathering cards in that.

Also in this, you might observe art-resource wise, there’s actually a bit less art than you’d think: there are four full-card art faces, about twenty different icons, and about five card faces and three card backs. Compare this to, say, a 100 card Magic: The Gatherin set which can have something like 12 faces, each with individualised art and one single card back.

What we have here is the total content of the box. Two decks of cards, a handful of guide cards,and some score tracker cards. 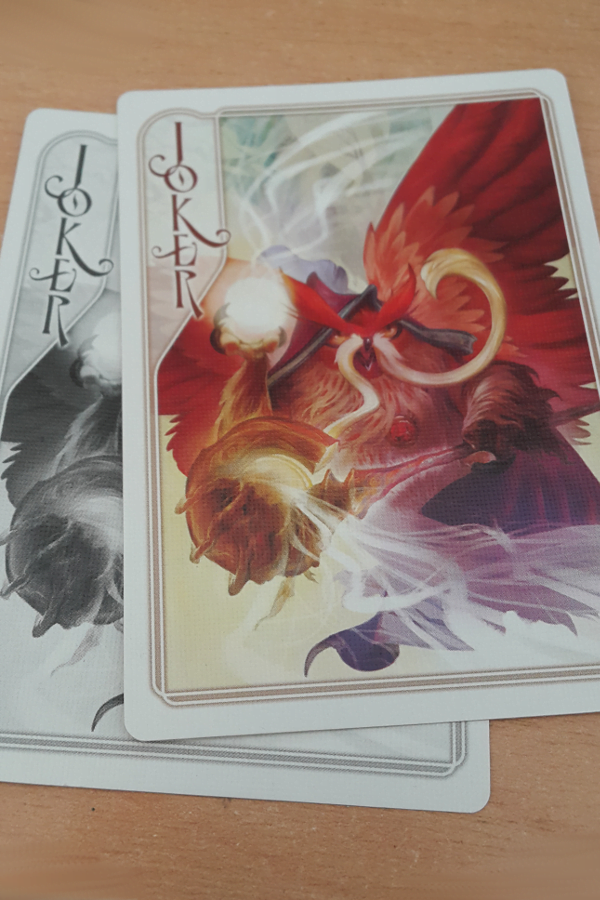 The game comes with a pair of joker cards. These jokers are non-game components, not really, but they do signal something this game treats as very important: Modules. If you check through the rules, there’s a note about how many parts of this game are technically optional, and these jokers are included to allow for other, additional rulesets.

This is really daring. I honestly don’t think I have the courage to release a game with components in it that don’t do anything yet, with the idea that I will eventually fix that, and that it’ll be worth people’s time. Of course, this game owes a lot to Poker, so it’s not like there’s a shortage of possible rules variant sets to work from. 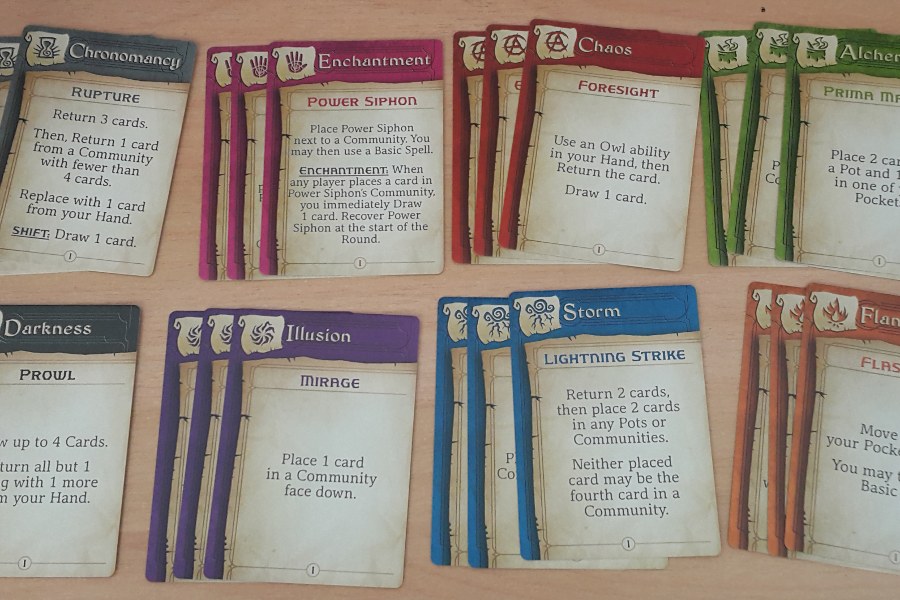 Next up, we havethe spell cards. These are individualised to a player; if you’re the Storm mage, you have all the storm cards. I like this as a flavour idea, and I like it as well as a set of only 3 cards, meaning choices aren’t necessarily very confusing. I do have something of a problem with them in that these cards being cards gives you possible uses for them – like how Enchantment cards can be removed from your spell reserve and placed in places in the game to confuse/set rules and be reminders – but that’s not used in things like the Storm spells or whatnot.

This means they take up a lot of space, which again, is bold: This game is willing to use a lot of space for reminders to make the game handleable.

What’s the purpose of these cards? Why have them? Well, they can make the game more exciting with more players. They give players directly different play experiences that they only look at themselves – it doesn’t matter what you can do from turn to turn, what matters to me is what I can do.

Again, as with the jokers, these components aren’t necessary to play: If they’re too confusing or you’re introducing players to Hocus, these aren’t essential. They also are a major way to lend flavour to the game. Few games are good at conveying the way we often talk about mages in fantasy narratives – a storm mage, an enchantment mage, a time mage – because they often systemise spells a lot. Hocus leans into this.

Also, the typing means the themes of each spell set explain the mechanics, intuitively. The mechanics of how an Alchemy Mage’s cards work are informed by the fact they are Alchemy Mage cards. 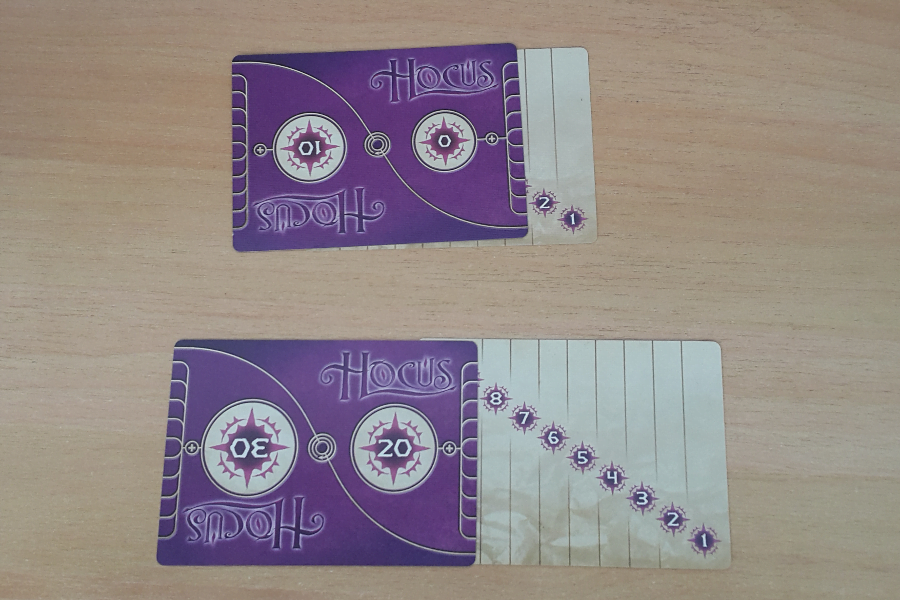 Score tracker cards, lovely elegant mechanic. They, as with everything else, look really nice. I’ve made this kind of design and I honestly think this is one of the better examples. Here, they’re depicted showing 2 points and 28 points.

I think the thing about this design that beats my Middleware design is the game is made so its scope only goes from 0 to 39 and that means you only need to turn the card over once or twice – you don’t need to scope all the way up to 80 by rotating cards. It’s tidier. 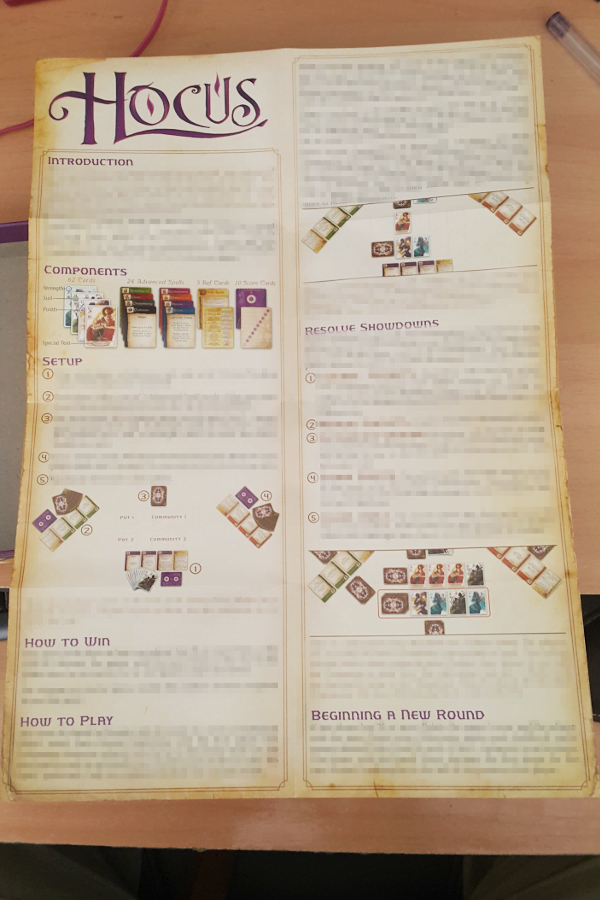 The rules here have been blurred out not because they’re sensitive but just because I don’t want to make that focal. This rules page is a single page, and shows that good use of margins. Clear font, readable, and shows a step-by-step play sequence, with illustrations. This is a really nicely done one!

Another thing to notice is to look at how the How To Win section of the rules comes before the How To Play. This prioritises the way players think of the things they’re learning, lets them know what they want in the game rather than just the sequence of how play unfolds. 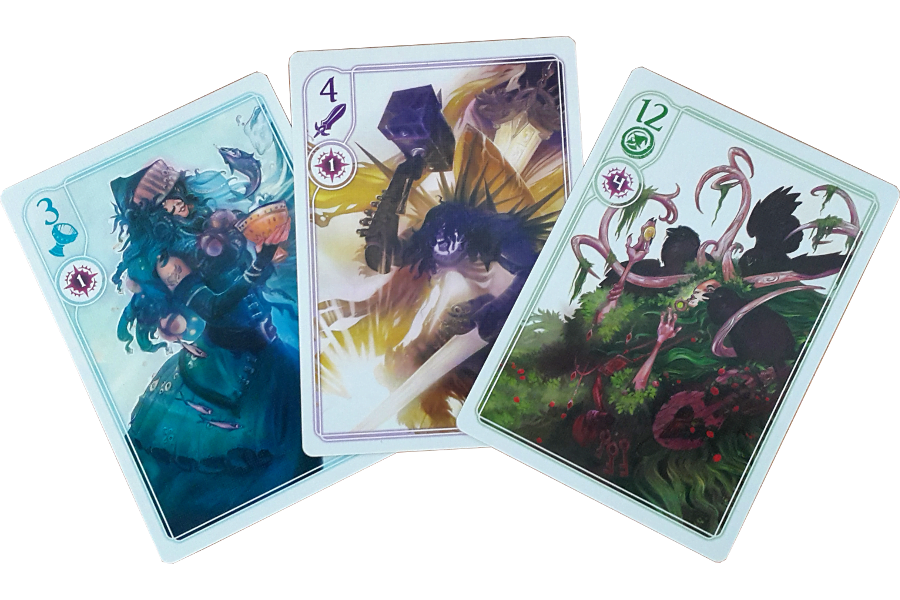 Finally we get to these, the simplest cards. There are four suits of cards – now here’s a weird thing. Despite my efforts, I can’t find the names of these three suits. I mean, I go by Cups, Swords and Pointy Hats, but the green naturey tone of the Pointy Hats make me wonder if it shouldn’t be something like Druids or Staves or something.

Except the symbol of the stave shows up on the next type of card: 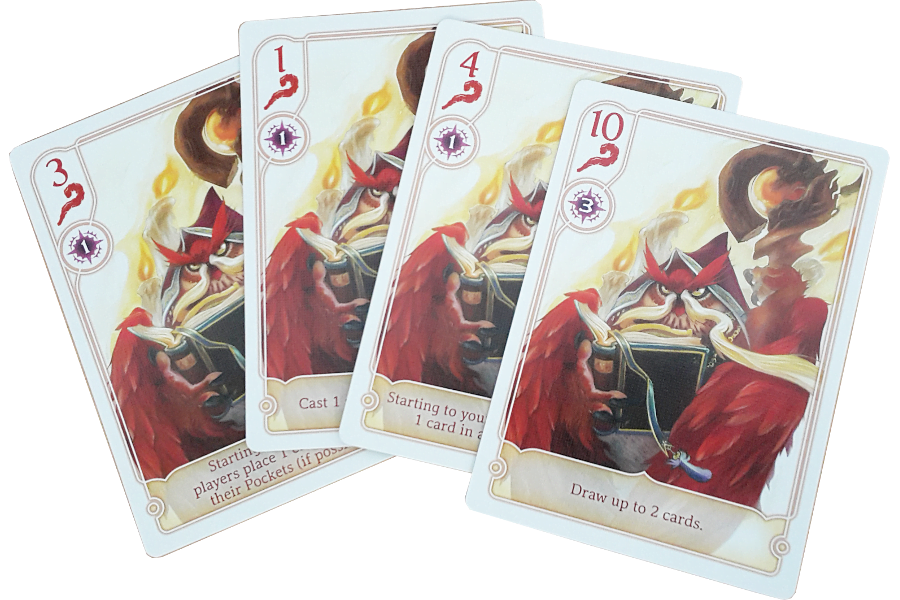 Owls! Owls are like if one of the sets of cards happens to have a bunch of special powers on them, ranging from card to card. Again, this is an optional rule-set, but it is published on the cards as is. You could make a simpler version of Hocus without these, but if you wanted to ramp that version up and make it more complicated, you’d be left needing to print new material or a reference sheet of some sort. 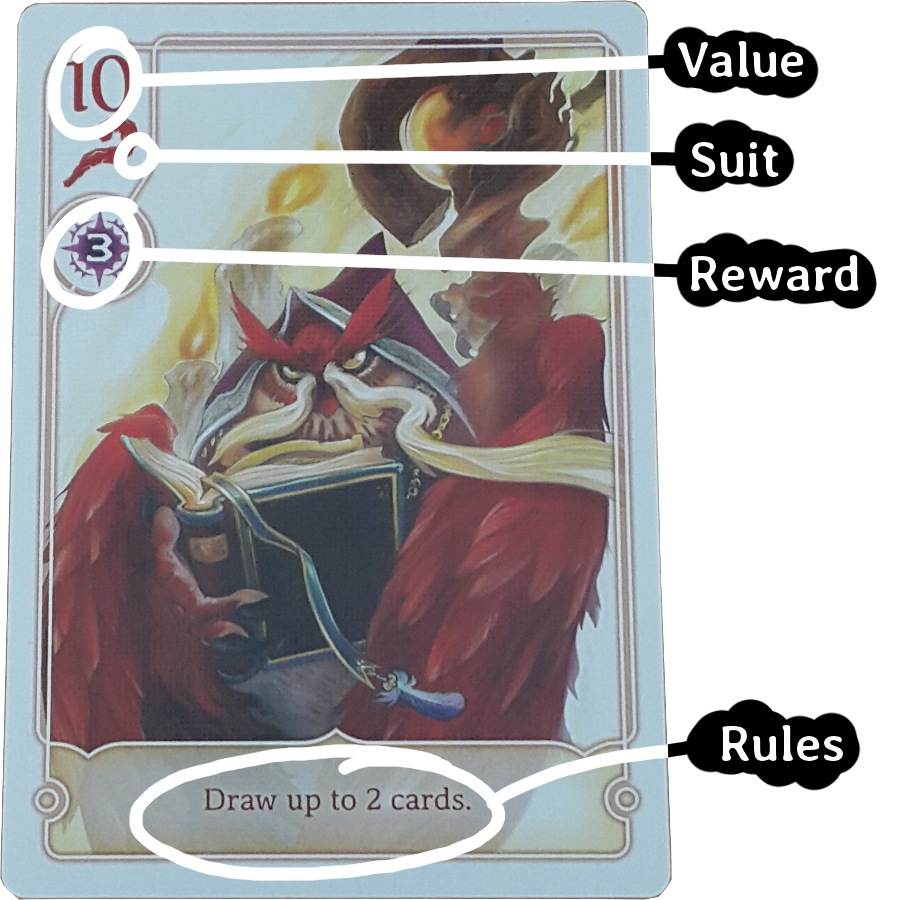 A dissection of the most complex card type, an Owl. The four components are really easy to signal. From top to bottom, the components of the card are:

Hocus’ components signal to me a game that’s done a lot of thorough, very specific examination of a game that was refined over and over. Which stands to reason – it’s a poker variant, and it’s flat-out honest about that.

The main things I see myself wanting to take away from Hocus are good ideas regarding the rules structure (pots, communities and pockets), but also its very strong, very clear idea of one of those procedural games I talked about, a game that’s composed of mathematically explicable pieces. Then, the designers layered atop the clear procedural components spicy, variant rules structures.