It’s no secret that I have Opinions about the golden age of adventure game, which is to say about 1985 through to 1995, the period when the genre of moon-logic point-and-click PC games expanded, explored, then catastrophically collapsed. But while having that grounding in the genre is useful for being able to speak authoritively about the way the genre developed, it can sometimes suggest that there are no games out of that period that did it well.

Well, let me tell you about an amazing point-and-clicker from 2008.

I love this game.

Look, every type of game – every type of media – has things about it that connect you to it. It has hooks, it has what we could if we’re smug and sneering, refer to as a locus of engagement, a special configuration of the things that get you into it. Some games do it with rhythm or failure states or a defiant you can’t beat me attitude, but for some games – games like Undertale or games like Army of Two, they are games that get you hooked in by being funny.

This is a risky proposition, because if your Funny Game isn’t Funny To Me, then I don’t care. Straight up. Nor should you – the idea that some games are just funny is a gross disservice to the wonderfully varied and manifold contextual weaves that is comedy. If a game isn’t funny to you, and it’s trying to be funny, it instead feels like sitting next to someone at the bus stop who is telling you bad jokes, and waiting for you to laugh, with big awkward pauses. It’s awful. 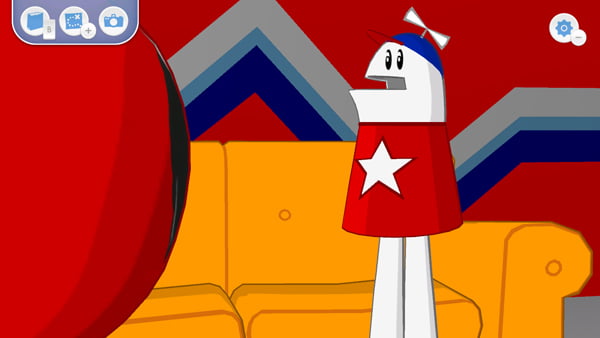 SBCGFAP is a point-and-click adventure game based around one of the more 00s cultural moments, the Homestar Runner universe. Ostensibly, Homestar Runner is a kids’ book series, filtered through…

You know it’s sort of hard to describe. Homestar Runner is a media space that does a lot of things that make it hard to classify. It’s a 90s kids’ book created by 70s kids who love 80s media as they developed as adults in the 00s. It’s a kids’ book as its initial framing, so you get characters with names like The Cheat and Marzipan, set in the home-town folksy charming place of Any Town USA, with a year-end celebration of Decemberween.

Straight up, you could do a really interesting cultural anthropology on how something like Homestar Runner even exists. There’s an interesting narrative about the way that the Flash medium taught the Brothers Chaps their particular style of animation, or the way that low-overhead distribution made them value particular kinds of audio settings, or the small production meant the media was all about the specific viewpoints of two very, very individualised Younger Brothers…

But that, it is, for another time.

Yeah But What The Crap About The Game?? 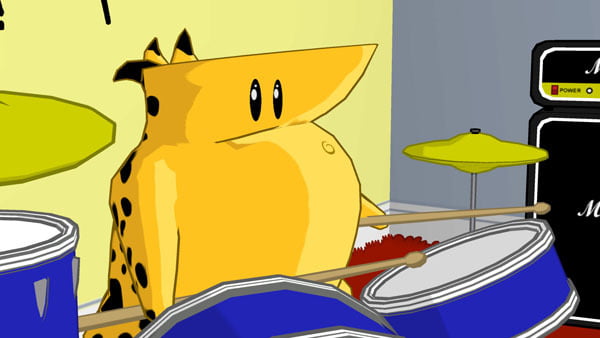 Here’s a testament to the long-lost art of good dialogue in this genre. When a dialogue puzzle is a rarity, a once-in-a-game kind of thing, you don’t tend to explore dialogue trees or pay attention to them, resulting in the dialogue puzzle hiding in a mass of stuff you’re already not looking at. Since dialogue trees are one of the cheapest forms of ‘content’ to make – a talking animation and a script are all you need to make it work, this means that there’s a lot of games of this style where the dialogue is entirely superfluous. Check out speed runs, or even efficient runs of point-and-click games, and notice how rarely you ever have to talk to anyone about anything, where the dialogue is entirely to facilitate clues about objects.

This sort of segregation means that players don’t tend to explore dialogue, and that further discourages the investment of dialogue exchanges with effort, like unique animations or performances. In SBCGFAP, though, there are a few dialogue puzzles – not a lot, a few – and dialogue tends to be accompanied with well-timed comedy riffs as well as fairly clear objectives. You want to ask about a party, you click the picture of a party, so you’re less likely to be trying to find some magical keyword that unlocks the next chunk of the game. 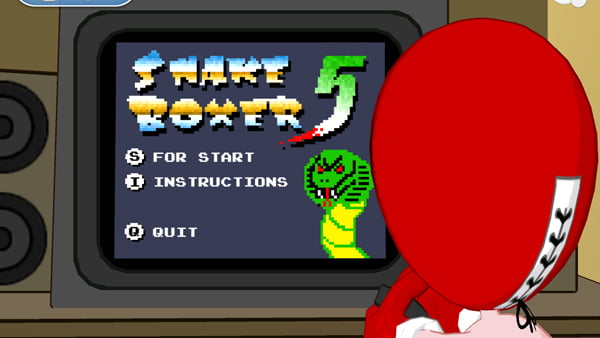 I don’t think this is a game that does a good job of introducing you to charaters and the series’ own particular absurdity, but as someone who has had this universe part of his life for twenty years I’m not sure I’m qualified to say how it looks to anyone outside it. The cast are all extremely odd, with a range of broad character quirks that the game both takes seriously and takes to extremes. That means that some of the puzzles rely on a worldview that may be a bit tricky to cotton at first – like that Homestar Runner is stupid enough to think that rubbing onions on himself will speed him up.

There is also the cloud of referential stuff in SBCGFAP. There are mini games, and object hunts, and mini-games for feeding object hunts, and that’s, you know, that’s cool, if that’s your thing. I personally find that particular experience very dull but I’m not about to tell you what you feel about it.  It is ignorable – you don’t have to chase down costume pieces and manual pages and play mini-games if you don’t want to, there’s no game content gated behind it. It is bonus content, stuff to play with, but nothing required. There can be some trickiness in trying to make sure you correctly identify the ‘bonus’ content rather than the ‘core’ stuff, but the game won’t punish you for wandering around with Teen Girl Squad stuff in your pockets that you don’t need.

You’ll hear the idea of Use Key On Door used when describing point-and-click adventure games, where most of them break down into a linear flow of trying to find a sequence. In a lot of cases, games break down into collecting a set of objects – D, B, F – and finding their correct correspondence to a series of setpieces, A, C, E. Before A and B have interacted, C, D, E and F are dead weight, and may even obscure the correct solution going forward.

This linear design is criticised, and rightly so in my opinion, because it tends to become very obvious when it’s overused – the only tools that the designer has to create difficulty or encourage creative thinking is to make some solutions really obtuse, often by making the character presenting them a useless jerk. There’s a fairly famous style of error, where a character with a sword, knife, and razorblade in their pocket will be flummoxed by a puzzle for a small piece of string, because the character refuses to cut the string with anything but a small pair of scissors.

It’s not that Key On Door design is necessarily flawed inherently, but it needs to have some sort of rationale to it, some sort of explicable consequence. In SBCGFAP, instead, you’re presented with a design that’s more about fulfilling a set of needs at once, in any order. It’s less Use Key On Door, and more Fill This Bucket. The game doesn’t care about what order you deliver the shaking doll, the temperature surprise, or the chat with Homsar, but each of those three gives you a reaction that suggests what the other two will be. The game even gives you checklists showing what you’re missing for some of the more obtuse puzzles. 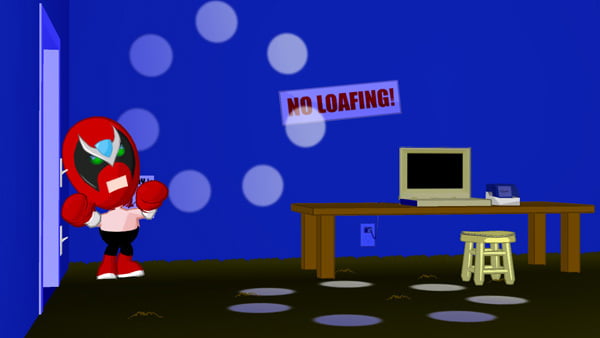 There’s an idea in game design called conveyance, which is the way a game encourages you to keep playing. The genre that we now know as point-and-click games were remarkably bad at conveyance, with many of them happily dropping the player in a dead end surrounded by things that don’t seem to do anything to deliberately confuse and delay them, often with solutions that were so maddeningly specific you weren’t so much trying to solve puzzles as you were trying to win a cryptic crossword puzzle designed by a total dick.

In SBCGFAP, this ‘bucket’ design works really well for conveyance. If a thing is part of filling a bucket, if you can ‘use it up’ when it’s fulfilled its purpose, then once you work out what it’s for you don’t need to keep track of it for all possible future puzzles. You don’t need to be worried that the game will need you to have not eaten the pie, later, as it were. One of the problems point-and-clickers have is that as the game opens up, every single thing introdued increases the number of potential interactions by the number of every other possible object.

When your opening room has five things in it and you can do one thing to them, that’s five options. When you’re carrying twelve items across four zones which each contain ten items, and the items can be used on one another and the order of operations can be important (is USE EGG on BRICK the same as USE BRICK on EGG?), then the possibilities you have before you are incalculably complex. Bucket design lets you cut down on options and make the game less linear.

That also means you can, as it were, chuck a bunch of things into the bucket, and in so doing, eliminate them from your possible options.  Then that gets filtered through a lacksadaisical, heck-around goof-off nature of the pranky, high-stakes low-stakes nonsense universe of the eternally summering kid works really well. You can endlessly retry things because nothing you do is that important even if you want to treat it like it’s incredibly important.

It’s available on Steam and GoG. It’s also surprisingly child-approachable, even though the jokes do fly high a fair bit.