When you write a story, writing a magic trick is comparable to writing a murder mystery. You need for the thing to be perceivable as impossible at first, and to convey it as if it is what was happening. You need to not just let the reader mislead themselves by the performance, but you need to mislead them by your word choice. You can’t rely on the way they choose to focus their attention, they have to focus on your words.

It’s doable but it’s deeply unsatisfying by comparison to an actual performance. Explanations are also hard, because you often rely on conveying mechanical interactions that are usually by definition non-obvious. A number of card tricks cook down to ‘she used her hands’ or ‘she moved a card you weren’t looking at’ which is just kinda boring when you explain it in text.

You can write magic however you like, with the fireball arcing through the air and exploding in acrid lines of sulfurous pain, or the transformation rippling through his flesh, unweaving and remaking what was never should, that figure now standing where she had not been a moment before, or even something as simple as the werewolf puked and died.

Now imagine what it was like to handle magic systems in games that were entirely text. 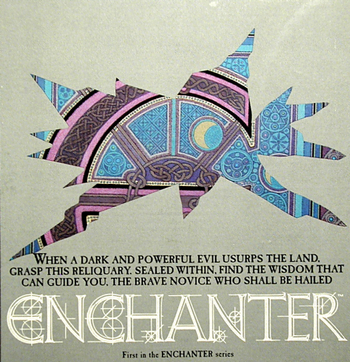 The Enchanter trilogy – Enchanter, Sorcerer and Spellbreaker, were a set of Infocom text adventure games from 1983 through 1985. If you’re not familiar with how Infocom worked, these games sort of set a standard for text adventure games with what was at the time a pretty impressive parser. It was capable of things like containers (put SHOE in BAG) and alternative terms (put HEEL in BAG) and some degree of prepositions (put HEEL on top of BAG). These games are, for the time, pretty painstakingly made, with a lot of unique responses to input, which is, I guess, something you can do when you’re dealing primarily with the text engine and don’t have to worry about music or graphics.

The most commonly known and referenced Infocom game is the iconically famous Zork series, and then probably the next most well known is The Hitchhiker’s Guide To the Galaxy, games that are often renowned for being difficult and unfair, with Douglas Adams referring to Guide as being ‘user-mendacious.’ There was a deliberate attempt to make these games last longer through being extremely obtuse, while still wanting to hold to a principle of being solvable and sensible.

Enchanter differs from the Zork and Guide by being about someone with an actual competence; in Zork games, you typically are playing a nondescript person who has no reason to be aware of the world around them, no memories to consult, no history or anchoring to the place you’re in, creating the term that the Zork games eventually riffed off themselves, the Ageless Faceless Gender Neutral Culturally Ambiguous Adventure Person. This person didn’t really have a skillset of their own that the story didn’t introduce to you after you started. You could take some assumptions, in that once you had an axe and a sword you could sword or axe a troll, but there didn’t seem to be any of the (realistic) relationship to the idea that these weapons actually require a degree of training to use. In Enchanter, you’re a spellcaster, someone with access to magic.

This magic is, of course, an incredible pain in the arse to use.

The magic system in Enchanter is only really usable as a type of verb; so you you can NITFOL an object, and that casts NITFOL on something. The whole game then becomes about doing a variety of very typical, conventional actions – like unlocking doors, moving turtles, unlocking elaborate puzzle eggs – and then mixing in really complicated weird actions, involving finding spells, using spells, and then using those spells to let you overcome things later. It’s not a fireballs and thunderbolts magical universe, it’s just an expanded toolset.

And then, you realise, that you can type a spell’s name backwards, and get a reversed version of its effect.

It’s actually pretty rare that text adventure games feel expansive; it’s very common for them to feel tight and confined, like a ghost train or a sled ride, where you’re just causing the next event to happen at the right time. In these games, though, when you discover the way spells work and the way you can reverse them, you suddenly run around re-trying things, trying to discover if there’s stuff you should have known, or stuff that is transformed by the knowing. It’s really interesting.

The actual narrative from Enchanter through to Spellbreaker is honestly pretty excellent; it’s got this repeated theme about how power is not as important as using it well; that containment of dangerous elements and surrender of power, if necessary, are worth doing if you find you’re operating within a broken system. The story starts out a bit ‘kid adventurer doing a spell’ and ends up at ‘haggard recognition of the fundamenal failing of magic as a system.’

The games are abandonware now, and you can fit all of them in less space than your phone’s wallpaper, if you’re interested. The main thing to understand about them as far as I’m concerned, though, is that this concept space is really videogame narrative honed down to its narrowest point: There’s nothing this game can do to keep you engaged but continued access to the narrative that is set up before you, in the order you can manage and discover.